As I travelled around Inishmore (Inis Mór), the largest of the Aran Islands in Galway Bay, earlier this week, I visited a number of churches, including Saint Benan’s Church in Killeany, said to be the smallest church in Europe if not in the world, and the two churches, Saint Breacan’s Church and the ‘Church of the Hollow,’ at the monastic site known as the ‘Seven Churches.’

Other churches were pointed out along the way, including Teampaill Chiarán (Saint Ciaran’s Church), dating from sixth century and now used for Father Dara Molloy’s ‘Celtic Weddings.’

I was told how Teampaill Asurnaí is the only church on the island named after a female saint – Saint Surnaí who is buried nearby. Teampaill an Cheathrair Álainn (the Church of the Four Beauties) is named after Saint Fursa, Saint Breandán, Saint Conall and Saint Bearchán – although all four beauties were men.

Signs beside the ascent to Dún Aoghasa point to two churches, Teampaill na Naomh (the Church of the Saints) and Teampaill Mhic Duach, an 11th century church dedicated to Saint Colmán Mac Duach. 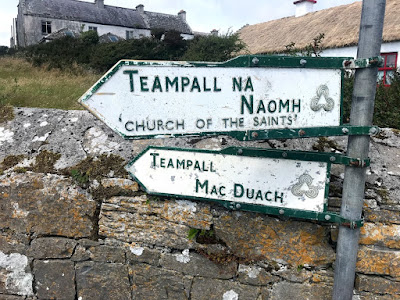 But the popular tourist maps and the signposts do not point to the ruins of Saint Thomas’ Church, the church that served the small Church of Ireland or Anglican community in Kilronan from the 1840s to the mid-20th century.

The Aran Islands appear to have had a sizeable Protestant population since the 1650s or 1660s. Seventy troops were continually based on the island for many years to quell any rebellion and over time some of the soldiers settled there.

Simon Digby, Bishop of Elphin (1691-1720) and a former Bishop of Limerick (1679-1691), bought the Aran Islands in the early 18th century for £8,200 from the representatives of John and Richard Fitzpatrick and Sir Stephen Fox. The Digby family and their descendants in the St Lawrence family continued to hold vast tracts of island land for 200 years. However, it took more than a century after Bishop Digby bought the Aran Islands to provide the islands with a Church of Ireland parish church.

At the time of Griffith’s Valuation of the Aran Islands in 1837, there was a Church of Ireland church in Kilronan and at least one school. 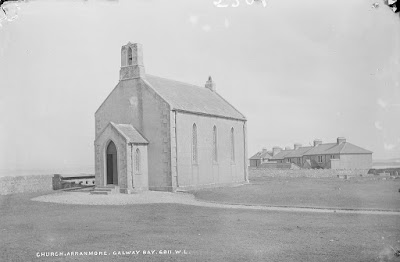 Saint Thomas’ is a small church that was completed in 1846, during the Great Famine. Until then, the Aran Islands had been part of the Clifden union of parishes in the Diocese of Tuam.

The first permanent Church of Ireland priest on the island, the Revd Alexander Synge (1820-1871), from Glanmore Castle in Ashford, Co Wicklow. He arrived at a time when the three islands in the Aran Islands had a population of 3,333.

Synge’s battles with the fishermen of the Claddagh in Galway remain part of local lore and legend on the Aran Islands. Synge operated a small fishing boat, the Georgiana, but the Claddagh fishermen claimed all fishing rights in Galway Bay and challenged his trawling methods.

The Claddagh men attacked Synge and his crew at the fishing grounds, and during a visit to Galway he was attacked on the streets by the Claddagh women, although he escaped without serious injury. An uneasy peace was reached when he helped organise assistance to get better fishing gear for the Claddagh men.

Alexander Synge was an uncle of the playwright John Millington Synge (1871-1909), who is more closely associated with the middle island, Inish Meáin. Alexander Synge later became Vicar of Ipswich. 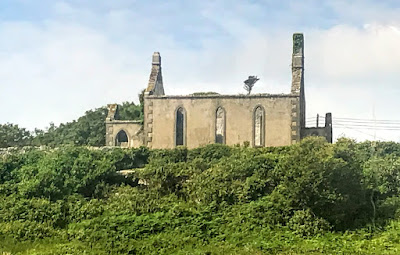 The roof was taken off Saint Thomas’ Church in the 1960s (Photograph: Patrick Comerford, 2019)

Synge was followed by the Revd William Kilbride in 1855. Kilbride had a genuine interest in the ancient monuments of Aran and a keen interest in the Irish language. He had been a Bedell Scholar in Irish in Trinity College Dublin (1847), had served as a curate on Achill Island, but had been assaulted at Derygimla and Clifden because of his missionary work.

Although Kilbride was a member of the Gaelic league, his time in Aran brought him into conflict with the Land league, which had strong support on Inishmore. The story of those times is told in Tim Robinson’s ‘Stones of Aran’ books, Labyrinth and Pilgrimage, and in Miriam Moffit’s Soupers and Jumpers.

At the south end of the church are some older graves and at the north end are two fine headstones. One is in unusual Irish and is dedicated to the memory of Kilbride’s wife, Máire, who died in 1891. The other is to a young Scottish boat builder, James R Sim, from Fraserburg in Aberdeenshire. He was 25 when he died in 1904 and the monument was erected by his heartbroken young wife, Sarah.

At its peak, the Anglican community on the island only ever numbered about 25 to 30 people and many of these were coastguards who came and went. Kilbride remained the Rector of the Aran Islands until he died in 1899.

The next and last rector was the Revd Landen Thomas Lennon, who was born in Kilrush, Co Clare. But Church of Ireland numbers on the island dwindled by the early 20th century.

The Commissioners of National Education reported in 1914 that ‘the number of Protestant children on the Inishmore Island is very small, and they have the opportunity of attending the national schools on the island, which are open to children of all denominations.’

Lennon met the widowed Catherine Philpot Curran Davis, daughter of Charles Curran, a journalist and a descendant of the celebrated lawyer John Philpot Curran (1750-1817), when she visited Aran in 1901 with her nephew during a tour of Europe with her nephew. They kept in touch by correspondence and were married 13 years later in Saint Nicholas Collegiate Church, Galway, on 30 April 1914. They gave their addresses as the Royal Hotel, Galway, and the Railway Hotel, Galway. When they finally left Aran, they moved to another island: an inland island on Lough Corrib.

After the formation of the Irish Free State, most of the coastguards sent to Inishmore from Britain were English Roman Catholics. Most of the English-born coastguards seem to have left in the 1920s and 1930s.

The Anglican community on the Aran Islands went into decline. Occasionally, the Rector of Galway would visit and say prayers of remembrance for people buried there. The roof was removed in the 1960s, the ruinous state of the church accelerated, and a sturdy sycamore tree now grows within the walls of the former church.

The Aran Islands remain part of the Galway Group of Parishes, where the principal church is Saint Nicholas Collegiate Church and the Rector is the Very Revd Linda Peilow, Provost of Tuam. 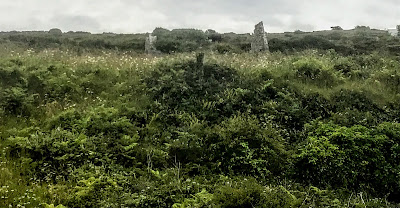 The ruins of Saint Ciaran’s Church, said to date from the sixth century (Photograph: Patrick Comerford, 2019)

You might be interested in an essay I published on Protestant (Anglican) missionaries and the teaching of the Irish Bible:

'The Irish Society: Bible and Language in Ireland and Tipperary' - Tipperary Historical Journal, 2018.

I can email a copy if you wish.