Half a century later,
Centre Point is still
‘coarse in the extreme’ 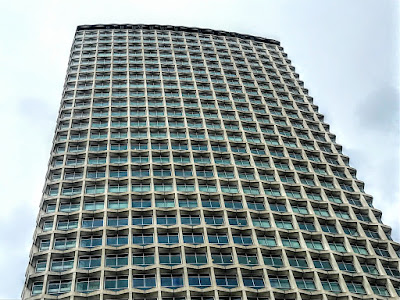 Centre Point … still a landmark building in London after half a century (Photograph: Patrick Comerford, 2019)

When I began training as a chartered surveyor after I left school, one of the modern wonders of the property developers’ word was Centre Point, a large, multi-storey office block that stood empty for years.

It was controversial even then, when it was seen as being brash and crude. It featured on television programme and on the cover of book, and half a century ago it was at the heart of many protests that were closer to my heart then than the training was going through with a large property company and the College of Estate Management at Reading University.

Yet Centre Point was held up as an object lesson to my generation of the ‘build-em-high’ approach in the property world at the end of the 1960s and in the early 1970s, and Harry Hyams, its developer, was held up as an innovative, entrepreneurial developer who managed to build up his portfolio and amass his wealth with a minimal staff.

Harry Hyams (1928-2015) made much of his fortune developing office space in London in the 1960s and 1970s when rents there were rising significantly. He preferred to find single, blue-chip tenants for his properties, having them fully repair and insure the buildings they occupied.

This approach allowed him to manage a valuable and sizable property business with a staff of just six. He also used that as justification for keeping Centre Point empty for years after it was completed, claiming he could find no tenant willing to lease all the space.

The negative reactions created by Centre Point were in sharp contrast to the positive acceptance of the nearby Post Office Tower (now the BT Tower), with its revolving restaurant.

All these memories came back in London last week as I walked back to the St Giles Hotel in Bloomsbury from Westminster, along Whitehall and Charing Cross Road, and found myself in front of Centre Point at 101-103 New Oxford Street and 5-24 St Giles High Street. It also has a frontage to Charing Cross Road, close to St Giles Circus and is almost directly above Tottenham Court Road Underground station.

Centre Point was built between 1963 and 1966 as speculative office space by the property tycoon Harry Hyams, who leased the site at £18,500 a year for 150 years.

This was one of the first skyscrapers in London. It is a 33-storey tower, with 27,180 sq metres of floor space. A nine-storey block beside it has shops, offices, retail units and maisonettes, and there is a linking block between the two at first-floor level.

The building was designed by George Marsh of the architects R Seifert and Partners, and was built by Wimpey Construction for £5.5 million.

Hyams wanted one single tenant for the whole building. Because he was a tough negotiator, the building remained vacant for many years after its completion in 1966.

Property prices were rising at the time, and most business tenancies involved leases for set periods of 10 or 15 years. Hyams could afford to keep Centre Point empty and wait for his single tenant at his asking price of £1.25 million. He was challenged to allow tenants to rent single floors, but consistently refused.

Because it was vacant for so long, it became known as ‘London’s Empty Skyscraper.’ Skyscrapers were rare in London, and Centre Point became a focus for protests in London.

The homeless charity Centrepoint was founded in 1969 as a homeless shelter in nearby Soho, and named Centrepoint in response to Centre Point being seen as an affront to the homeless because it had been left empty as Harry Hyams saw the value of his property portfolio increase.

An umbrella group of Direct Action housing campaigners, including Jim Radford, Ron Bailey and Jack Dromey, organised a weekend occupation of Centre Point from 18 to 20 January 1974 to draw to the housing crisis in London as Centre Point remained vacant.

Eventually tenants were found in 1975. From 1980 to 2014, Centre Point was the headquarters of the Confederation of British Industry (CBI).

Although Centre Point became a Grade II listed building in 1995, and won the Concrete Society’s Mature Structures Award in 2009, it was never really a pretty site. Perhaps the iron is not lost that the site was once occupied by a gallows.

A promised transport link never materialised, the pedestrian subway attracted anti-social activities, the building was cited as an example of bad design, badly-designed pavements were forcing e pedestrians into the bus lane and reports pointed to the highest level of pedestrian injuries in Central London.

Recently, it was bought by Almacantar, and was converted from office space to luxury flats in 2015 by Conran and Partners.

As I looked up at Centre Point that grey and wet afternoon last week, I had to agree with England’s greatest architectural historian and critic, Sir Nikolaus Pevsner, who once described Centre Point as ‘coarse in the extreme.’