Rejoice with me, for I have
found what I had lost. I tell you,
there is joy among the angels 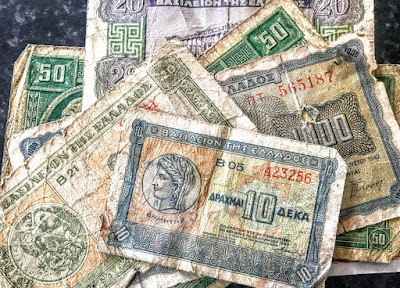 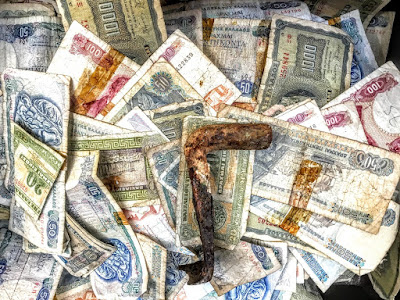 Torn and ragged drachma banknotes in a tin box outside an antiques shop in Rethymnon in Crete (Photograph: Patrick Comerford, 2019)

In our Gospel reading this morning, Christ speaks in three parables of things lost and found: the one lost sheep among 100; the one sinner who repents in contrast to the 99 righteous people; and the woman who has lost a small coin that others might not even bother to look for.

In the story of the shepherd who has 100 sheep and goes looking for one lost sheep, a rich man shows us how God behaves.

In the story of the woman who has ten silver coins, and who sweeps thoroughly through every dark corner of her house until she finds one lost coin, a poor woman shows us how God behaves.

The first image reminds me how in Achill I once heard about a shepherd who died on a cliff side as he went in search of a lost sheep, and slipped on the edge. A local man reacted by pointing out what a small price sheep fetched in the mart in those days.

When you do find a lost sheep, it has probably been caught in brambles, is full of dirt and matted with droppings. It is not a pleasant fluffy creature, as seen in so many stained glass windows. It may not even be worth bringing home, in the eyes of a shepherd or a sheep farmer. In its panic and distress, it will have lost weight, and may not be possible to sell.

We also have a poor woman who shows us how God behaves.

Ten drachmae might have been a nice sum of money at the time, but was one small coin worth all that time, worry and energy?

I was working in Greece some years ago at a time when the Drachma was being phased out as the national currency, and the Euro was being introduced.

So, a drachma in my days was worth about as much as a farthing. And when Greeks hear this morning’s Gospel reading, they hear about the woman sweeping her house, searching not for a valuable silver coin but for a tiny worthless coin, searching for a farthing.

I came across a book a few years that took a light-hearted introduction to Classics, Ancient Athens on Five Drachmas a Day (2008). But you probably would not have been able to even buy a bottle of retsina or a bottle of ouzo in ancient Athens for half of what this woman had saved.

And how the tax collectors who heard this parable (verse 1) must have laughed with ridicule! Finding a drachma certainly was not going to help the party spirit, never mind being worth considering for taxes and tax collecting.

Today is Vocations Sunday in the Church of Ireland.

Our Gospel story provides us with examples of varieties of people who respond to God’s call, who are caught up in God’s call: men and women, young and old, rural and urban, rich and poor, the valued and those who are without value in the eyes of others … even the person seen by others as a sinner cannot escape God’s call when it comes.

They ask: ‘How does God call his people to their vocations?’

Vocations are often hidden: either the person engaged in ministry is not recognised for what they are doing, or someone who has the call to ministry needs someone else to uncover, reveal that call, take a light and shine on it wherever it may be hiding.

These parishes may well survive without me. But they are not going to survive without your ministry. The ministry of welcome, hospitality, service; those of you serve on vestries, as wardens, looking after music, finances or buildings, those of you are the face of the church in local society, local life.

This sort of ministry comes in many shapes and forms. It includes part-time and full-time commitments, and now in this diocese we are trying to encourage Ordained Local Ministry, where people continue to be involved in parish and local life, but help to sustain and grow the ministry of word and sacrament in one particular parish or group of parishes.

It may be for you. It may not be for you. But it is for each and every one of us to search out those we think may be called to one of these forms of ministry.

That could be your call. To seek out someone who has a call to ministry but it is unsure about, perhaps even afraid of it, afraid of the commitments or the consequences, or thinking like the lost sinner that God would never call them.

It may be your vocation to be like the shepherd who goes after than one sheep in 100, or the woman who sweeps out her house in search of that one lost coin among ten.

Think about it: it may be that your ministry is being well-exercised in this group of parishes, even though it may not be properly acknowledged or appreciated.

But it may also be your role, like that shepherd or that woman, to seek out that one precious person who is being called by God, but is afraid or embarrassed to answer the call. 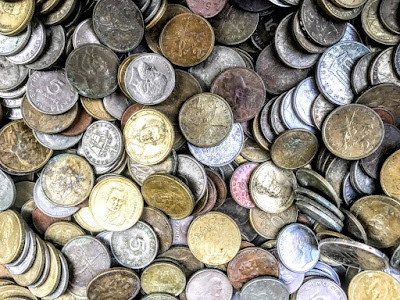 Old drachmae coins in a tin box outside an antiques shop in Rethymnon in Crete (Photograph: Patrick Comerford, 2019) 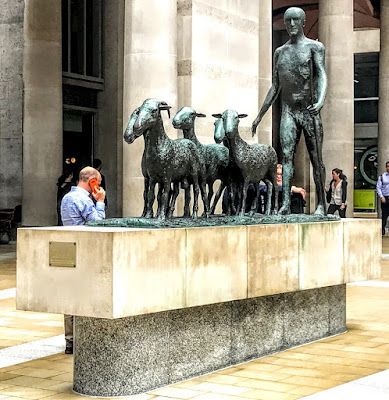 ‘Which one of you, having a hundred sheep and losing one of them, does not leave the ninety-nine in the wilderness and go after the one that is lost’ (Luke 15: 4) … ‘Paternoster’ or ‘Shepherd and Sheep’, a bronze sculpture by Dame Elisabeth Frink in Paternoster Square, near Saint Paul’s Cathedral, London (Photograph: Patrick Comerford, 2019)

The Collect for Vocations to Holy Orders: