Could the Pharisee
have gone down to
his home justified? 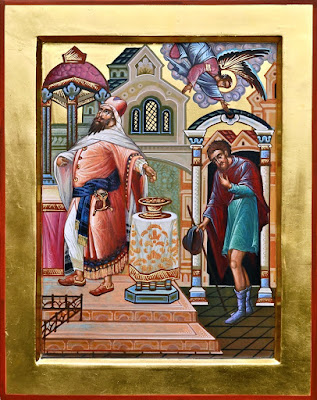 A contemporary icon of the Pharisee and the Publican praying in the Temple … who were the Pharisees and who is being criticised?

We are so familiar with this parable that we often dismiss the prayer of the Pharisee, although the Gospel reading says there is nothing wrong with his prayer. Quite the opposite.

Yet this parable has been so mis-used and so misinterpreted in the past, that common language often uses the word ‘Pharisee’ to describe a religious hypocrite or someone who fails to put into practice in daily life what they claim as their firmly held religious views.

We might wonder why, for example, the word Sadducee never passed into popular language in the same way, although Jesus also has bruising encounters with the Sadducees throughout the Gospels.

Indeed, the misuse and abuse of the name Pharisee may have fuelled antisemitic rhetoric at different times during the history of the Church. And, as I write, I am conscious that tomorrow is the first anniversary of the shooting that killed 11 people at the Tree of Life synagogue in Pittsburg, Pennsylvania.

It is difficult, at times, to explain that the true heirs of Pharisaic or rabbinical Judaism are all modern schools of Judaism today. Of all the various schools of Judaism at the time of the Gospels – including the Pharisees, the Sadducees and the Essenes and the Sicarii – the Pharisees and the followers of Jesus are the only two to have survived, although some historians have also sought an early origin for the Karaites.

Judaism and Christianity share a common tradition that has developed from synagogue or rabbinical Judaism, and any misinterpretation of the word Pharisee is an insult to the modern heirs or rabbinical or Pharisaic Judaism in all modern Jewish traditions, including the Orthodox, Conservative, Reform, Liberal, Progressive and Reconstructionist movements.

A conference in Glenstal Abbey two weeks ago [12 October 2019] was titled ‘Pharisees: Characters not Caricatures.’ The images of Pharisees in the Gospels include Simon, Nicodemus, Gamaliel and Paul himself, and their contemporaries included Josephus.

The conference organisers pointed out that ‘it is not necessary to make the Pharisees look bad for Jesus to look good. Jesus can look good all by himself! Pharisees were well regarded by the wider populace of their day. Avoiding a pantomime portrayal of the good and the bad leads to a more fruitful exploration of Jesus’ interaction with this interesting, diverse and nuanced Jewish group of the first century.’

The name Pharisee comes from Aramaic and Hebrew words meaning ‘the separate ones’ – although a minority view has also tried to find its roots in words for a Persian or Persians.

It is not surprising, then, that many Biblical scholars have drawn close parallels between the beliefs and teachings of Jesus and the Pharisees, and some have even asked whether Jesus himself was a Pharisee.

The Jewish historian Joseph Klausner (1874-1958), in his book Jesus of Nazareth (1922), tried to understand and present Jesus in his historical context, presenting a study of Jesus to a Jewish public in Hebrew.

Klausner claims, ‘Jesus of Nazareth ... was exclusively a product of Palestine, a product of pure Judaism, without any external additives. There were many Gentiles in Galilee, but Jesus was not at all influenced by them ... Without exception, his teaching can be explained entirely through the Biblical and Pharisaic Judaism of his time.’

In an attempt to place Jesus more precisely in his context, Schalom Ben-Chorin (1913-1999), in Brother Jesus. A Jewish point of view on Nazareth (1985) writes: ‘In this sense, we believe not to err in letting Jesus be amongst the Pharisees, naturally in the middle of a lower group of opposition. Jesus himself taught like a Rabbi Pharisee, and with a high level of authority, whose excessive emphasis must then be without doubt considered like a kerygmatic tradition.’

The argument that Jesus was part of a group of Pharisees is now made now by many scholars, and not only Jews. Examples include William E Phipps, Jesus, the Prophetic Pharisee in the Journal of Ecumenical Studies 14 (1977), pp 17-31.

The late Rabbi Harvey Falk’s book, Jesus the Pharisee. A New look at the Jewishness of Jesus (Paulist Press, New York 1985), is a provocative study of the thought of the Pharisees in the time of Jesus and was an early attempt by a rabbinic writer to demonstrate that Jesus of Nazareth consistently upheld the views of the rabbis of the School of Hillel, and that all his criticism was directed at the School of Shammai and their followers.

The Pharisees of Bet Shammai controlled Jewish life and thought in the first century. This school denied salvation to the Gentiles, and the Shammaite Pharisees and priests considered Jesus a danger to the Jewish people.

When the School of Shammai disappeared after the destruction of the Temple in Jerusalem in the first century, Judaism developed according to the teachings of Bet Hillel. This alone increases the common grounds for dialogue between Jews and Christians.

The idea that Jesus was a Pharisee may still be shocking for many, and indeed it cannot be proved by any sources, from the New Testament or others. But, as Joseph Sievers points out in his paper, ‘The Roots of anti-Judaism in the Christian environment: Jesus Of Nazareth as seen by Jewish writers of the XX century’ (Nuova Umanità 64/65 (July-October 1989), pp 125-136), it is a concept that indicates a truth that is often forgotten: that many of the teachings of Jesus are not far from those of many Pharisees or Rabbis, and their successors.

In fact, even if Jesus did want to create polemics with the Pharisees, in no way would his teaching in itself put him out of the realm of Judaism. The fundamental theory of Ben-Chorin is ‘that underneath the Greek face of the Gospels there hides, so to speak, an original Jewish tradition, in that Jesus and his disciples were Jewish, purely and solely Jewish.’

In many cases, Jesus was in substantial agreement with the Pharisaic school of Hillel. Although at the time it represented a minority of rabbis and Pharisees, this school later became the determining group within post-Temple Judaism.

Meanwhile in the US, the Anti-Defamation League reported this week that at least 12 white supremacists have been arrested for alleged roles in terrorist plots, attacks or threats against the Jewish community in the year since the massacre t the Tree of Life synagogue in Pittsburg, Pennsylvania. These include another shooting in April at a synagogue in Poway, California, in which one person was murdered and others were injured. We need to be very careful how we use parables and Gospel images in ways that are unquestioning about prejudices we have inherited from the past and that fail to look at Gospel stories in their full conext.