The Synagogues of Dublin:
15, Grosvenor Road 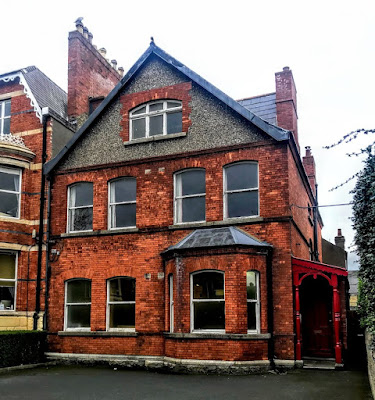 There was a synagogue at 52 Grosvenor Road from 1940 to 1948, when the congregation moved to Rathfarnham Road, Terenure (Photograph: Patrick Comerford, 2019)

At first, the congregation rented rooms from 1936 at 6 Grosvenor Place, Rathmines, a large Victorian suburban house in a residential area close to Rathmines and Rathgar and just off Kenilworth Square.

However, the rented rooms were too small for the new congregation, and in April 1940 they bought another house nearby, at 52 Grosvenor Road with a loan from the Provincial Bank. The small synagogue at 6 Grosvenor Place may have been one of the shortest-living synagogues in Jewish history in Dublin.

The houses on Grosvenor Road were designed and built by Edward Henry Carson (father of Sir Edward Carson), George Palmer Beater, and the brothers James and William Beckett – William Beckett was the grandfather of Samuel Beckett.

But this terrace of houses on Grosvenor Road was designed by the architect Alfred Gresham Jones (1824-1915). It has been described by Jeremy Williams in his book, Architecture in Ireland 1830-1921, as ‘the most ambitious Gothic Revival speculative terrace built in the Dublin suburbs.’

The Winter Garden was an ambitious project that included heated winter gardens. All that remain of this incredible structure, known as the Crystal Palace, are a few statues and rustic grotto in what are now the Iveagh Gardens, the original site of the palace.

For reasons unknown, Jones and his family – at the height of his prolific career in Dublin – emigrated to Australia in 1888, where he established an architectural practice and wrote poetry.

However, the Rathmines congregation did not stay for long at 52 Grosvenor Road. At Rosh Hashanah in 1948, they moved to a Nissen hut at ‘Leoville,’ opposite the Classic Cinema on Rathfarnham Road in Terenure.

The house was bought by the Society of Saint Vincent de Paul, which in turn sold it as a parish centre to the Roman Catholic Parish of the Three Patrons in Rathgar. No 52 Grosvenor Road was bought with a loan of £2,000 (€2,500).

Today, the parish youth club has priority for the use of the centre, but it is also used for religious instruction classes and for parish organisations and outreach activities. 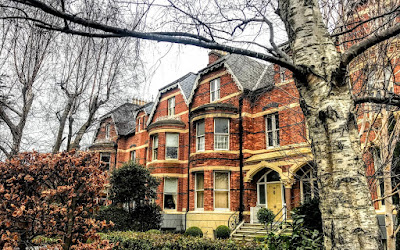 The terrace of houses at Grosvenor Road was designed by the architect Alfred Gresham Jones (Photograph: Patrick Comerford, 2019)