Walking though Jewish
Bratislava, with its
memories and graves 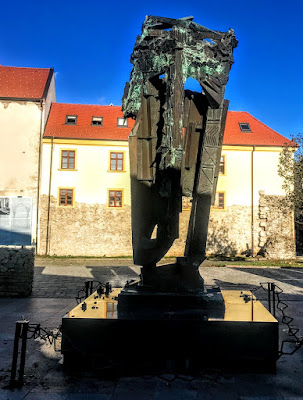 The Holocaust Memorial in the centre of Bratislava on the site of the former Neolog Synagogue (Photograph: Patrick Comerford, 2019)

Bratislava has been an important centre of Jewish life and education for centuries. But the story of Jews in the city is a tragic one, with forced exiles, the horrors of the Holocaust, and, in the decades immediately after World War II, the destruction of Jewish heritage during the Communist era.

Today, however, many former Jewish buildings, streets and memorials are showing signs of the efforts being made in Bratislava today to recover and remember the stories of the Jewish community and their culture.

Jews moved through this part of central Europe from the 1st century AD, but there are no records of them settling here. However, Bratislava had its own mediaeval Jewish ghetto by the 13th and 14th centuries, when Jews could live in the fortified free city. The original part of the mediaeval fortification is still found between the monastery of Ursulínok and the entrance to the former department store Dunaj and the Ministry of Culture.

These early Jews in mediaeval Bratislava were employed in finance, as merchants, craftsmen, artisans and even winemakers and they lived in the areas of today’s Nedbalova Street, Františkánska Street, Zámočnícka Street and Baštová Street. King Andrew II of Hungary issued a decree in 1229 granting the Jewish minority equal rights as the citizens of Bratislava. 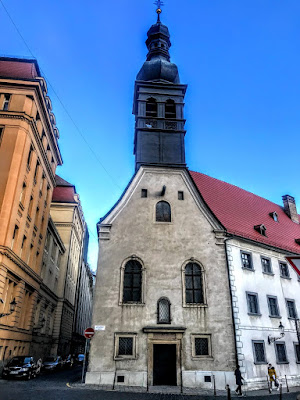 The earliest synagogue in Bratislava stood by the site of the present Ursuline Church (Photograph: Patrick Comerford, 2019)

The synagogue in mediaeval Bratislava was first mentioned in 1335, when Pope Benedict XII reported to the Archbishop of Esztergom that the Cistercian monks had complained about the disturbing noise coming from this synagogue.

The Cistercian cloister stood near the today’s cloister on Uršulínska Street with the synagogue beside it. The Pope had the Archbishop investigate the situation and the synagogue was demolished soon afterwards. The Arcadia Hotel where I am staying is immediately west of this street corner.

The synagogue was rebuilt in 1339, and in the 14th century there were several hundred Jews living in Bratislava and the city. They had a synagogue, a Jewish cemetery, a mikveh and other public Jewish institutions.

Jews were expelled from Bratislava for the first time in 1360, and the synagogue was destroyed. Several Jewish families had returned to the city by 1368, and they were given permission in 1399 to build a synagogue, probably on the site of the earlier one. By the end of the 14th century, about 800 Jews were living in the city, which had a total population of 5,000 by 1435. 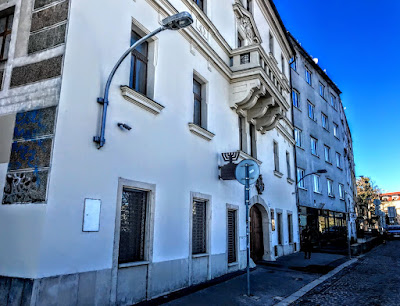 During the first half of the 15th century, Jews were forced to live in a Jewish ghetto on Židovská Street (Jewish Street), known as Judengasse. The street was on the slopes beneath the castle and was not considered to be in the city itself.

The Jews were expelled and accepted back several times, and from 1599 Jews were encouraged by the Pálffy family to settle once again in Židovská Street and the area beneath the slopes of the castle. The street had two gates that were closed by the city guards at night.

To the south-west, beside the tunnel that runs under the castle and close to the banks of the Danube, the Chatam Sofer Memorial, commemorates the city’s most famous Jewish scholar, Moses Sefer (1762-1839), also known as Chatam Sofer. 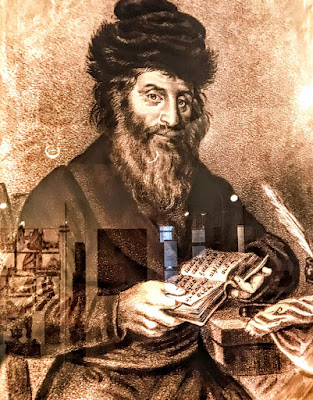 A portrait of Chatam Sofer in the Jewish Museum (Photograph: Patrick Comerford, 2019)

The city was part of the Kingdom of Hungary in 1806 when Rabbi Moses Sofer set up the Pressburg Yeshiva. The city became the centre of intellectual life of Central European Jewry and a leading force in opposition to the Reform movement in European Judaism.

Chatam Sofer and three generations of his descendants headed the Pressburg Yeshiva or Bratislava Yeshiva. This yeshiva produced hundreds of future leaders of Austro-Hungarian Jewry who were a major influence on the general orthodox tradition and future Charedi Judaism.

A new law in 1840 gave Jews freedom of residence, and wealthy Jewish families moved to other parts of the city. A fire in 1913 caused the old Jewish district to fall into disrepair. Following the formation of Czechoslovakia 100 years ago in 1919, many Bratislava Jews owned businesses, and many worked as doctors, lawyers, engineers, teachers or artists. 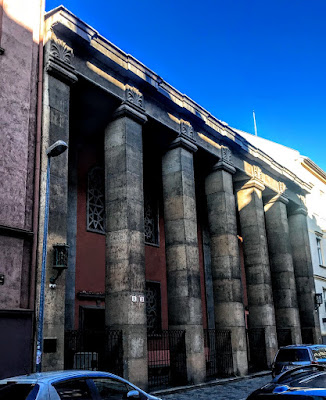 The last surviving synagogue in the city is at Heydukova ulica 11 (Photograph: Patrick Comerford, 2019)

By the early 1920s there were about 11,000 Jews in Bratislava: 3,000 Neolog and 8,000 Orthodox. The last surviving synagogue in the city, at Heydukova ulica 11, was built in 1923-1926, and was designed by the architect Artur Szalatnai-Slatinsky.
In the late 1930s, antisemitic riots threatened the Jewish population of Bratislava, and Imi Lichtenfeld helped to defend his Jewish neighbourhood against racist gangs. Violent attacks were carried out against Bratislava’s synagogues and the Pressburg Yeshiva on 11 November 1938, and sporadic pogroms continued during World War II.

After the formation of the Slovak State in March 1939, the regime imposed discriminatory measures against the Jewish population. The deportation of Jews from Slovakia began on 25 March 1942. German forces occupied Bratislava in September 1944 and most of the remaining 2,000 Jews in the city were sent to Auschwitz.

More than 15,000 Jews were living in Bratislava in 1940; about 3,500 survived World War II. On April 15, 1945, Max Weiss became the chairman of the revived Jewish community and prayer services were renewed in the Heydukova Street Synagogue. 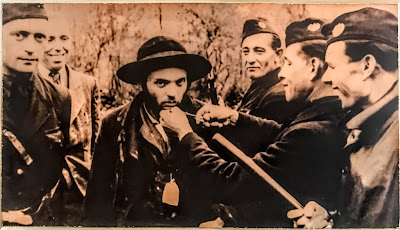 A reminder of the Holocaust in a photograph in the Jewish Museum (Photograph: Patrick Comerford, 2019)

Of the 30,000 Jews who remained in Slovakia at the end of World War II, 90% emigrated in the following months and years, and the former Jewish district came to a final end came when the SNP bridge was built in the 1960s.

The Heydukova Street Synagogue is the last surviving synagogue in the city. Outside, it has monumental columns with seven pillars in the front. Inside, the synagogue combines an innovative reinforced concrete structure and contemporary Cubist details with historical elements. This remains a living synagogue, and there are plans for several memorial tablets devoted to victims of the Holocaust victims are planned for this building.

The Holocaust Memorial on Rybné Square, beneath the shadow of Saint Martin’s Cathedral, was erected in 1996 to commemorate 105,000 Slovak Holocaust victims and the ‘Neolog’ synagogue that once stood in this square. The memorial features a statue with a Star of David and a black silhouette of the destroyed synagogue.

The gothic entrance portal from the mediaeval synagogue was uncovered in the 1990s in the courtyard of a building on Panská Street No. 11. 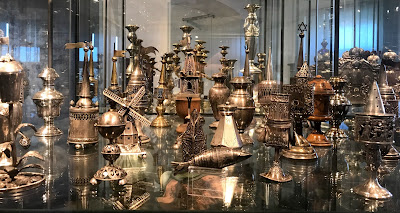 An exhibition in the Museum of Jewish Culture (Photograph: Patrick Comerford, 2019)

The Museum of Jewish Culture at Židovská 17 presents displays of Jewish spiritual and social life in Slovakia, with special displays devoted to the memory of the Holocaust.

Today, a modern memorial, containing the graves of Chatam Sofer and many of his associates and family, is underground below Bratislava Castle, on the left bank of the Danube.

The preservation of these graves has a curious history. The Jewish cemetery in Bratislava was confiscated by the regime in 1943 to build a roadway. Negotiations with the regime enabled the community to preserve the section of the cemetery including Sofer’s grave, enclosed in concrete, below the surface of the new road and tram tracks.

Following the declaration of independence by Slovakia in 1992, negotiations began to restore public access to the preserved graves. An international committee was formed in the mid-1990s to relocate the tram tracks and build a mausoleum.

Beside his tomb are another 22 tombs of other important members of the city’s Jewish community. The new mausoleum opened on 8 July 2002, and I was able to arrange a private visit on Tuesday afternoon [6 November 2019]. 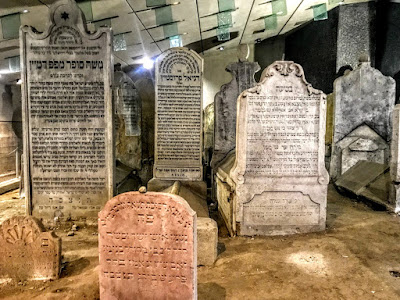 The tomb of Chatam Moser in the mausoleum that opened in 2002 (Photograph: Patrick Comerford, 2019)