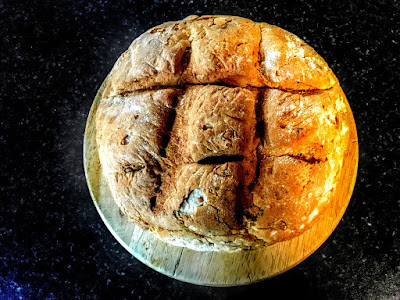 ‘Give us each day our daily bread’ (Luke 11: 3) … bread in the rectory kitchen in Askeaton (Photograph: Patrick Comerford, 2019)

9 ‘So I say to you, Ask, and it will be given to you; search, and you will find; knock, and the door will be opened for you. 10 For everyone who asks receives, and everyone who searches finds, and for everyone who knocks, the door will be opened. 11 Is there anyone among you who, if your child asks for a fish, will give a snake instead of a fish? 12 Or if the child asks for an egg, will give a scorpion? 13 If you then, who are evil, know how to give good gifts to your children, how much more will the heavenly Father give the Holy Spirit[f] to those who ask him!’

14 Now he was casting out a demon that was mute; when the demon had gone out, the one who had been mute spoke, and the crowds were amazed. 15 But some of them said, ‘He casts out demons by Beelzebul, the ruler of the demons.’ 16 Others, to test him, kept demanding from him a sign from heaven. 17 But he knew what they were thinking and said to them, ‘Every kingdom divided against itself becomes a desert, and house falls on house. 18 If Satan also is divided against himself, how will his kingdom stand? – for you say that I cast out the demons by Beelzebul. 19 Now if I cast out the demons by Beelzebul, by whom do your exorcists[g] cast them out? Therefore they will be your judges. 20 But if it is by the finger of God that I cast out the demons, then the kingdom of God has come to you. 21 When a strong man, fully armed, guards his castle, his property is safe. 22 But when one stronger than he attacks him and overpowers him, he takes away his armour in which he trusted and divides his plunder. 23 Whoever is not with me is against me, and whoever does not gather with me scatters.

29 When the crowds were increasing, he began to say, ‘This generation is an evil generation; it asks for a sign, but no sign will be given to it except the sign of Jonah. 30 For just as Jonah became a sign to the people of Nineveh, so the Son of Man will be to this generation. 31 The queen of the South will rise at the judgement with the people of this generation and condemn them, because she came from the ends of the earth to listen to the wisdom of Solomon, and see, something greater than Solomon is here! 32 The people of Nineveh will rise up at the judgement with this generation and condemn it, because they repented at the proclamation of Jonah, and see, something greater than Jonah is here!

37 While he was speaking, a Pharisee invited him to dine with him; so he went in and took his place at the table. 38 The Pharisee was amazed to see that he did not first wash before dinner. 39 Then the Lord said to him, ‘Now you Pharisees clean the outside of the cup and of the dish, but inside you are full of greed and wickedness. 40 You fools! Did not the one who made the outside make the inside also? 41 So give for alms those things that are within; and see, everything will be clean for you.

42 ‘But woe to you Pharisees! For you tithe mint and rue and herbs of all kinds, and neglect justice and the love of God; it is these you ought to have practised, without neglecting the others. 43 Woe to you Pharisees! For you love to have the seat of honour in the synagogues and to be greeted with respect in the market-places. 44 Woe to you! For you are like unmarked graves, and people walk over them without realizing it.’

45 One of the lawyers answered him, ‘Teacher, when you say these things, you insult us too.’ 46 And he said, ‘Woe also to you lawyers! For you load people with burdens hard to bear, and you yourselves do not lift a finger to ease them. 47 Woe to you! For you build the tombs of the prophets whom your ancestors killed. 48 So you are witnesses and approve of the deeds of your ancestors; for they killed them, and you build their tombs. 49 Therefore also the Wisdom of God said, “I will send them prophets and apostles, some of whom they will kill and persecute”, 50 so that this generation may be charged with the blood of all the prophets shed since the foundation of the world, 51 from the blood of Abel to the blood of Zechariah, who perished between the altar and the sanctuary. Yes, I tell you, it will be charged against this generation. 52 Woe to you lawyers! For you have taken away the key of knowledge; you did not enter yourselves, and you hindered those who were entering.’

A prayer today (International Mountain Day) from the Prayer Diary of the Anglican mission agency USPG, United Society Partners in the Gospel:

Let us give thanks to God for the gift of natural resources such as the mountainous regions of our world that play critical roles for food, water, ecosystems and recreation. 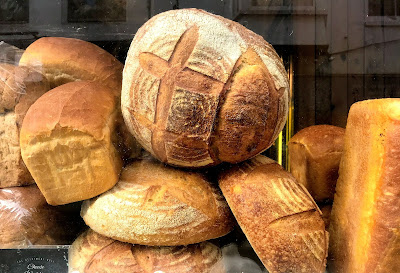