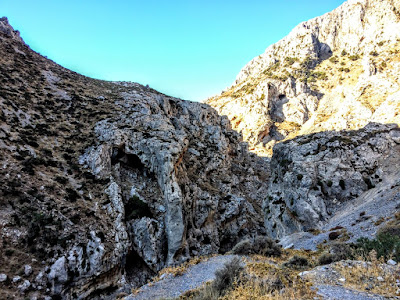 ‘Jesus, full of the Holy Spirit … was led by the Spirit in the wilderness’ (Luke 4: 1) … travelling through a gorge in Crete (Photograph: Patrick Comerford)

1 Jesus, full of the Holy Spirit, returned from the Jordan and was led by the Spirit in the wilderness, 2 where for forty days he was tempted by the devil. He ate nothing at all during those days, and when they were over, he was famished. 3 The devil said to him, ‘If you are the Son of God, command this stone to become a loaf of bread.’ 4 Jesus answered him, ‘It is written, “One does not live by bread alone”.’

5 Then the devil led him up and showed him in an instant all the kingdoms of the world. 6 And the devil said to him, ‘To you I will give their glory and all this authority; for it has been given over to me, and I give it to anyone I please. 7 If you, then, will worship me, it will all be yours.’ 8 Jesus answered him, ‘It is written,

“Worship the Lord your God,
and serve only him”.’

9 Then the devil took him to Jerusalem, and placed him on the pinnacle of the temple, saying to him, ‘If you are the Son of God, throw yourself down from here, 10 for it is written,

“He will command his angels concerning you,
to protect you”,
11 and
“On their hands they will bear you up,
so that you will not dash your foot against a stone”.’

12 Jesus answered him, ‘It is said, “Do not put the Lord your God to the test”.’ 13 When the devil had finished every test, he departed from him until an opportune time.

Let us repent for all persons who experience enslavement in different forms today, that they may find liberation.

Jesus answered him, ‘It is written, “One does not live by bread alone”.’(Luke 4: 4) … bread on a stall in Thessaloniki (Photograph: Patrick Comerford)