John Leslie, ‘the oldest bishop
in Christendom’, and
his eighteen-year-old wife 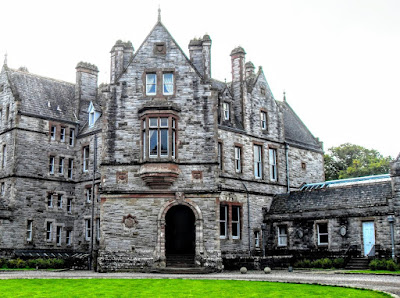 When Bishop John Leslie died on 8 September 1671, he was just a few weeks short of his 100th birthday and was reputed to be the oldest bishop in Christendom. He was also a pugnacious bishop, and was known as ‘the fighting bishop’ because of his active role, despite his years, in the wars that raged throughout Ireland in the 1630s, 1640s and 1650s.

Bishop Leslie must have been a very happy man though. When he died, his wife Catherine was half his age, and in their 33 years of marriage they had ten children in all. John Leslie may have thought he was at the end of his career when he came to County Donegal in June 1633 as Bishop of Raphoe. He was then almost 62, single, and was moving from Scotland where he had a difficult time as Bishop of the Isles, a far-flung diocese. But Ireland brought its rewards in church, politics and in marriage.

Leslie was born at Crichie in Aberdeenshire on 14 October 1571. He was educated at Aberdeen, but left Scotland in 1588 and studied in Padua, Leipzig, Madrid, Salamanca and San Sebastian. He continued to live on Continental Europe for decades, and in Spain he was acclaimed for his learning in Latin.

He was in his late 40s when he moved to England, and he was admitted to read in the Bodleian Library in Oxford in 1618. He was ordained deacon that year by John King, Bishop of London, and at the age of 50 was ordained priest in 1621. On the nomination of King James I, In 1624, he received the degree of Doctor of Divinity (DD) at Trinity College Cambridge in 1624 and was also made a Privy Councillor of Scotland and one of his royal chaplains. That year, Leslie also received his first church appointment, as Rector of Hartlebury in Worcestershire. But he remained there for only three months and returned to London as Rector of Saint Martin Vintry on Saint Patrick’s Day, 17 March 1625, ten days before the king died.

Leslie was now dabbling in politics and war, and he was with George Villiers, Duke of Buckingham, at the Siege of Isle de Ré in 1627 in support of the Huguenots fighting against the French crown. The siege was a disaster, but Leslie continued to enjoy royal favour, and he returned to Scotland at the age of 56 when King Charles I appointed him Bishop of the Isles in August 1628. In Scotland, neither episcopacy nor a far-flung diocese along the western coast had their attractions, with strong Presbyterian resistance to Charles I’s efforts to impose a brand of Anglicanism on the Church of Scotland. When Charles I was finally crowned in Edinburgh in June 1633, he rewarded Leslie’s loyalty with a new appointment as Bishop of Raphoe in Co Donegal, and he had Raphoe Castle built.

By then, Leslie was almost 62, but Ireland offered a fresh start, in life and in love. Leslie found many of the diocesan estates had been acquired illegally by lay people, and he used the force of law to recover some of these lands. He had no official residence, and so he built a new, fortified episcopal palace. In his disputes, he found a ready ally in John Bramhall, Bishop of Derry and later the Restoration Archbishop of Armagh. Then, in 1638, the bishop married Catherine Cunningham, daughter of Alexander Cunningham, Dean of Raphoe Cathedral. There was almost a gap of half a century in their ages – he was almost 67, she was only eighteen.

When the rebellion of 1641 broke out, Leslie went to battle for Charles I. Although he was now 70, he raised a company of soldiers, brought ammunition from Dublin to Derry, and relieved a besieged Sir Ralph Gore at Magherabeg, in north-west Donegal.

When most of his fellow bishops of the Church of Ireland abandoned their dioceses and moved to England or Scotland, Leslie remained in Raphoe and did not go to Scotland until 1642. After the execution of Charles I in 1649, he returned again to County Donegal and defended Raphoe against the Cromwellians. He was one of the last royalists to submit in 1653, and was the only Anglican bishop to remain in his diocese in Ireland during the Cromwellian era. During those years, he confirmed children in Dublin, and ordained priests and deacons.

At the Restoration in 1660, Leslie – by now an elderly but sprightly man of 88 – rode from Chester to London in just 24 hours to declare his loyalty to Charles II. He then returned to Ireland and resumed his role as Bishop of Raphoe. A year later, with Bramhall’s reorganisation of the Church of Ireland, Leslie’s loyalty was recognised once more and at almost the age of 90, he was appointed Bishop of Clogher in June 1661. On the recommendation of Charles II, the Irish Parliament voted to him a reward of £2,000. Leslie said he hoped ‘that whatever the house hath given to a prophet may receive a prophet’s reward.’

Leslie used the money to buy Glaslough estate in County Monaghan and renamed the house Castle Leslie. Despite his age, he remained Bishop of Clogher for another decade. When he died on 8 September 1671, he was buried at Saint Saviour’s, the church he had built on his estate.

Catherine and John Leslie seem to have been happily married, and they had ten children. Their eldest surviving son, John Leslie, became Dean of Dromore, while their sixth son, the theologian Charles Leslie (1650-1720), Chancellor of Connor Cathedral, was a leading non-juror, refusing to take the oath of loyalty to William III and following the Jacobite court into exile.

The descendants of this happy marriage continue to live at Castle Leslie in Glaslough – which is, appropriately, a popular wedding venue today. The Castle Leslie estate has recently launched a new gin in honour of Bishop John Leslie; named ‘The Fighting Bishop’, it is produced from beech leaves and botanicals hand-picked from trees planted by the bishop on the estate over 300 years ago.

This paper was first published as Chapter 15, John Leslie, ‘the oldest bishop in Christendom’, and his eighteen-year-old wife, in Marriage and the Irish: A miscellany, edited by Salvador Ryan (Wordwell: Dublin, 2019, 283 pp), pp 50-52.

Was it not another Duke of Buckingham, a friend of the family, who in 1911, sent a basket of grey squirrels to Castle Leslie from England as a wedding gift, and thus began a new alien plantation in Ireland?