Part of the celebrations
marking 350 years at
Drogheda Grammar School 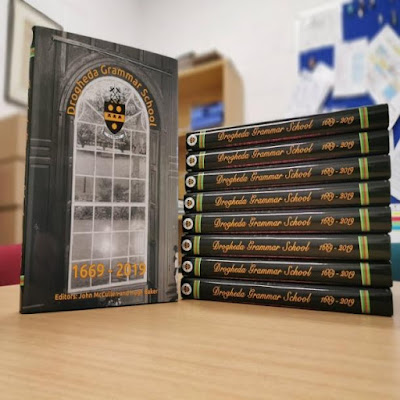 I have fond memories of Drogheda Grammar School from the1960s, when it was located at Laurence Street in Drogheda and I was a schoolboy in neighbouring Gormanston, Co Meath.

Now it is a pleasure, half a century later, to be part of the celebrations of Drogheda Grammar School of the 350th anniversary of the school’s foundation in 1669.

Drogheda Grammar School is one of the oldest secondary schools in Ireland and has been providing first class education to local, national and international students for almost 350 years.

Drogheda Grammar School was founded under a Royal Charter granted to Erasmus Smith in 1669 and is now enjoying its fourth century of continuous educational service to the community.

It was originally a boys’ boarding school, but has been a co-educational school for over 50 years.

Drogheda Grammar School Ltd is a company with charitable status called that was set up in the early 1950s when a group of local people – mostly Quakers – saved the school from threatened closure. They included Victor and Winifred Bewley, Bevan Lamb, Basil Jacob, Doris Johnson, and other members of the Allen, Bewley, Douglas, Haughton and Young families.

Although the school is not a Quaker school, it is run along the Quaker principle of ‘every individual is of value and has something to contribute.’

The school was located in Drogheda’s town centre, beside Saint Laurence’s Gate until 1976, when it moved to Eden View and an 18-acre campus at Mornington, outside Drogheda.

Today, there are 360 students at the school, where the campus includes a Regency house flanked by woodland, with modern classroom and dormitory buildings and extensive playing fields.

The reflection room in the new school building (2012) features a stained-glass window that was originally in the old school building in Laurence Street. The Bole Memorial window is named after Bobbie Bole, a student who died at the school in 1942, and was created by the famous Harry Clarke Stained Glass Studio in the 1940s.

The history of the school is celebrated in a new book, Drogheda Grammar School, 1669-2019, edited by the school principal Hugh Baker and local historian John McCullen.

Historians still debate whether the Duke of Wellington attended Drogheda Grammar. But I was invited to contribute Chapter 4 on his life and legacy: ‘Wellington: the Irish hero at Waterloo who introduced Catholic Emancipation’ (Chapter 4, pp 31-37).

Other chapters look at Henry Grattan, the history of the school over the past 3½ centuries, past pupils, including those who died in World War I, headmasters at the school since its foundation, student life, teachers’ reminiscences, the history of Eden View, and a moving chapter by local historian Brendan Matthews that includes a sad account of the demolition of the former school buildings on Laurence Street by developers in 1989.

The new book was launched just before Christmas at the school’s Carol Service in the Bevan Lamb Hall. The book can be bought through Drogheda Grammar School.

As for my chapter on the Duke of Wellington, more on this later HERE.