Strolling around Valencia
and its churches, finding
links with the Borgias 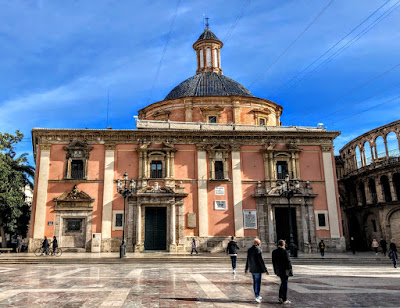 The interiors of Valencia Cathedral and churches such as Santos Juanes and San Nicolás made this week’s visit to Valencia an architectural and cultural delight. But there were many other churches that I briefly visited and that provided interesting glimpses into the history and life of the city.

The Real Basilica de Nuestra Señora de los Santos Inocentes Mártires y Descamparados is the long and full name for a church that seems to live in the shadow of Valencia Cathedral. In English, I imagine, it might be known as the Royal Basilica of Our Lady of the Holy Innocent Martyrs and Homeless.

This church was built on the ruins of the Roman forum and gravestones, funerary monuments and inscriptions from Roman times can be seen on the stones used in the building work in the 17th century.

The basilica, built in 1652-1667, takes its name from the statue of the Virgen de los Desamparados or the Forsaken, the patron saint of the city, known affectionately known as La Jorobadita or ‘the humpback’ because the statue tilts slightly forward.

The statue dates from the founding of the hospital of Santa Maria dels Ignocents in 1409 and its brotherhood five years later. The statue was moved to a chapel in the cathedral in 1489, but growing popular devotion created the need for a chapel or church of its own.

A plague epidemic killed about 18,000 people in Valencia in 1647, and many people turned to the Virgin in prayers for help and shelter. The foundation stone for the new basilica, designed by Diego Martínez was laid on 27 April 1652.

Inside, the basilica has the appearance of an oval-shaped church with a dome standing on eight pillars of red marble. The internal decorations, from 1763-1767, were designed by the architect Vicente Gascó Masot (1734-1802).

The frescoes in the dome were painted by Antonio Palomino in 1701. He also painted the vault in the Church of Santos Juanes in 1697 and designed the pictorial programme of the dome of the Church of San Nicolás, which was completed by Dionís Vidal.
Other frescoes are the work of the Valencian painter Francisco Llácer (1781-1852), and works of art in the church include a bust by Octavio Vicent of Pope Alexander VI, who was born Rodrigo de Borja in Valencia.

During the Spanish Civil War (1936-1939), the church was damaged in 1936, but its fabric and treasures, including the statue, were rescued and saved by the Republican mayor of the city, José Vano Coloma. The basilica was declared a national artistic historic monument in 1981. 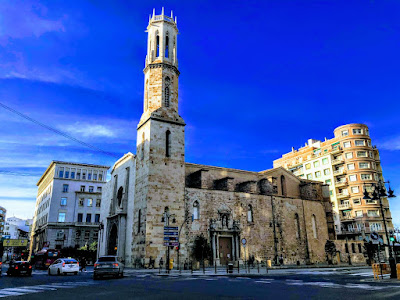 San Agustín Church or Saint Augustine Parish Church on Plaza de San Agustín dates from a convent built on this site for the Augustinian hermits in 1307. It was once one of the biggest monastic houses in Valencia, but only the church remains today.

The church was originally dedicated to Saint Catherine the Martyr and Saint Augustine. It was built in the Gothic style and has a single nave with side chapels between the buttresses and a choir. The five large pointed arch windows of the presbytery create a sensation of lightness.

French troops used the church as headquarters during the War of Independence in 1812.

During the Spanish Civil War, the church was destroyed in 1936. It was restored and remodelled in 1940 by the architect Javier Goerlich Lleó, and was renamed simply as Saint Augustine Church. The façade and the tower facing onto Guillem de Castro Street date from this restoration.

The most important treasure in the church is a Byzantine icon known as ‘Mare de Deu de Gracia’ (Our Lady of Grace). 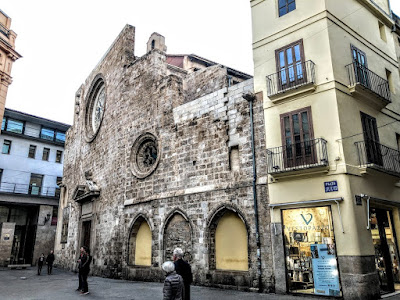 Santa Catalina Church stands in the heart of the former Jewish quarter of Valencia and dates from the Catholic conquest of the city from the Moors, when King Jaime I built the church on the site of a mosque. Behind the baroque façade, the church has an early Gothic interior. The church has one Gothic nave divided into eight sections, which gives the church its enormous width.

The church lost part of its Baroque decorations during the War of Independence.

Santa Catalina Church has a beautiful, baroque bell tower, which is said to be a reworking of the original minaret of the mosque that stood on this site. The baroque tower is a contrast to the more sober bell tower of the cathedral, known as El Miguelete. According to a popular local legend, the two towers are husband and wife. 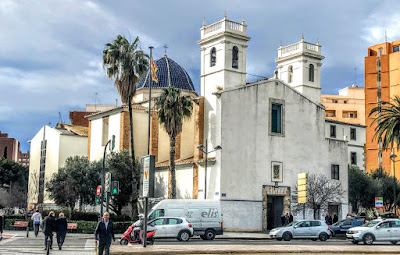 Close to the Ciutat de les Arts I de les Ciencies, which is straddled by the Puente de Monteolivete, the Church of Monteolivete, which gives its name to the bridge, is the surviving legacy of an old hermitage and dates from the 18th century.

The Church of Monteolivete was built in the neoclassical style in 1767-1771 for an old hermitage of priests who had come from Naples. The church is built in the shape of a Latin cross and has a single nave. The façade is flanked by twin towers with a square base.

Inside the church, the icon of Our Lady of Monteolivete stands over the main altar on a base from a small olive tree. The monks of the Congregation of Saint Vincent de Paul took over the hermitage in 1826, but were forced to leave in 1835 under the laws of confiscation.

The church became an independent parish in 1941. Although it has been heavily restored, it is among the best-preserved churches in Valencia. 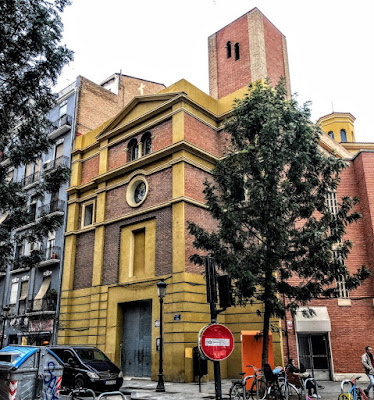 The Church of Saint Francesco Borja … a reminder of a saint among the Borgias (Photograph: Patrick Comerford, 2020)

The Church of Saint Francesco Borja is a modern church on the corner of Calle de Cuba and Calle del Litorato Azorín in Rusaffa, the district where I went strolling each evening. Despite its modern appearance, it is a reminder of the ancient connection between Valencia and the Borgia family. The Borgias moved to Valencia after it was conquered from the Moors by James I of Aragon.

Borgia is the Italian spelling of the Valencian family name Borja. Because of the lifestyle of Pope Alexander VI, the name Borgia is a byword for libertinism and nepotism. Family members included Pope Callixtus III (Alfonso de Borgia) and Pope Alexander VI (Rodrigo de Borja), who had several children with his mistresses, including Cesare Borgia, who was a major inspiration for The Prince by Machiavelli, and Lucrezia Borgia, who is the subject of allegations of incest, poisoning and murder.

Saint Francis Borgia (1510-1572), who gives his name to this church, was born Francesc de Borja or Francisco de Borja in Valencia. He was the 4th Duke of Gandía, a Spanish Jesuit, the third Superior General of the Society of Jesus and a grandee of Spain, and was canonised a saint by Pope Clement X in 1670.

His father, Juan Borgia, 3rd Duke of Gandía, was the son of Giovanni Borgia and the grandson of Pope Alexander VI (Rodrigo Borgia); his mother Juana was a daughter of Alonso de Aragón, Archbishop of Zaragoza, who, in turn, was an illegitimate son of King Ferdinand II of Aragon; his brother Tomás de Borja y Castro was Bishop of Málaga before becoming Archbishop of Zaragoza.

Francesco was very pious as a child and wished to become a monk. Instead, his family sent him to the court of the Holy Roman Emperor, Charles V, who was also King Charles I of Spain. He was known as a composer of church music, and it was said that before Palestrina, Borgia was one of the chief restorers of sacred music.

He married a Portuguese noblewoman, Leonor de Castro Mello y Meneses, in 1529, and they were the parents of eight children born between 1530 and 1539.

He brought the body of Isabella of Portugal, the mother of Philip II of Spain, mother, to her burial place in Granada in 1539. He was appointed Viceroy of Catalonia that year, although he was still only 29.

When his father died in 1543, Francis became the 4th Duke of Gandía. His diplomatic skills were questioned when he failed to arrange a marriage between Prince Philip and the Princess of failed, ending an attempt to bring the two countries together in a marital alliance. By then he was 33, and he retired to Valencia.

When his wife Eleanor died in 1546, Francis decided to join the newly formed Society of Jesus. He made provisions for his children, put his affairs in order, renounced his titles in favour of his eldest son, and he became a Jesuit priest.

When Francis returned from a journey to Peru, Pope Julius III planned to make him a cardinal. To prevent this, Borgia agreed with Saint Ignatius to leave secretly and go to the Basque Country, where could live a life of seclusion and prayer. But his Jesuit colleagues persuaded him to leave his seclusion and in 1554 he became the Jesuit commissary-general in Spain. There he founded a dozen colleges and was given responsibility for Jesuit missions in the East and West Indies.

He was elected the third Father General or Superior General of the Society of Jesus in 1565, and he has been described as the greatest General after Saint Ignatius. He founded the Collegium Romanum, which later became the Gregorian University, advised kings and popes, and closely supervised Jesuit affairs. Yet he led a humble life and was widely regarded in his own lifetime as a saint.

Francis Borgia died in Rome on 30 September 1572. He was beatified by Pope Urban VIII in 1624 and was canonised by Pope Clement X in 1670. His feast is celebrated on 10 October. 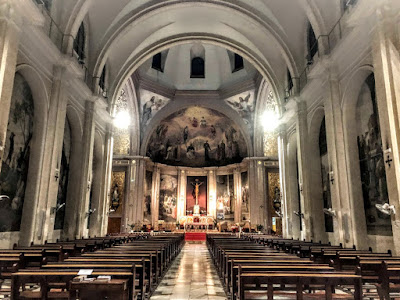 Inside the Church of Saint Francesco Borja (Photograph: Patrick Comerford, 2020)

The Palace of the Borgias, built by the first Duke of Gandia and son of Alexander VI, Pedro Luis Borgia, is now the headquarters for the Valencian Parliament. Since 2007, the Route of the Borgias is a cultural route linking sites associated with the Borja or Borgia family in Valencia. The route begins in Gandia, passes through various towns where the Borja family members left their mark, and ends in the city of Valencia.

Pope Callixtus III was the Rector of the Church of San Nicolás in Valencia before becoming Pope. He built the Chapel of San Pedro in Valencia Cathedral.

Before becoming pope, Pope Alexander VI commissioned Paolo da San Leocadio to paint frescoes for the dome of the apse in the cathedral, introducing Italian Renaissance painting in Spain. Pope Alexander VI also founded the University of Valencia by Papal Bull in 1500.

The cathedral also has a chapel dedicated to Saint Francis Borgia, with two Goya canvasses dating from the time he was Duke of Gandia. 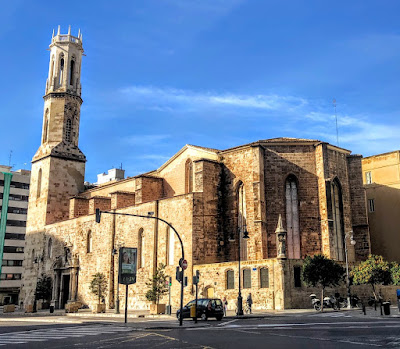