The statue of the poet and philosopher Solomon ibn Gabirol in a small square in Málaga … his liturgical poem ‘Azharot’ is associated with Shavuot, which begins this evening (Photograph: Patrick Comerford, 2019)

The Jewish holiday of Shavuot (שָׁבוּעוֹת), known as the Feast of Weeks or Pentecost in English, begins this evening (28 June 2020), at the start of the sixth day of the Hebrew month of Sivan.

Shavuot has a double significance – agricultural and spiritual. As an agricultural festival, it marks the wheat harvest (see Exodus 34: 22); spiritually, it celebrates the day God gave the Torah to the people at Mount Sinai.

This is one of the Three Pilgrimage Festivals of the Bible, along with Pesach (Passover) and Sukkot, the Festival of Booths.

The word Shavuot means ‘weeks’ and it marks the conclusion of the Counting of the Omer, beginning on the second day of Passover. Seven weeks of seven days totals 49 days – a week of weeks – so, Shavuot falls 50 days after Passover, hence Pentecost (Πεντηκοστή) in Biblical Greek. This year, Shavuot and Pentecost almost coincide, with the Day of Pentecost next Sunday (31 May 2020).

This counting of days and weeks is understood to reflect anticipation of God giving the Torah. On Passover, the people were freed from slavery in Egypt; on Shavuot, they were given the Torah and became a nation committed to serving God.

Shavuot is celebrated in Israel for one day, for two days by Conservative and Orthodox Jews in the Diaspora, and for one day only by Reform Jews.

The customs associated with Shavuot include reading of a liturgical poem during morning services; eating dairy products like milk, cheese and cheesecake; reading the Book of Ruth at morning services; decorating homes and synagogues with greenery; and all-night Torah study.

The 90-line liturgical poem Aqdamut (Aramaic אקדמות‎) praising God’s greatness, was written by Rabbi Meir of Worms, whose son was murdered during the First Crusade in 1096.

However, Sephardi Jews sing Azharot, a liturgical poem that sets out the 613 commandments in rhymed verse. The best known versions of this poem include those by two Spanish authors of the Middle Ages, Isaac ben Reuben Albargeloni and Solomon ibn Gabirol.

The Book of Ruth (מגילת רות, Megillat Ruth) is read on Shavuot because, it is said, King David, Ruth’s descendant, was born and died on Shavuot; Shavuot occurs at harvest time, the setting for the Book of Ruth; the numerical value of Ruth is 606, the number of commandments given at Sinai in addition to the seven Noahic Laws, for a total of 613; because the book describes Ruth’s conversion and her entry into the covenant given on Mount Sinai; and because loving-kindness is central to both the Torah and the Book of Ruth.

On her blog ‘Velveteen Rabbi,’ Rabbi Rachel Barenblat posted a poem for Shavuot two years ago:

Fruits: a poem for Shavuot

The fruits of my heart
poems of yearning and ache
text messages that say I love you
in a hundred different ways.

The fruits of my mind
sentences and paragraphs
eloquence and argument
new ideas casting bright sparks.

The fruits of my soul
the harmony that makes the chord
prayer with my eyes closed tight
inbreath of tearful wonder.

I have been in tight places
I’ve cried out – and You heard me!
Now I stand on the cusp
of flow and abundance.

I give You these first fruits
not because they’re ‘enough’
but because I want to draw near
to You, now and always. 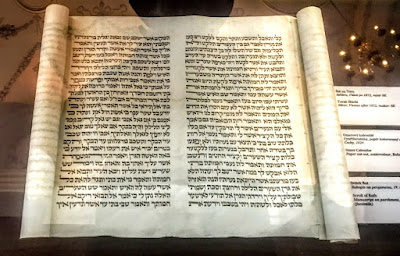 The Scroll of Ruth in a synagogue in Prague (Photograph: Patrick Comerford, 2019)