A Saturday afternoon stroll
through the architectural
legacy of Castleconnell

A pair of semi-detached Regency houses at Brooklands … part of the architectural elegance of Castleconnell (Photograph: Patrick Comerford, 2020)

As I strolled along the banks of the River Shannon in Castleconnell on Saturday afternoon, at both World’s End and Fairy Woods, I also enjoyed the opportunity to take another look at some of the early 19th century houses and buildings in the town that remain an important part of the architectural heritage of Co Limerick.

At the north end of Castleconnell, on the way towards World’s End, a pair of semi-detached houses at Brooklands, one with a green door, the other with a yellow door, illustrate the Regency and late Georgian elegance that remains part of the architectural legacy of Castleconnell. 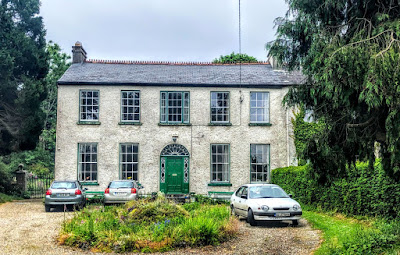 The house on the left is the most intact of the pair (Photograph: Patrick Comerford, 2020)

The house on the left is the most intact of the pair. These are semi-detached, five-bay, two-storey houses, built ca 1830. They have roughcast rendered walls and a rendered plinth course, timber sliding-sash windows and painted concrete sills.

Each house has timber sash windows, an ornate, cast-iron fanlight over the timber panelled doors and sidelights with cast-iron panels and timber risers that enhance their original character. There are rendered steps with cast-iron boot-scrapers at the front doors. 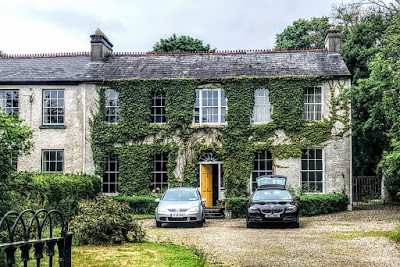 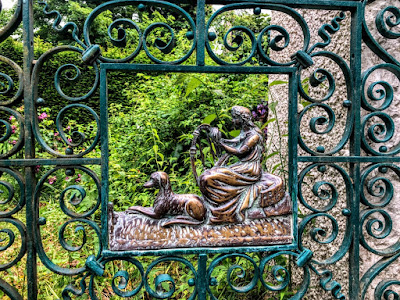 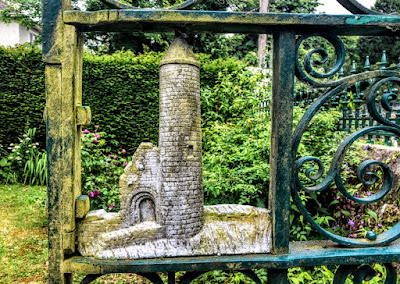 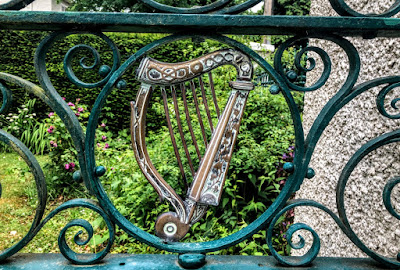 In addition, the house on the left has a pair of interesting gates, decorated with Celtic revival images, including Erin with her stringless Harp and an Irish wolfhound, a Celtic harp, and a round tower beside a ruined church. 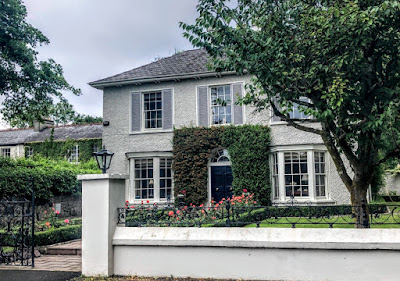 Glenbrook has overhanging eaves and a pair of bay windows (Photograph: Patrick Comerford, 2020)

Beside these two, Glenbrook is an attractive, well-proportioned house, also built ca 1830. Its distinctive features include the overhanging eaves that enhance the architectural value of the house.

This is a three-bay, two-storey house, with bay windows at the ground floor, and a hipped slate roof with rendered chimneystacks and overhanging eaves with timber brackets. The entrance has a spoked fanlight over double-leaf timber panelled doors, and brick steps. 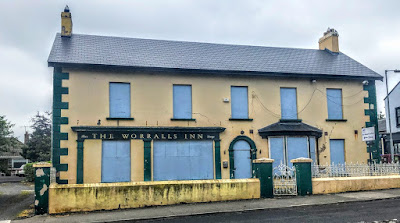 The Worrall’s Inn remains a beautiful building despite being boarded up (Photograph: Patrick Comerford, 2020)

On the Main Street, the Worrall’s Inn stands opposite Saint Joseph’s Church. This is an earlier building, dating from ca 1820.

This a five-bay, two-storey house is a former pub and family residence. Although it is now boarded-up, it retains many typical features of early 19th century urban architecture, including the ordered façade of balanced proportions, the regular rhythm of the windows and the decorative timber bargeboards.

The bay window, which once had one-over-one pane timber sliding sash windows, is now boarded up. But it is still particularly ornate, with its dentilated cornice and flanking, timber engaged columns.

The entrance and front door are also blocked up, but this is a round-headed opening with a render surround, Doric style pilasters and a hood-moulding and it once had a glazed overlight and double-leaf timber panelled doors. The shopfront comprising has Doric-style pilasters supporting the fascia and cornice. The square-headed display openings had timber mullions.

In front of the former pub, the boundary walls have decorative wrought-iron railings and a gate, although part of the railings are now missing. 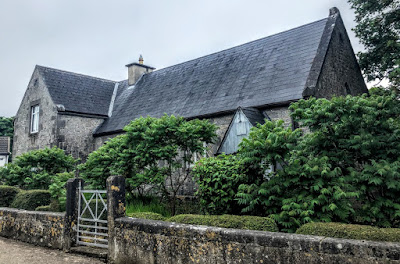 Across the street and behind the church a former Gothic-revival school has been divided and converted into two private houses, although one of these houses is now vacant and boarded up.

This former school was built to a standard simple design, but it is distinguished by its Gothic Revival features such as the lancet window, the timber front porch, the rendered chimney-stacks, the tooled limestone quoins, buttresses and a trefoil motif. The window surrounds are cut with a high degree of precision. A name plaque reads ‘Stradbally National School’ and a date plaque reads ‘1853.’ 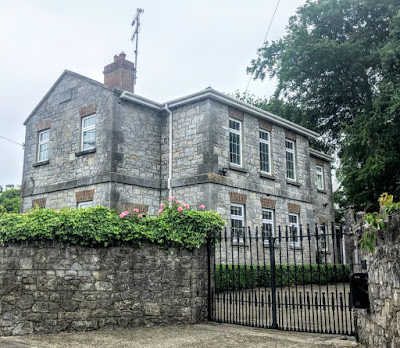 The former Irish Harp Centre stands on the site of a former church (Photograph: Patrick Comerford, 2020)

A second former school, the former is near the river at Ferry Park. For 14 years, from 2002 to 2016, this was the Irish Harp Centre, a residential harp college and music school directed by Dr Janet Harbison and Malcolm Gullis.

It was built as a six-bay, two-storey cruciform-plan school in 1867. It has gable-fronted breakfronts at the front and rear elevations, a timber portico, a hipped slate roof and red brick chimney-stacks.

The former school retains many of its original despite the changes of use over time. It was built on the site of the former Roman Catholic church, and is an attractive feature in the landscape of Castleconnell. 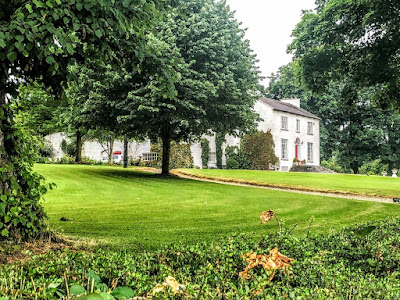 Shannon View was the residence of the local land steward (Photograph: Patrick Comerford, 2020)

Next door, overlooking the river, Shannon View was built in the early 19th century as the residence of the local land steward.

It is a three-bay, two-storey over basement house. There is an elliptical-headed carriage arch with limestone copings. 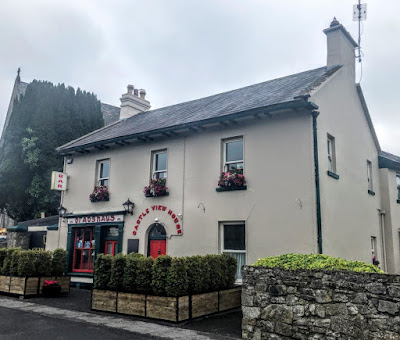 Castleview House is a well-proportioned middle-size house in the centre of Castleconnell. It still has its original form and fabric, with a simple shopfront.

This three-bay, two-storey house was built ca 1870, and has a late 19th-century shopfront, a pitched slate roof with overhanging eaves that have timber brackets. An impressive feature is the round-headed opening with a spoked fanlight and timber-panelled door.

The house takes its name from the ruined castle that gives its name to Castleconnell. The castle ruins sit at the top of a steep rocky plateau overlooking the river at the south-west edge of Castleconnell.

This was the site of fortified structures from 1174. At times it was held by the O’Briens of Thomond and the Bourkes of West Clanwilliam. The castle was blown up in 1691 after it fell to General Ginkel and his besieging Williamite, and remains of the south-west and north-west towers can still be seen. 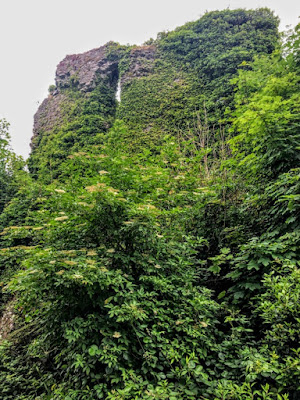 The ruins of the castle that gives Castleconnell its name (Photograph: Patrick Comerford, 2020)