Two priests in one diocese,
and they both claimed to be
chiefs of the O’Hanlon clan

I was writing this morning about some of the unusual titles and exotic genealogical claims of some of the priests and bishops in the Diocese of Limerick, Killaloe and Ardfert over the centuries.

But, perhaps, the most curious title claimed by any of the clergy in this diocese was the title of ‘The O’Hanlon,’ an ancient title for the head of a Gaelic Irish clan. It is even more intriguing that this title was claimed by two near-contemporaries, whose time in the diocese almost over-lapped, yet they seem to have no close ties of kinship with each other.

Hanlon entered Trinity College Dublin late in 1839 at the age of 23, and graduated BA in 1844. He later studied for ordination and was ordained deacon in 1846 by the Bishop of Killaloe for the Diocese of Ardfert, and priest in 1847.

He was first a curate in 1846-1848 in Murhir, 4.5 miles south of Tarbert, close to border of Co Kerry and Co Limerick, making him one of my predecessors. The main town in the parish today is Moyvane or Newtownsandes. He seems to have lived in Ballylongford, and today Murhir and Ballylongford are part of the Kilnaughtin Parish within the Rathkeale and Kilnaughtin Group of Parishes.

During his time in this parish, he was praised for his ‘unremitting’ and ‘constant’ work with local people suffering during the Famine and for his ‘genuine charity.’ He freely distributed milk, bread and medicine, working with orphans and the elderly, and it was said: ‘ Not a house in which fever is to be found (and they are the greater in number), but he visits in person.’

He seems to have been considering an appointment to Dingle parish during the vacancy in 1864 and was visiting the parish when his wife suffered an epileptic attack while bathing in Dingle Harbour with their young children. She died soon after, and she was buried in Saint James’s churchyard in Dingle.

Hanlon stayed on in Mounshannon for another few years, and he received the degrees LL.B. and LL.D. from Trinity College Dublin in 1865. In a speech in 1867, he defended his work with the Irish Society and the Irish Church Missions, but he was at pains to deny he had any antagonism towards Roman Catholicism.

He married a second time in 1871; his second wife Rebecca Parker was a daughter of James Parker of Ballhalmet House, Tallow, Co Waterford. A year later, he moved from Mountshannon to Tallow Parish in west Waterford, and remained there until he became deputy secretary of the Irish Society in 1879. He was feted at a garden party in Dugort organised by the Achill Mission in 1889.

He died at Ballyhalmet House, Tallow, Co Waterford, at the age of 84 on 10 December 1898, and was buried inside the ruins of Kilwatermoy Church. 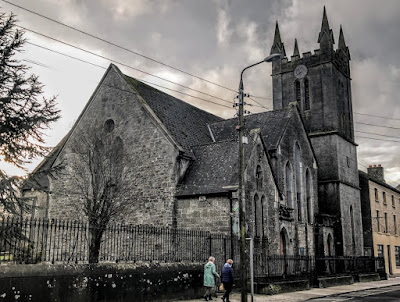 His younger, near contemporary, the Revd William Hanlon (1849-1916), also worked in ministry in these dioceses and also claimed the title of The O’Hanlon. He was the only son of Dr Michael William Hanlon (1810-1890) of Portarlington, and a grandson of Captain William Hanlon of Mountmellick.

In 1877, Hanlon married Elizabeth Letitia Elrington, daughter of the Vicar of Swords, and granddaughter of the Revd PW Drew, Rector of Youghal, and he moved back from Ardfert diocese to the Diocese of Cork and Cloyne in 1879 when he became Rector of Innishannon, Co Cork (1879-1916). His father died at Hanlon’s rectory in Co Cork on 6 July 1890.

In 1907, Hanlon assumed the title of ‘The O’Hanlon’ by deed registered in the Irish Court of Chancery. Along with the title of ‘The O’Hanlon,’ he also claimed to be chief of the Sept of O’Hanlon and Hereditary Standard Bearer of the King in Ulster. In the pedigree he compiled in support of his claims, Hanlon said his lineal ancestor had given Saint Patrick the site in Armagh for his first cathedral.

Hanlon claimed this ancestry down through 1244, when Henry III invoked the help of the O’Hanlons and other Ulster clan chieftains against the Scots. From there, Hanlon claimed descent from Patrick O’Hanlon, lived in Co Louth, son of Phelim O’Hanlon, and who was named as an outlaw in 1660. Patrick O’Hanlon’s son Shane settled in Portarlington at the end of the 17th century, and became a member of the Church of Ireland. His son Michael held land in the Portarlington area, and his only son was said to be Captain William Hanlon, the father of Dr Michael Hanlon.

Redmond O’Hanlon was said to have escaped by swimming across Carlingford Lough (Photograph: Patrick Comerford)

This all sounds fantastic. Except, for the minor detail that the last person before either of these two 19th century priests to have been accepted generally as the head of the family was the rapparee Redmond O’Hanlon, also known as ‘the Count.’

Redmond O’Hanlon was probably born in Poyntzpass, Co Armagh, ca 1640, but local lore says he was born at the foot of Slieve Gullion, a legend that helped to link him the mythical hero Cu Chulainn.

Redmond’s father, Loughlin O’Hanlon, was the heir to the chiefdom of the O’Hanlon clan. Eochaidh O’Hanlon had ruled all the land from Newry to Armagh in 1599, but his son sided with Sir Cahir O’Dochertaigh in a doomed rebellion. Eochaidh Og was exiled to Sweden, while most of the O’Hanlon lands were confiscated and given to Scottish and English planters. The O’Hanlons lost their castle at Tandragee in 1611 when it was given to Oliver St John.

Some of their land was returned to the O’Hanlon family and Redmond O’Hanlon was educated at ‘an English school.’ However, it is said, he fled to France after the Irish Confederation was defeated in 1652 and joined the French army.

After the Caroline Restoration, Redmond O’Hanlon returned to Ireland and installed himself as clan chief over the old O’Hanlon territories, styling himself ‘the Count.’ He was declared an outlaw in 1674 and became a rapparee around Newry and Carlingford Lough, and was described as being ‘pre-eminent among all the Tories in Ulster.’

In one incident in 1679, Henry St John and the Revd Lawrence Power of Tandragee were attacked by a group of bandits, and St John was shot dead. O’Hanlon was blamed for the attack, and a reward of £200 was offered for his apprehension.

Art McCall O’Hanlon, Redmond’s foster brother, shot Redmond O’Hanlon in an exchange on the night of 25 April 1681 at a camp in the hills above Eight Mile Bridge in Co Down. By the time soldiers arrived to retrieve his body, Willie O’Shiels had severed Redmond’s head and fled. His head was put on display at Downpatrick prison.

After Redmond O’Hanlon’s death, other members of the O’Hanlon family and their circle were hunted down as ‘Tories,’ and his surviving family fled to Co Donegal. Redmond O’Hanlon was originally buried at Ballynabeck, near Tandragee, but local stories say his son, also Redmond O’Hanlon, exhumed his body, and reburied him in the Church of Ireland churchyard at Conwal Parish in Letterkenny … which is a long way from Portarlington and Drumtarifffe, and a long way from Miltown Malbay and Moyvane.

As for Tandragee Castle, it was rebuilt by the Montagu family, Dukes of Manchester, in 1836, and remained in their family until 1939. Today, it is a popular tourist attraction known as ‘Tayto Castle.’ 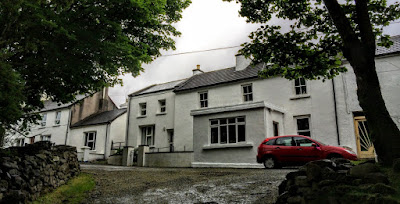