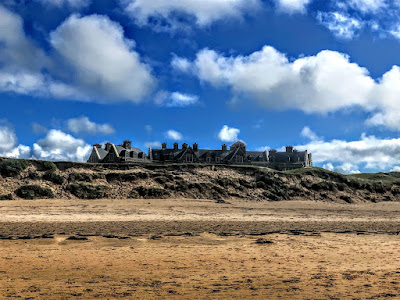 The Trump Hotel at Doonbeg … a carbuncle on the dunes or a haunting from Hogwarts? (Photograph: Patrick Comerford, 2020)

I know it is my prejudice that allows me to think that the Trump Hotel looms like a series of carbuncles above the sand dunes in Doonbeg. Others are much kinder, and they compare the stark, formidable buildings to a Scottish baronial-style castle or even to a set for Hogwarts.

But if the hotel looks like a remote or threatening castle in Scotland, this is accidental and bears no connections with Trump’s Scottish ancestry on his mother’s side of the family. Trump bought this place in 2014 for £15 million. But it had been part of the Co Clare landscape for at least 12 years before as the Lodge at Doonbeg.

Three of us visited Doonbeg on Saturday afternoon, after taking the ferry across the Shannon estuary from Tarbert to Killimer. It was a blustery afternoon, and we decided to go for a walk on the long sandy beach at Doonbeg rather than walking around the Marina in Kilrush.

During Trump’s visit to Ireland last year, it seemed the people of Doonbeg were proud of their links with the megalomaniac 45th president of the US. But today there are no signposts leading to the hotel and golf course, and it might be possible to miss altogether but for the fact that its outline can be seen in the distance, off the road out of Doonbeg to Ennistymon. 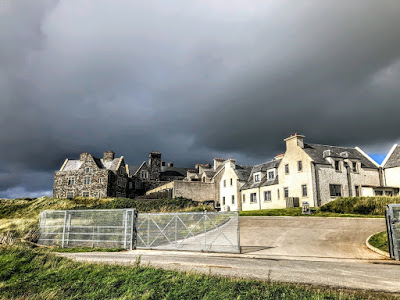 The signs at the gate at the Trump Hotel warn about Covid-19 and tell visitors to wear face-masks (Photograph: Patrick Comerford, 2020)

A narrow, one-track road leads down to the site and to the beach, and when we arrived at the car park in front of the hotel that serves the long, sandy beach, it seemed an irony that the only visible sign inside the sturdy forbidding gates was one listing precautions in this time of the Covid-19 pandemic, including a reminder to visitors to wear a facemask.

The links-type course north of Doonbeg was designed by Greg Norman and opened in 2002. Trump bought the lodge and golf club in 2014 for a reported €15 million, including a 5-star hotel with 218 hotel suites, a spa, reception rooms, several restaurants and some cottages.

But a report filed by the receivers – David Hughes and Luke Charleton of accounting firm Ernst & Young – shows that the proceeds from the sale of the golf resort amounted to slightly more than €8.7 million. The sale to Trump did not include a number of luxury suites sold to investors during the boom and leased back to the hotel. They bought those suites as investments, expecting to generate annual rental income and capital appreciation. Some 47 suites had been sold to investors at prices ranging between €1.2 million and €1.8 million.

During the 2016 presidential campaign, Trump claimed told the rally that he bought the complex during an economic downturn in Ireland and that it was a good investment.

It sounded like a carpet-bagger’s boast, but once again fact-checking shows this to be another Trump lie: the Irish economy had come out of recession by 2014. After the bailout exit, the Irish economy had started to recover, recording growth of 4.8% in 2014, national debt fell to 109% of GDP and the budget deficit fell to 3.1% in the fourth quarter of 2014. During 2015, unemployment fell from 10.1% to 8.8%, while the economy grew by an estimated 6.7%.

By November 2015, exchequer receipts were €3 billion ahead of target and that the government's tax revenues had risen by 10.5% throughout 2015.

They are figures that Trump has failed to match in the US during his four years in office.

Trump asked that campaign rally at Kiawah Island in South Carolina: ‘So Doonbeg, you know about Doonbeg?’

His questions drew a yelp from the crowd: ‘Yeah!’

‘We spent a lot of money on making it just perfecto and now it’s doing great,’ he told them. ‘But I don’t care about that stuff anymore. It is like small potatoes, right.’

The reference to ‘small potatoes’ was possibly an intended racist reference to the Irish potato famine that ranks alongside his reference to Covid-19 as ‘Kung Flu’ and the ‘China Flu.’

To rub salt into the wound, he added: ‘But I don’t care about it. I care about making America great again. That’s what I care about.’ 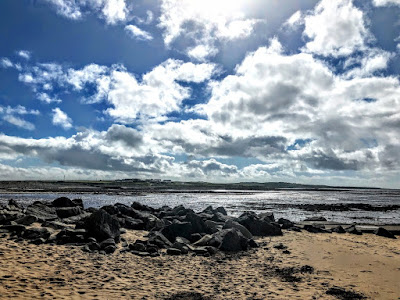 It is hard to fathom that Trump does not care about the landscape and the beauty around Doonbeg (Photograph: Patrick Comerford, 2020)

It is hard not to care about the landscape and the beauty around Doonbeg.

But if Trump does not care ‘about that stuff’ any more, it makes me wonder why he bothered to stop off there during his visit to Ireland last year. Even further beyond belief is that the business has applied for permits to build a 2.8 km sea wall to protect the property, citing ‘global warming and its effects’ – although Trump himself denies the existence of global warming.

The plan has drawn strong opposition because of concerns that it would adversely affect the Special Area of Conservation status of the site. The application was withdrawn in December 2016. A year later, in December 2017, permission was granted for two smaller barriers, of 630 and 260 metres. But that permission was appealed too, along with requests to build 53 holiday cottages, a leisure centre, and a restaurant.

In the same speech, Trump complained about the US drug company Pfizer and other firms moving to Ireland because their US taxes were ‘too high.’ But he saw no moral contradiction in using the resort in Doonbeg to roll over his own cash and to benefit from Irish tax incentives.

Admittedly, it is not possible to assert this with confidence as long as Trump refuses to disclose his tax returns, but – given his recent use of troops to clear people off the streets of Washington so he could have an egregious photo-opportunity with a Bible outside a church he never attends – ‘moral’ and ‘conscience’ are two words that do not come to mind immediately when I think about Trump.

Trump pledged to invest up to €45 million in Doonbeg and create hundreds of jobs. He said he would transform Doonbeg into a ‘truly iconic’ golf destination. But, while he returned to inspect his investment in June 2019, it looked lonely and forlorn on Saturday, with just a few golfers on the course and no indication that the restaurant had reopened or that the hotel was taking bookings.

Instead, the greatest investment in Doonbeg has been made by Irish people who were spending their money there on Saturday afternoon. Doonbeg has a large number of highly-rated restaurants, and all we were booked out by the time we started looking for a table for three when they opened at 6 p.m.

We returned through Kilrush to catch the evening ferry at Killimer. 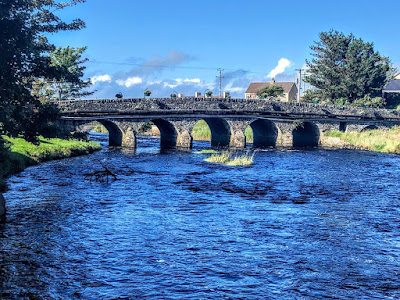 The seven-arched stone bridge that crosses the Doonbeg River and divides the village (Photograph: Patrick Comerford, 2020)