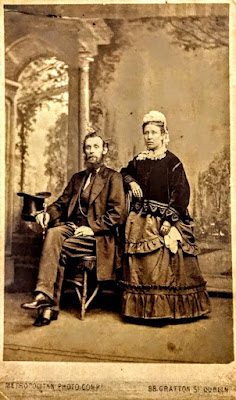 Many years ago, I received some photographs that had once been in my grandmother’s house in Terenure. They are obviously family photographs, taken at weddings, graduations, on holidays, or during visits by cousins and other family members from England or the US.

They might provide interesting glimpses of family life in an ordinary middle class family in suburban south Dublin for many decades up to the 1940s. They might … but for the fact that no-one wrote on the backs of the photographs to indicate who was who.

An aunt who lived in this house until the 1990s had once provided me with some photographs of my grandfather, Stephen Edward Comerford (1867-1921) and one photograph of my great-grandfather, James Comerford (1817-1902). So, I imagine many of these photographs had moved and been added to over the decades as the Comerford family moved from Ranelagh to Rathmines and Terenure.

Unable to identify the people in the photographs, I put many of them to one side for a long time. But in recent weeks one or two clues have allowed me to confidently date one of these photographs and identify the two people it portrays as my great-grandfather, James Comerford, and his wife Anne Doyle.

The photograph is in the style of a carte de visite, a popular form of portraits that were first produced in 1859, were at their most popular phase of production in 1860-1880, and then began to fade in popularity in 1880-1889.

The fashion for these inexpensive portraits reached its peak in Dublin the 1860s, and this is illustrated by the large number of photographers’ studios on three of the main streets of the capital: Sackville Street (now O’Connell Street), Westmoreland Street and Grafton Street. At one time, there were over 60 studios on these streets so that it became a strip known as ‘The photographic mile.’

So, I knew this photograph was, most probably, taken in the 1860s.

The second clue to dating this photograph is the card on which it is mounted. The card is labelled ‘Metropolitan Photo Compy 88 Grafton Street.’ The London Metropolitan Photographic Company was at 22 Westmoreland Street and 88 Grafton Street, Dublin, from 1867 to 1869, and then at 22 Westmoreland Street alone from 1872 to 1878.

This means the photograph was taken between 1867 and 1869, and this is further confirmed by the style of the photograph: square corners dominated these cards until 1870, when rounded corners, which were much less susceptible to damage, were introduced.

James Comerford was a Victorian stucco artist and architect, and with William Burnett he designed The Irish House on the corner of Winetavern Street and Wood Quay, Dublin.

He was born near Newtownbarry (now Bunclody), Co Wexford, in 1816 or 1817, the youngest son of James Comerford (1775-1825) of Ballyminane, Newtownbarry (ca 1775-1825) and a cousin of Bishop Michael Comerford (1831-1895), the 19th century Carlow historian. He first worked alongside his brothers Richard and Robert Comerford in Co Wexford with Richard Pierce and AWN Pugin, in Newtownbarry, Enniscorthy and Wexford Town.

In his later years, he took an interest in the family history and the links between the Comerford and Comberford families, visiting Comberford, Tamworth, Lichfield and Wednesbury – an interest that has been passed on to me. He died at 11 Upper Beechwood Avenue on 14 December 1902, at the age of 85. 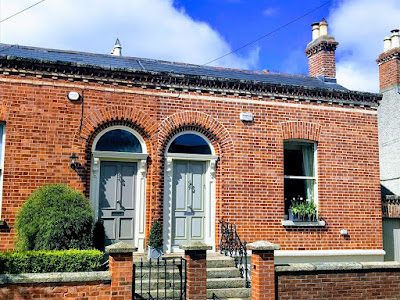 This photograph of James Comerford was taken some time between 1867 and 1869, while he was living at 7 Redmond’s Hill, a five-minute walk from Grafton Street, and in his early 50s. His son, Stephen Comerford, my grandfather, was born in 1867, and James Comerford’s career reached its pinnacle with the building of The Irish House on the corner of Wood Quay and Winetavern Street, Dublin in 1870.

Later, he would play a key role in the trade union movement, and work for the Board of Works, becoming a civil servant. So, I might speculate, this photograph was taken as James was reaching the pinnacle of his career, and his growing family offered him greater comfort. It is a portrait of a couple who are now confident of their place in the artistic and artisan society of Victorian Dublin.

Later, when my grandfather, Stephen Edward Comerford, was young and successful, he had his portrait taken in a way that presented him as a young Victorian man with confidence looking forward to the future. In the fashion of the time, this photograph was modelled on the formal portrait of John Ruskin (1819-1900) by Sir John Everett Millais (1829-1896). 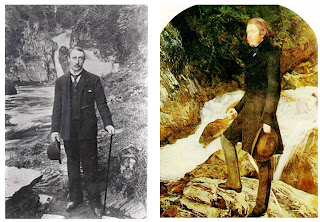 Stephen Edward Comerford (left) like a cut-out figure at a waterfall, and John Ruskin (right) in the well-known portrait by John Everett Millais (Photomontage: Patrick Comerford)

The carte de visite (CDV) style of photograph portraying my great-grandparents first appeared in 1859 and was most popular in the 1860s and 1870s. It changed consumer photography as much as the introduction of any other type of photograph. The image had a more natural appearance than the black-base of the tintype, and, because the materials were cheaper and easier to work with, the prices of photographs continued to fall.

The process was the first to use a glass negative. Previous photographs were unique, one-of-a-kind pictures. But now, the consumer could buy several copies of a picture, and share them with friends and relatives. Assembling a collection of family photographs became a popular tradition, and photograph albums began appearing in the early 1860s.

The image was developed on a very thin sheet of paper, and then was glued to stiff card stock. A CDV had a specific size: 2 3/8" x 4 1/4", although the size may vary up to 1/4", especially when the photographer cut his own card stock. But they were close in size, and album slots had a standard size.

Several features make dating the majority of cartes de visite relatively easy, within a few years. These include the card thickness, card corners, the image size on card, card borders, studio props and backgrounds, card corners and the names and addresses of the studios.

The carte-de-visite was also a style from 1860 of Thomas Whittaker’s Dublin Metropolitan Photographic Company, working in Dublin at 140 Saint Stephen’s Green West and an address on Grafton Street and in John Street, Kilkenny, from 1869 until he died in 1872. A few weeks after he died, his widow Mary Jane Hallen Whittaker advertised in the Kilkenny Journal that she would continue the business in John Street, Kilkenny.

The business at 22 Westmoreland Street, Dublin, was first associated with JH Monney in 1865, and was continued first by Simonton and Millard in 1877, and then by the Lauder family from 1879 to 1881, including Edmund Stanley Lauder who died in 1895, and later JE and Stanley Lauder until the late 1950s.

An advertisement by Lauder in 1878 claims, ‘Lauder have made most important alterations and improvements in their principal galleries, by means of which photographs are now produced in half the usual time, thereby rendering them more natural, pleasing and successful, and have spared no expense in providing the best lenses and apparatus and a great variety of new and beautiful scenery accessories.’

The Lauder studio in Dublin began at Capel Street in 1853. Edmund Stanley Lauder, the first owner of the studio, died in 1895. The business was later run by a number of members of the Lauder family.

Edmund Lauder’s son, James Stack Lauder (1853-1923), or James Lafayette, founded the Lafayette Studio in 1880. He became the first Irish photographer to be granted the royal warrant, earning this after photographing Queen Victoria in 1887, her Golden Jubilee year.

The Lafayette business was so successful that by the end of the 19th century there were branches in Glasgow, Manchester, London and Belfast. James Lafayette moved to London and became the most commercially successful portrait photographer of the day.

He died in 1923, and the company slowly declined, so that by 1952 only the Dublin office was left. It was sold off and most of the negatives were destroyed. In 2009 Lafayette Photography re-opened in Cambridge in 2009.

Other Grafton Street studios included those of Edgar Adolphe, a French painter who set up a photography studio in Dublin in the 1850s. His ‘Photographic Artist Gallery’ was at 75 Grafton Street (ca 1859-1873) and 9 Westmoreland Street (1874-1881). During his colourful life, he was jailed for libel in England and was pursuit by an alleged previous wife after he married in Dublin.

Louis Werner, a portrait painter from Alsace, settled in Dublin, and with his wife, Augustine, ran a photographic studio at 15 Leinster Street from 1864 to 1885. Their son, Alfred Werner, took over the business in 1886, and later ran the business from 39 Grafton Street.

Later, in the early 20th century, Harry Cowan owned a number of studios in Dublin, including the Franco-British Portrait Company, Grafton Studios, Camden Street Studio, Sackville Portrait Studio, and the Earl Portrait Studio. His brother, Jack, operated the ‘While-U-Wait’ booth on the promenade in Bray during the summer months.

As for 88 Grafton Street, it was just a few doors away from No 91, where John and William Switzer had opened their shop in Victorian Dublin. As Switzers expanded, No 88 was incorporated into their premises, and it is now part of the Brown Thomas premises in Dublin. 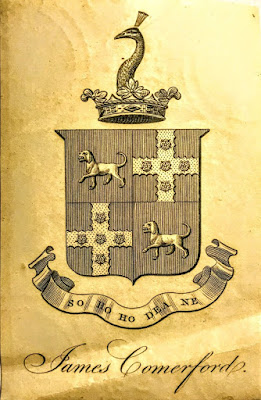