Beth El in Bunclody
may be the smallest
synagogue in Europe 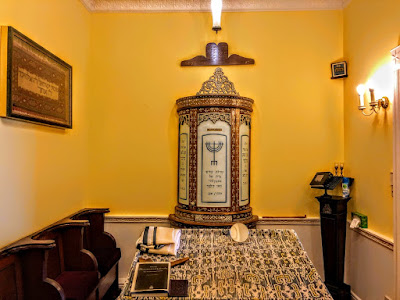 Inside the Beth El synagogue arranged and decorated by Joseph Baruch Silver in his home near Bunclody, Co Wexford (Photograph: Patrick Comerford, 2020)

Ireland’s most unusual – and what may be Europe’s smallest – functioning synagogue must be the shul in Co Wexford that has been arranged and decorated by Joseph Baruch Silver in Rainsford Lodge, his home at Ballinastraw, about 3 or 4 km outside Bunclody, on the road to Clonegal.

On the second leg of this year’s late summer ‘Road Trip’ through Ireland, two of us stopped last week on the way from Kilkenny to Wexford to visit some former Comerford family homes in Bunclody.

I had heard before about the private synagogue in Rainsford Lodge, but had never known how to arrange a visit. Last week, Joey Silver generously arranged for two of us to visit this synagogue in his house, close to the Newtownbarry estate of the Hall-Dare family. 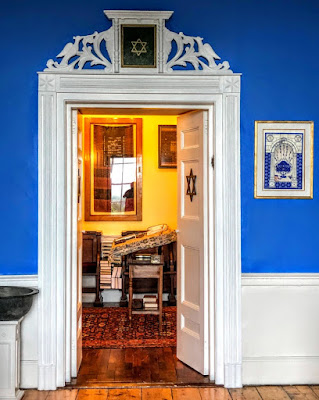 The synagogue was first suggested after the blessing of a new Sunday School room in Bunclody (Photograph: Patrick Comerford, 2020)

Rainsford Lodge was built as a ‘hunting lodge’ on land acquired by Michael Rainsford from the Baltimore estate in Co Wexford in 1749. The first house on this site may have been built later in the 18th century, but the present house – a five-bay two-storey over part-raised basement – was built in 1834-1837 for Lieutenant William Ryland Rainsford (1776-1864).

Samuel Lewis described the house in 1837 as a ‘recently erected mansion,’ but it probably retains portions of the earlier house. The deliberate alignment of the house takes full advantage of the scenic vistas of the rolling grounds, with Mount Leinster and the Blackstairs Mountains providing a picturesque backdrop.

William Rainsford’s son, the Revd Marcus Ryland Rainsford (1821-1897), who was born at Rainsford Lodge, was Chaplain of the Molyneaux Chapel in Dublin, Rector of Armagh (1854-1866) and minister of the fashionable Belgrave Chapel, London (1866-1897). Three of his sons were Anglican priests, including Canon William Stephen (1850-1933), a friend of Roosevelt and Churchill, a canon of the Cathedral of Saint John the Divine, New York (1882-1906), and Rector of Saint George’s, Stuyvesant Square, New York. 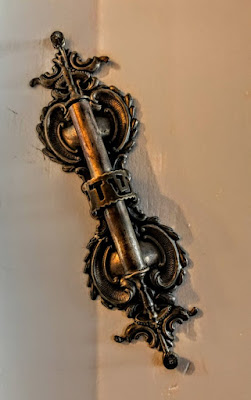 A mezuzah at the door into Beth El (Photograph: Patrick Comerford, 2020)

Rainsford Lodge was later owned by the Levingstone family and then the Booth family. Brigadier John Roberts Booth (1901-1971) was a son of James Erskine Wise Booth (1862-1931) and Hilda Mary Hall-Dare (1871-1953) of Newtownbarry House, Bunclody. Through his father, Booth was related to both Robert Barton, a signatory of the Anglo-Irish Treaty (1921), and President Erskine Childers.

Booth was an officer in the Indian Army and fought in the North-West Frontier (1931) and in World War II (1939-1945). He was wounded three times, was mentioned in despatches twice and was DSO (1945) and bar (1945). He retired in 1948 and returned to Bunclody to live at Rainsford Lodge. His sister, Evelyn Mary Booth (1897-1988), has been described as ‘one of Ireland’s most loved and respected botanists.’ She designed the gardens at Lucy’s Wood in Bunclody, and was the author of The Flora of County Carlow.

Rainsford Lodge was also associated with the Guinness and O’Mahony families before it was bought in 1989 by Joey Silver, the Toronto-born collector.

He recalls how shortly after moving to Bunclody, the Revd Nigel Waugh, then the Rector of Bunclody, invited him to give a blessing on behalf of ‘the local Jewish Community’ at the rededication of the Sunday School Hall at Saint Mary’s Church. 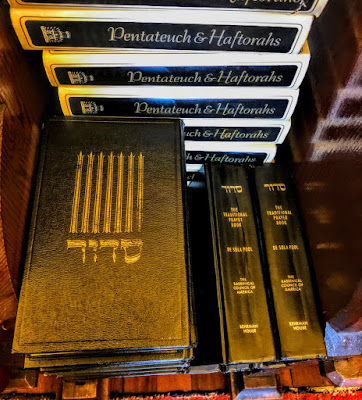 An Orthodox siddur or prayer book is used in the synagogue (Photograph: Patrick Comerford, 2020)

A local journalist interviewed him and later wrote that he was planning to build a synagogue at Rainsford Lodge. ‘All of a sudden, I received literally over 140 envelopes from non-Jews who wanted to donate to my synagogue construction!’

He was surprised by the donations from £5 to £50, amounting to over £1,300. In their generosity, local people ‘wanted to welcome a Jew to Ireland and to help me have a place to worship in my faith.’

But, at the time, he had no such plans. The then Chief Rabbi Ephraim Mirvis advised him to call all the donors, thank them, and suggest giving the funds to an ecumenical charity. ‘Everyone agreed, except an elderly Quaker gentleman from Wexford town, who wanted his funds used in the synagogue.’

And so, work began on creating Beth El at Rainsford Lodge, the only synagogue in Co Wexford. 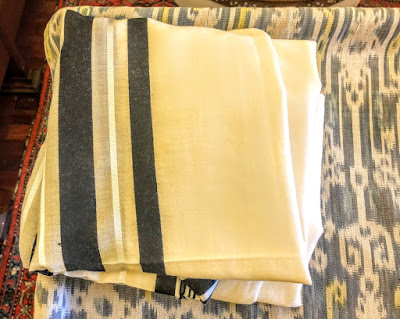 It was an ecumenical start for a project that reminded him of a story from his father’s village of Stopnica in Poland. There was a bad Spring flood in 1798, and the main synagogue got damaged. The local parish priest gave the Jewish community funds to restore it as a loan from the parish poor fund. A month later, the priest and the parish voted to turn the loan into a grant.

The Aron haKodesh or Ark for the Torah scroll and the Sefer Torah have been in place in Beth El since 2009. The Aron haKodesh is from Damascus, Syria, was bought in Jerusalem, shipped to Ireland, repaired and modified from a display case in Bunclody to become an ark.

The panels were painted by the artist Ilan Baruch from Israel, when he and his family stayed for 10 weeks on a painting visit and holiday.

The pews are from the Adelaide Road synagogue of the old Dublin Hebrew Congregation, which closed in 1999. They were made in the early 1890s as a gift to the synagogue when it opened in 1892 by Quaker carpenters, who also made the Bima and Aron haKodesh in Adelaide Road.

He reminds me of how Quakers also helped to build and furnish the Sephardi Bevis Marks Synagogue in London. Joseph Avis, a Quaker, built Bevis Marks in 1699-1701 at a cost of £2,650 but, according to legend, declined to collect his full fee, on the ground that it was wrong to profit from building a house of God. 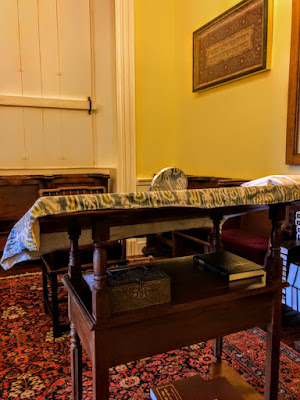 The Bima or table for reading the Torah scroll was made by the late Joe Moran (Photograph: Patrick Comerford, 2020)

The carved decoration over the entrance door of two birds, with the gold Star of David on a dark green background, come from an Aron haKodesh that was once stolen from a synagogue in the Jewish Quarter in Jerusalem in 1948.

On each of the pair of doors under the ‘Ark Crown’ is a carved Star of David that came from the ark doors in the former synagogue of the Cork Hebrew Congregation on Union Terrace, Cork, after it closed in 2016.

Two carpets with Hebrew inscriptions on the wall of the shul were bought in Jerusalem. Between the two carpets, one of the doors from the ark in the former synagogue in Cork provides a frame for an earlier parochet or ark curtain.

The late Joe Moran made the Bima or table for reading the Torah scroll from a Victorian table. 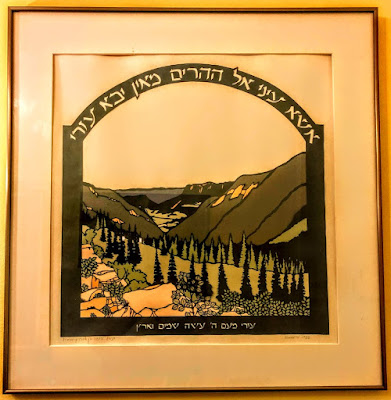 Psalm 121 quoted on a paper-cut by the artist Daniel Howarth (Photograph: Patrick Comerford, 2020)

This piece is the work of the artist Daniel Howarth from Colorado, who has an Irish Catholic background. He was introduced to Judaism through paper-cut art, converted to Orthodox Judaism, married Debbie and had eight children. Howarth lived in the Jewish Quarter in Jerusalem in the 1980s, but the background depicted in this work is the Colorado Rockies, not the Jerusalem Mountains – not even the Blackstairs Mountains.

The floor carpet was bought in Istanbul and was said to have come from an Armenian Church. 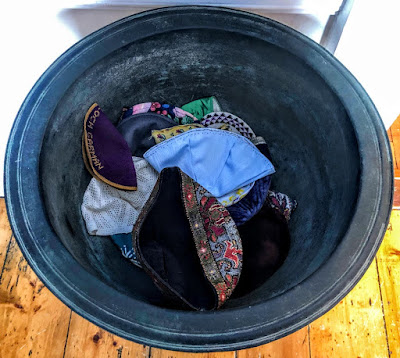 Kippot are available at the door – including one in the Wexford colours of purple and gold (Photograph: Patrick Comerford, 2020)

Beth El is an unaffiliated synagogue, and is usually open from late April to early September, although there may be some weeks when it is not available. It is a popular place to visit for Jews from the US and Israel.

Erev Shabbat and Shabbat Morning Services and Shabbat Mincha are conducted each week that the shul is open. Seating in general is mixed and davening or liturgical prayer uses an Orthodox Siddur or prayer book. Beth El has also been a venue for b'nai mitzvah. A strictly Orthodox service can be arranged with prior notification.

Visitors are advised to bring photographic ID, dress is smart casual but modest, men must always wear a kippa inside the shul – kippot are available at the door – and mobile phones should be switched off.

It is essential that intending visitors to Beth El make contact before planning a visit. 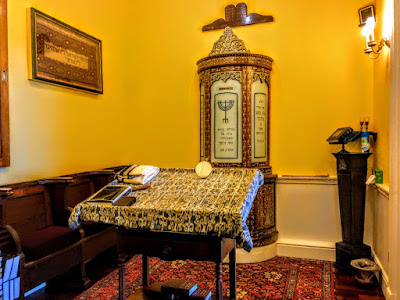 The Aron haKodesh is from Damascus and the panels were painted by the artist Ilan Baruch (Photograph: Patrick Comerford, 2020)

Only one little error - I'm 'Joey' Silver. The late Joseph Moran was 'Joe'.
Wonderful blog, and all accurate.
Best Wishes,
Shana Tova to Barbara and to you.
And have a good week [Shavua Tov]
Joey