Four presidents and
a funeral in Sneem 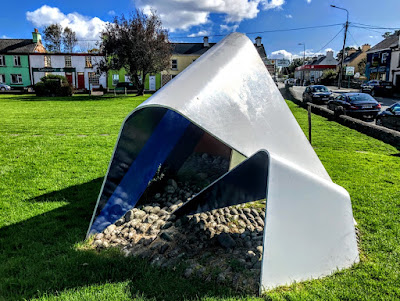 Cearbhall Ó Dálaigh retired to Sneem when he retired as President of Ireland; Charles de Gaulle sought peace in Sneem and time away from the limelight after he resigned as President of France in 1969; and all four are connected through a series of modern sculptures that are part of the Sneem Sculpture Trail on the Ring of Kerry, which I stopped to visit last week.

Cearbhall Ó Dálaigh (1911-1978), was the fifth President of Ireland from December 1974 to October 1976. He had also been a Judge of the European Court of Justice, Chief Justice of Ireland, a Supreme Court judge, and had twice served as the Attorney General.

Cearbhall Ó Dálaigh was born on 12 February 1911, in Bray, Co Wicklow, and later moved to No 15 Portobello Road, near ‘Little Jerusalem’ and the South Circular Road area in Dublin, where his childhood friends included the Chief Rabbi’s son, the future President of Israel, Chaim Herzog. He was educated at Saint Cronan’s Boys National School, CBS Synge Street, Dublin, and University College Dublin. At UCD, he was auditor of An Cumann Gaelach and of the Literary and Historical Society. He was a keen actor in his early years and a close friend of the actor Cyril Cusack. He also became Irish language editor of The Irish Press.

Ó Dálaigh was a member of the Fianna Fáil national executive in the 1930s. He was Ireland’s youngest Attorney General in 1946-1948, when Éamon de Valera was Taoiseach, and was Attorney General again in 1951-1953. He was nominated by de Valera as the youngest-ever member of the Supreme Court by in 1953. Less than a decade later, he became Chief Justice on the nomination of Seán Lemass.

During the Vietnam War, he spoke out against US bombing of North Vietnam, and he was a life-long opponent of capital punishment.

When Ireland joined the EEC, Jack Lynch appointed Ó Dálaigh as Ireland’s judge on the European Court of Justice. When President Erskine Childers died suddenly in 1974, all parties agreed to nominate Ó Dálaigh to succeed him.

As President, Ó Dálaigh had a strained relationship with the government, particularly with the Taoiseach, Liam Cosgrave, and with Conor Cruise O’Brien. His decision to refer the Emergency Powers Bill to the Supreme Court in 1976 to test its constitutionality brought him into conflict with the Fine Gael-Labour coalition.

When the Supreme Court ruled the bill was constitutional, he signed it into law on 16 October 1976. On the same day, an IRA bomb killed Garda Michael Clerkin in Mountmellick. On the following day, the Minister for Defence, Paddy Donegan, visiting a barracks in Mullingar to open a canteen, attacked the President for sending the bill to the Supreme Court, calling him a ‘thundering disgrace.’

As President, Ó Dálaigh was Commander-in-Chief of the Defence Forces. He felt the relationship between the President and the Minister for Defence had been ‘irrevocably broken’ by the minister’s remarks before of the Chief of Staff and senior officers. Donegan offered his resignation, but Cosgrave refused to accept it. Ó Dálaigh resigned as President on 22 October 1976 ‘to protect the dignity and independence of the presidency as an institution.’ He was succeeded as President by Dr Patrick Hillery.

Ó Dálaigh retired to Sneem and died of a heart attack in 1978, less than two years after resigning. He was buried in Sneem after a state funeral in the village.

The National Memorial to Ó Dálaigh on the South Square Fair Green in Sneem was designed by the Cork sculptor Vivienne Roche and was unveiled by President Hillery on 5 June 1983.

The artist describes it as reminiscent of mountains and megalithic structures that were of particular interest to the late President. 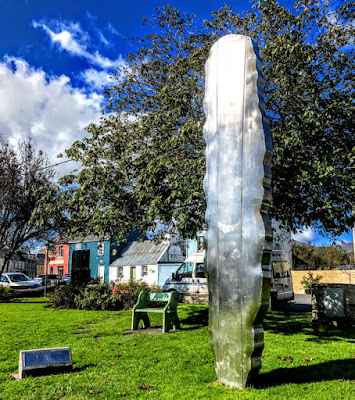 A second sculpture in Sneem commemorating President Ó Dálaigh was presented as a gift to the people of Ireland by President Chaim Herzog (1918-1997) of Israel, who unveiled the sculpture on 19 June 1985.

They had been childhood friends, and when Ó Dálaigh was inaugurated as president in 1974, he started a tradition of presidents visiting Adelaide Road synagogue in Dublin.

The former Chief Rabbi Isaac Cohen once credited Ó Dálaigh with fashioning ‘unbreakable ties of affection, esteem and honour in the hearts of Jewish citizens in this country.’ 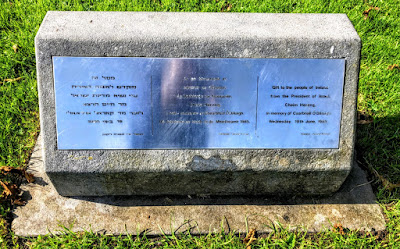 The sculpture in the North Square Fair Green is in the form a stainless steel tree and was sculpted by Israeli artist Tamara Rickman. It is part of the Sneem Sculpture Trail.

Beside this sculpture, a trilingual dedicatory plaque is in Hebrew, Irish and English.

President Herzog’s father was Chief Rabbi of Ireland, and he went to school in Wesley College, Dublin. During that state visit to Ireland in 1985, he also opened the Irish Jewish Museum in Dublin. 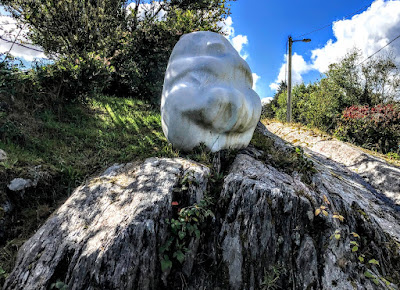 The Chinese panda is the work of the Chinese sculptor Liu Huanzhang (Photograph: Patrick Comerford, 2020)

The third memorial to President Ó Dálaigh is a white marble panda at the entrance to the Pier Road. It was donated in friendship by the Peoples’ Republic of China in 1986. The panda is the work of a leading Chinese sculptor Liu Huanzhang.

Cearbhaill Ó Dálaigh had visited China, was an early advocate of Chinese admission to the United Nations, and was the patron of the Irish Chinese Cultural Society.

The trilingual inscription in Chinese, Irish and English says: ‘May the friendships between the peoples of China and Ireland live for ever. Dedicated to the former President of Ireland, His Excellency the late Cearbhaill Ó Dálaigh, by the Chinese People’s Association for Friendship with Foreign Countries.’ 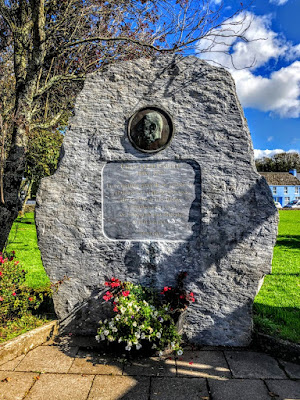 A memorial stone in the North Square in Sneem commemorates General Charles de Gaulle (1890-1970). After he resigned as President of France in 1969, de Gaulle spent six weeks in Ireland, from 10 May to 19 June 1969, including two weeks in Sneem.

In an editorial, The Irish Times declared, ‘The presence of General de Gaulle in Sneem, Co Kerry, is almost as bizarre, in its first impact, as would be the announcement that Chairman Mao had arrived in Bangor, Co Down, to enjoy the amenities of Pickie Pool.’

For two short weeks in the winter of his years, de Gaulle found a haven of peace and tranquillity in Sneem. At the time, it was said his wife’s nanny was from Sneem, and he took four rooms at the Heron Cove Hotel just outside the village. He wrote on 18 June 1969, ‘At this solemn moment of my long life here I have found what I am looking for: to be facing myself. Ireland has extended it to me in the most delicate, the most friendly manner.’ 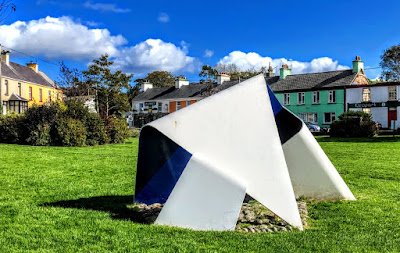