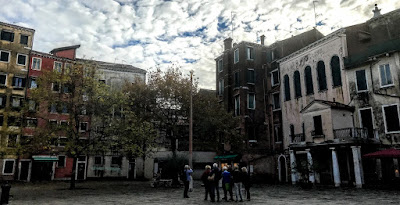 Thew Jewish Museum is in the heart of the Ghetto in Venice (Photograph: Patrick Comerford, 2018)

Normally, during the first few weeks in November, I take a few days off for a city break, to mark some special family days and in advance of the busy seasons of Advent and Christmas.

Two of us had planned to spend a few days around this time in Paris. But when the pandemic travel restrictions were introduced, we lowered our sights and planned a city break in Galway. That too was cancelled in recent days, and we had panned to stay in Co Limerick, with dinner and an overnight stay at the Mustard Seed in Ballingarry.

But that too fell by the wayside, and over weekend dinners in the rectory we reminisced about previous city break in November, including Bratislava (2019), Venice (2018), Bologna and Ravenna (2017), and Krakow and Auschwitz (2016).

We have promised to return to Venice as soon as possible. Meanwhile, it was heartening in the last few days to learn that he Jewish Museum of Venice, which I visited this week two years ago, is undergoing a full-scale expansion and redevelopment following the Jewish High Holidays at the end of September. The project is expected to take about three years to complete and to cost about €9 million.

The project was announced earlier this summer by the Mayor of Venice, Luigi Brugnaro, the President of the Jewish Community of Venice, Paolo Gnignati, the Director of the Jewish Museum of Venice, Marcella Ansaldi and the Venice-based art historian and philanthropist David Landau, who is managing the project.

The museum was founded by the Jewish Community of Venice in 1953. The museum is on the main square of the ghetto in Venice, and includes an exhibition of religious objects and other items, and it offers tours of three of the five 16th century synagogues in the Ghetto.

One area of is dedicated to the cycle of Jewish holidays and the liturgy. It displays books and manuscripts, precious objects and textiles from the 16th to the 19th century and objects of religious life. A second area tells the story of the Ghetto and the persecution of the Jews, from its origins to the concentration camps in World War II.

The Jewish population of Venice in 1938 had numbered 2,000; by the end of World War II and the Holocaust, this number was reduced to 1,500 or, according to some sources, 1,050. Only eight Jewish people from Venice survived the death camps.

Words from the Book of Job in the Jewish Museum … a chilling reminder of the Holocaust (Photograph: Patrick Comerford, 2018)

The architect Alessandro Pedron is responsible for the planned renovation. According to his plans, the Museum complex will be enlarged from its present 1,200 square metres to 2,000 square metres.

The renovation work includes reinforcing the Jewish Museum building. The cafeteria, bookshop and toilets area will be expanded, there will be new exhibition and educational spaces, and the Jewish community library and archive are to be redesigned in an expanded space. The museum will also be adapted to the needs of disabled visitors, with the installation of two internal lifts.

The project plans to connect the main building, where the museum and the two synagogues are located, with the building that hosts the Italian Synagogue, which will also be opened to visitors.

The expansion of the museum will incorporate a Ghetto apartment beneath the German Grand Synagogue, and the installation of an exhibition that recreates the living conditions of a Jewish family in the Ghetto in 16th century Venice. 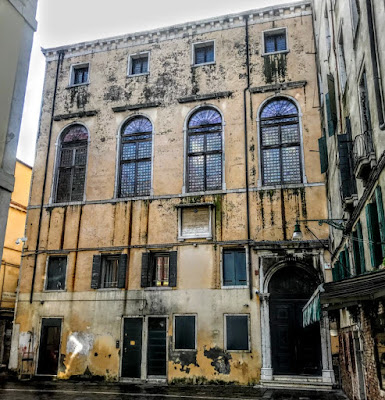 The Scuola Spagnola was founded around 1580 by Spanish and Portuguese speaking Jews (Photograph: Patrick Comerford, 2018)

Recent reports say 60 per cent of the €9 million needed for the project has already been pledged, with contributions from about 20 US and European private investors. Local reports said the President of the World Jewish Congress, Ronald Lauder, had donated €2 million to the project.

Some reports say the museum will remain open to the public during the three-year project. But, since some parts of the museum will be temporarily closed, the Jewish community in Venice plans to open other spaces inside the ghetto that are normally closed to the public.

The museum is located in the Campo di Ghetto Novo. In that square and in the Campo di Ghetto Vecchio there are several midrashim inside buildings owned by the Jewish Community, two other 16th century synagogues – the Scola Levantina or Levantine Sephardic Synagogue, founded in 1541, and the Scuola Spagnola (Spanish Synagogue), founded around 1580 by Spanish and Portuguese speaking Jews – kosher restaurants, a guesthouse, an old people’s home, a small biblical garden, a bakery and grocery shop, as well as many buildings with mezuzot on the doorposts that indicate Jewish residents.

The new plan for the museum was made public this year, six years after an earlier, $12 million renovation plan for the museum and three synagogues was announced in November 2014. At the time, it was hoped that project would be completed by 2016, in time for the 500th anniversary of the establishment of the Venice Ghetto in 1516.

However, this was never carried out, although some restoration work was carried out in the synagogues, funded through the World Monuments Fund.

A conversation with David Landau, who is managing the project and Marcella Ansaldi, Director of the Jewish Museum of Venice, touring the museum and the three synagogues to be restored