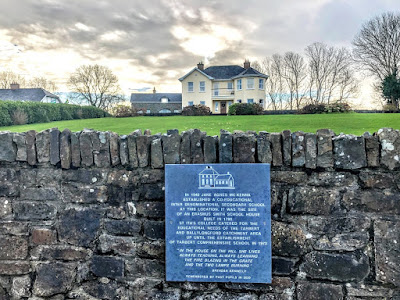 The Erasmus Smith School was once part and parcel of the life of Kilnaughtin Parish in Tarbert, Co Kerry. The school stood on a site just a few metres west of Saint Brendan’s Church of Ireland parish church, and the site is still remembered today, marked by a plaque erected on the wall earlier this year.

Erasmus Smith (1611-1691) from Husband’s Bosworth in Leicestershire acquired land in Ireland during the political turmoils of the mid-17th century. He used some of his new-found wealth to endow Grammar Schools in Irish towns, including the Erasmus Smith High School in Dublin, the Grammar Schools in Drogheda, Galway, Ennis and Tipperary. Later, other grammar schools founded on the same principles became known as Erasmus Smith schools.

The Erasmus Smith School in Tarbert was sanctioned in 1785, and was built in 1790 with a grant of £300 on a site donated by Sir Edward Leslie of Tarbert House.

John Paul Jones (1747-1792) sought shelter for his ship at Tarbert when he was chased by the British navy during the American War of Independence. To confuse his pursuers, it is said, John Paul Jones sent men ashore to place lanterns in the trees, indicating he was still in the bay. Then, under cover of darkness, he sailed silently out to Valentia and on to the US where he founded the US navy. The story is said to have inspired the name of the Lanterns Hotel on the road from Tarbert to Glin.

Benjamin Franklin (1706-1790) came to visit Sir Edward Leslie in Tarbert in 1771 as part of his efforts to rekindle trade between Ireland and America. Around the same time, Franklin also visited Erasmus Darwin in Lichfield.

Franklin presented Sir Edward with a type of rose which, when planted in the gardens of the house, became the inspiration for the famous Rose Pattern that was woven into the curtains that hang to this day in Tarbert House. The pattern has been used since then in curtains as far away as the White House by Nancy Regan, who also visited Tarbert House.

Wilson described Tarbert House in 1786 as ‘happily situated on an eminence commanding an extensive view.’

Daniel O’Connell was also a friend of the Leslie family and Tarbert House still holds a parchment that is a plea to the House of Commons in 1813 for Catholic Emancipation, signed by bishops, politicians and other notables, including Daniel O’Connell and his brother.

When Leslie died at Weymouth in 1818, his title died out. By then, Tarbert House had passed to his first cousin, Robert Leslie, who moved there from Leslie Lodge.

The Limerick-based architect James Pain (1779-1877) was involved in alterations to the school in Tarbert in 1833.

The school’s property documents have survived for the period 1866-1894, but the school seems to have been discontinued from 1894.

Jane Agnes McKenna established a co-educational inter-denominational secondary school on the site of the former Erasmus Smith School in Tarbert in 1940. Saint Ita’s College catered for the educational need of children from the Tarbert and Ballylongford catchment area until Tarbert Comprehensive Schooll was established in 1973. 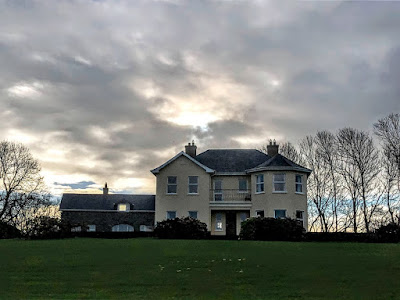 A house now stands on the site of the former Erasmus Smith School in Tarbert, Co Kerry (Photograph: Patrick Comerford, 2020)