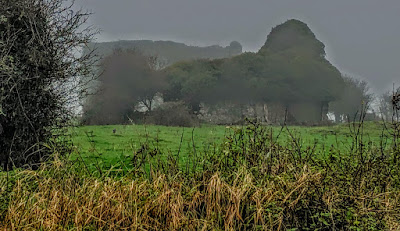 The ruins of the Bishop’s Palace or castle and Toomdeely Church, seen through the mist on a winter afternoon (Photograph: Patrick Comerford, 2020)

I was writing yesterday how, apart from Saint Mary’s Church, there are three church ruins within walking distance of Askeaton that have served as Church of Ireland parish churches in times past: the church at Morgans North (or Dysert), which I visited at the end of last month, and the churches at Lismakeery, near Creeves and Toomdeely, near the point where the River Deel flows into the Shannon Estuary.

I recently visited the site of the church ruins at Toomdeely, north of Askeaton, and although the ecclesiastical ruins were difficult to see in the winter fog moving in from the Shannon Estuary, it was an interesting visit because of the links of the former parish with my predecessors as Precentors of Limerick, and the links of the castle ruins with the mediaeval and early modern Bishops of Limerick.

The church at Toomdeely, about 3 km north of Askeaton, near the mouth of the River Deel, was built ca 1201. Research shows that Toomdeely or Droomdeely was an independent parish.

The name of Toomdeely or Droomdeely is said to be derived from the tuaim, tumulus or burial ground, represented by a group of pillar stones near Knockeegan fort nearby. However, the 19th century antiquarian and topographer John O’Donovan (1806-1861), who surveyed the site for the Ordnance Survey, believed the name signifies the ‘Bush of the River Deel.’

The parish of Toomdeely, measuring 1,275 acres, was bounded on the east by Askeaton, separated from it by the River Deel, bounded on the west by the parishes of Morgans and Robertstown, and on the south by Lismakeery.

The church and parish were granted by Henry Mineter in the early 13th century to Hubert de Burgo, Bishop of Limerick (1223-1250). The imposing building attached to the church was known as the Bishop’s Palace, although other local accounts say the castle was built by the O’Mahony family.

Hubert de Burgh was a Dominican friar and Prior of Athassel in Co Tipperary. He was one of the great benefactors of Saint Mary’s Cathedral, Limerick. The Pope ordered commission in 1226 to investigate if the Bishop of Limerick was illegitimate, simoniacal, ignorant and disobedient to his metropolitan, the Archbishop of Cashel.

He was favoured by the Crown, and the king asked the clergy of Armagh to elect de Burgh as Archbishop of Armagh in 1227 in succession to Luke Netterville. Instead, however, they elected Donatus Ó Fidabra, Bishop of Clogher.

Meanwhile, de Burgh refused to co-operate with the papal commission, and was declared illegitimate in 1238. However, perhaps through royal favour, he remained Bishop of Limerick until he died on 14 September 1250.

The lands of Toomdeely were granted to Margery, widow of Tyrry de Kardyff, in 1251. She was probably related to Thomas de Cardiff or Thomas de Kerdiff, who was the Chancellor of Limerick ca 1223-1250 and Vicar of Askeaton in 1237.

The church and parish of Toomdeely were in the possession of Maurice de Rupe forte or de Rochfort, when he became Bishop of Limerick in 1336. He died in 1353.

Thomas fitzJames FitzGerald held Toomdeely in 1580 as part of the Lordship of Cleanlish, which probably took its name from Greenish Island at the mouth of the River Deel, where it meets the estuary of the River Shannon.

Toomdeely was granted in 1590 to Francis Berkeley, whose brother, Edward Berkeley, had been sent to Askeaton ten years earlier by the Lord Deputy, Leonard Grey, to assist the Crown in the suppression of the Desmond rebellion.

The inhabitants of Toomdeely were pardoned in 1601 for supporting the rebellion of James FitzThomas FitzGerald, the ‘Sugán’ Earl of Desmond. The Sugán Earl had attacked Askeaton Castle in 1598, but he was captured in May 1601 and he later died at the Tower of London in 1608. The title was then claimed by his younger brother, John FitzThomas FitzGerald, who had fled to Barcelona with his wife, a Comerford from Danganmore, Co Kilkenny, and their son, Gerald FitzGerald, known as the ‘Conde de Desmond.’

Toomdeely is listed in 1615 as a manor of the Bishop of Limerick, at a rent of 5 Marks, or £2 13s 4d. This rent was probably paid to Maurice Berkeley, son of Francis Berkeley, at Askeaton Castle that same year. However, by then, the manor was in a state of neglect, and the rent was only paid by the bishop as a nominal fee.

Roger Boyle (1621-1679), Lord Broghill, third surviving son of Richard Boyle, Earl of Cork, was the landlord of Toomdeely in 1655. He spent many years abroad, and when he returned to Ireland, he became a leading Cromwellian or Parliamentarian officer.

Boyle was MP for Arundel, which may explain why the name of Toomdeely was sometimes rendered as Arundel. At the restoration of Charles II, he was given the title of Earl of Orrery in 1660 and became Lord President of Munster. He was also responsible for the early development of Charleville, Co Cork, which was named in honour of Charles II.

The church ruin at Toomdeely dates from the 15th century. John O’Donovan noted in the mid-19th century that the church was divided into a nave and choir or chancel. The nave then measured 34 ft by 24 ft 2 in and the chancel measuring 21 ft by 15 ft 3 in. The side walls of the choir were 10 ft 6 in high and those of the nave 12 ft 6 in.

He said that by then all the features of the church were destroyed but that one could ‘clearly see from the breaches in the walls where its doorway and windows were placed.’ The was gable was ‘in good preservation and remarkably sharp at the top, but the east gable, which was of considerable size, entirely disfigured.’

The south wall of the nave was near the west gable but had been reduced to ‘a formless breach.’ He also found a small window on the south wall near the choir arch, but it was entirely disfigured.

The north wall and west gable had no features.

All the walls were built of limestones of considerable size, and cemented with lime and sand mortar.

O’Donovan also notes that the surrounding churchyard had been tilled and by then was part of a green field.

The ruins of the rectangular, castle-like house to the south and west of the church measured about 72 ft in length and 40 ft in breadth.

The living was in the gift of the Precentors of Limerick, who were Rectors of Dromdeely, and the parish was part of the Union of Nantenan and what was known as the ‘corps’ of the precentorship.

The tithes once amounted to £75, of which £50 was paid to the Precentor and £25 to the Vicar. In the Church of Ireland, a list of Vicars of Dromdeely or Tomdeely survives from 1622, when the Revd John O’Teagh was vicar. He was followed by the Revd John Wood, who was in the parish in 1628.

From the mid-17th century, many of these Vicars of Dromdeely were also Vicars of Askeaton.

The last appointed Vicar of Dromdeely was Canon Henry Wilson Stewart (1772-1857), who was vicar from 1812 until he died on 14 April 1857 at the age of 84. At the same time, he was the rector of parishes in the Diocese of Ross in Co Cork, and never lived in the Askeaton area. 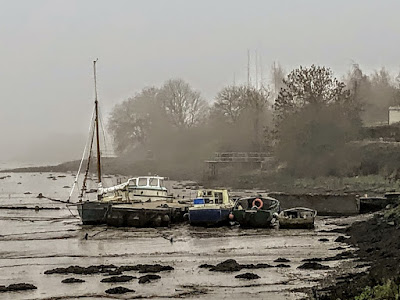 The banks of the River Deel, near Toomdeely, on misty and foggy afternoon (Photograph: Patrick Comerford, 2020)