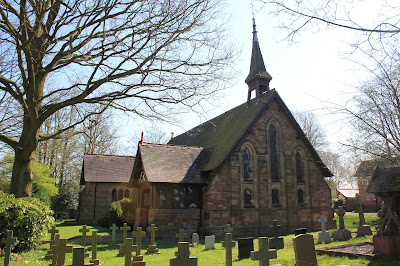 When I was researching the story of Haselour Hall at Harlaston, I came across the story of the small and unique Catholic community in nearby Haunton, where the church has close links with the de Trafford family of Haselour Hall and the Mostyn family who were descended from the Comberfords of Comberford Hall, and with AWN Pugin, the architect of the Gothic revival in 19th century England.

The Church of Saint Michael and Saint James in Haunton reflects not just Haunton’s but also Staffordshire’s Catholic history. The church has its roots in the three great strands of the Catholic revival in the 19th century: the Oxford Movement, the Gothic revival associated with Pugin, and the new freedoms that enabled old Recusant or Catholic families to fund building churches and schools.

Haunton, a village in southeast Staffordshire, lies on the River Mease, about 11 km north of Tamworth, 15 km east of Lichfield, 10 km north-east of Comberford, and half-way between the neighbouring villages of Harlaston and Clifton Campville. The local authority is Lichfield District Council

The name of Haunton is believed to be Old English, meaning Hagena’s or Hagona’s farm. The chapel of Saint James the Greater at Haunton is mentioned in Domesday, and the chapel at Haunton was part of the parish of Saint Andrew, Clifton Campville, until the Reformation, when the chapel fell into disrepair.

A Catholic mission was started in Haunton in 1845 by Colonel Charles Edward Mousley (1819-1887), who had inherited Haunton Hall, built in the 1820s. Colonel Mousley also inherited his Catholicism from his Spanish mother and through his father’s links to Staffordshire’s Catholic past.

The Mousley family commissioned AWN Pugin in 1845 to design a chapel at the Hall dedicated to Saint Mary. Soon it too small for a growing Catholic population and there was talk of building a new church on land opposite the hall. The chapel was blessed by Bishop Nicholas Wiseman (1802-1865), later Cardinal Wiseman and Archbishop of Westminster; like Colonel Mousley, Cardinal Wiseman was also born in Spain.

At first, the chapel at Haunton Hall was used mainly by the Mousley family, and Mass was celebrated there seven times a year by the parish priest of Tamworth, who reported in 1852 that there was a congregation of about 10.

In the decade that followed, the influence of the Oxford Movement came to Haunton through the Revd Henry John Pye, Rector of St Andrew’s, Clifton Campville, and the son of the Lord of the Manor of Clifton Campville. Pye was educated at Cambridge and in 1851 he married Emily, daughter of Samuel Wilberforce (1805-1873), Bishop of Winchester and previously Bishop of Oxford and Dean of Westminster. Emily was a granddaughter of William Wilberforce, the anti-slavery campaigner.

After a long and complex spiritual journey, Henry and Emily Pye decided to become Roman Catholics in 1868. It was a difficult decision, Pye had to resign as rector, and for a time he was cut off from his family at Clifton Hall and from his inheritance.

Henry became a barrister and a magistrate and in time was reconciled with his family. By 1880, Henry and Emily had returned to Haunton and they decided to build a new Catholic church to replace Pugin’s chapel. They donated a site but needed more money to realise their dream.

Meanwhile, Augustus de Trafford had moved into to Haselour Hall, about 5 km from Haunton, in 1885. He was a son of a baronet and a member of an old Lancashire Catholic family. Around the same time, the recently widowed Lady (Frances) Mostyn (1826-1899) moved into Haunton Hall as a tenant. The Mostyns are descendants of the Comberford family of Comberford Hall; her husband was Sir Pyers Mostyn (1811-1882), and her son, Francis Mostyn (1860-1939), later became Archbishop of Cardiff (1921-1939).

Together, the Mousley, Pye, de Trafford and Mostyn families found the finances to build a new church on Pye’s land opposite Haunton Hall in 1885. The new church, dedicated to Saint Michael, was extended, using masonry from the ruins of the Chapel of Saint James, and was rededicated to Saint Michael and Saint James. Pye also built a presbytery and gave the whole site to the diocese.

The first burial at the new church was of Colonel Mousley, the effective founder of the mission, who died in 1887.

The church was replaced in 1902 by a new church designed by Edmund Kirby of Liverpool, a pupil of Pugin’s oldest son, Edward Pugin, and was built by Isaac Ward & Son, contractors of Uttoxeter.

Archbishop Edward Ilsley of Birmingham laid the foundation stone of the new nave on 23 May 1901. The church was built of red and white Hollington sandstone with Broseley tile roofs. At the opening on 22 May 1902, Lady Mostyn’s son, Archbishop Mostyn, presided at a Pontifical High Mass and Archbishop Isley preached.

The church was financed with little debt and was consecrated on 20 June 1907, when a new high altar and organ were introduced. The altar was presumably designed by Kirby. The Tablet said ‘the columns are of pavanazzo marble and the super-altars are also of rich marble. The tabernacle is of pure white alabaster, beautifully carved with angels and the emblems of wheat and the vine.’

The original altar in Pugin’s chapel was taken to the Church of Saint John the Baptist in Tamworth ca 1907, but has since been lost but for one panel.

Kirby’s church is a handsome and substantial stone building in the Early English style, with a small timber bell tower. The architectural historian, Sir Niklaus Pevsner, in his guide to Staffordsbire, notes that it looks ‘entirely like’ a Church of England church.

The church is built in red and white Hollington sandstone with a timber bellcote at the west end. It has a distinctive heavy scissor-trussed roof, and the interior fittings are of high quality. It retains the late 19th century chancel and incorporates mediaeval masonry and contains.

The font is in a late 12th century Romanesque style, but its provenance is uncertain. It may have been found next to the River Mease, but another source says it was imported from Treviso. Whatever its origin, it was probably not designed as a font as it displays no obvious Christian symbols.

The 20th century oak pulpit and communion rails are said to have been carved by a nun, although The Tablet reported in 1906 that a pulpit then newly installed was made by Burns & Oates. The proposed west end gallery was never built.

The collection of early 20th century glass in the nave and chancel is mainly by Hardman and Co of Handsworth. They are influenced by Pugin and have strong gothic characteristics. Hardman’s east window is a memorial to Lady Mostyn. Hardman’s nave windows are mostly memorials to members of the Trafford, Pye and Mousley families. The most recent Hardman window in the chancel commemorates Oswald de Trafford who died in 1942.

The Lady Chapel is a later addition. The chapel’s side windows by Alexander Gascoygne were commissioned in 1925 by the Donisthorpe family of Enderby Hall, Leicestershire. Their appearance is almost pre-Raphaelite in style when compared with the Hardman windows.

‘Considerable repairs’ were carried out in 1958 and the church was redecorated in 2002, when a new floor was laid, and new heating and lighting were installed.

The church stands in a large burial ground with mature planting, a presbytery (1905) and the former school. Together with the other buildings and burial ground, the church makes a notable contribution to the local conservation area.

After the church was completed, a community of French nuns, the Sisters of Saint Joseph of Bordeaux, set up a convent in Haunton Hall in 1904. This later became Saint Joseph Convent School for Girls. The school closed in 1987 and is now a community hall. The nuns moved to a new convent, and Haunton Hall became a nursing home. The nuns moved to a house near Clifton Campville in 2010.

Today, Saint Michael and Saint James is a small parish and the Parish Priest, Father Eamonn Corduff, is based at Barton under Needwood. The parish is active and has strong ecumenical links with its Anglican neighbours at Saint Andrew’s Church in Clifton Campville. 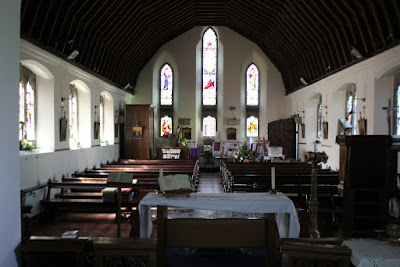