Saint Mary’s: The Parish Church that Looks Like Part of the College 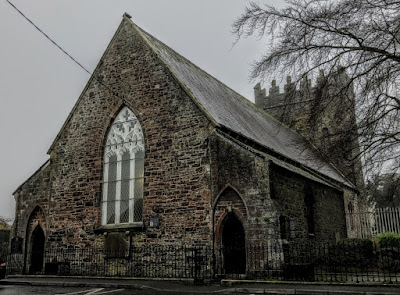 St Mary’s, the Church of Ireland parish church in Maynooth, is incorporated into the outer wall of St Patrick’s College, and while few students or graduates may have been inside the church, many still think it is part of the college buildings.

The church was originally built as a private chapel for Maynooth Castle when it was one of the principal residences of the FitzGeralds of Kildare.

At the arrival of the Anglo-Normans, the church at Laraghbryan was included in Strongbow’s list of church properties belonging to the Diocese of Glendalough in 1173. Soon after, however, Laraghbryan became subservient to Saint Mary’s, Maynooth, which was built by the FitzGerald family.

Maynooth was part of a pocket of churches and parishes in this part of north Kildare that were in the Diocese of Glendalough. St Mary’s became a Prebendal Church of St Patrick’s Cathedral, Dublin, in October 1248, at the request of Maurice FitzGerald. Richard de Carren was the priest of the parish at the time. From then on, the tithes of the parish supported one of the canons of the cathedral, and this canon, the Prebendary of Maynooth, was also the incumbent (parish priest or rector) of Maynooth. Medieval rectors and prebendaries included John de Sandford, later dean of St Patrick’s and Archbishop of Dublin; and Alexander de Bicknor, also a future archbishop.

Gerald FitzGerald, ninth Earl of Kildare, built and endowed a college at Maynooth in 1518, rebuilt the castle chapel and attached it to his college. But, at the Reformation, what had become the ‘King’s College of Maynooth’ was suppressed and the chapel became the Church of Ireland parish church of Maynooth.

St Mary’s Church, like other churches of the day, suffered in the Reformation conflicts, and rectors were appointed or removed at whim, depending on the religious fashions of the day. Edward Dillon, who was also dean of Kildare, was put to death as a rebel in the castle in 1535; Richard Johnson was pensioned off at the suppression of the cathedral chapter of St Patrick’s in 1547, was reappointed in 1555, was deprived again within six or seven weeks, and was appointed for a third time in 1572. In between, John Doyne spent less than a year at Maynooth before he was dismissed on charges of adultery.

Later, it was said, the church fell into disrepair and was used for keeping cattle. However, St Mary’s was extensively renovated in the 1630s by Richard Boyle, Earl of Cork, father-in-law of George FitzGerald (1612-1660), 16th Earl of Kildare. At the same time, Boyle was rebuilding Maynooth Castle.

During the wars of the 1640s, both the castle and the church fell into ruins. The FitzGeralds returned to appointing parish clergy after the Caroline restoration. Robert Price, who had survived the Cromwellian era, became the Restoration Bishop of Ferns, and his successor, Thomas Price, who was prebendary of Maynooth and Bishop of Kildare at the same time (1661-1667), became Archbishop of Cashel (1667-1678).

For much of the time, however, many rectors of Maynooth were absentees, pluralists, or both, and the real liturgical and pastoral work in the parish became the burden of the vicars or curates they appointed. However, the benign interest of the FitzGeralds ensured the parish did not suffer from clerical negligence, and a new schoolhouse was built beside the church in 1702.

James FitzGerald (1722-1773), first Duke of Leinster and father of Lord Robert FitzGerald, repaired St Mary’s Church in 1770, shortly after he had built Leinster House in Dublin, and the church was used by the Church of Ireland parish once again. The church was restored or repaired once more by the FitzGerald family in 1828, again in 1859 by Augustus Frederick FitzGerald (1791-1874), third Duke of Leinster. Throughout these times, the FitzGeralds retained the right to appoint priests to the church until disestablishment.

The large East Window is unusual because it is made of wood and set in stone. During the restoration in 1770, this window was taken from the church in Laraghbryan, which had fallen into ruin. Other windows came from the castle’s council chamber. The back end of the church and churchyard contains the last fragments of the medieval curtain wall of the castle.

From 1821 to 1875, the fifteenth-century tower was a mausoleum for the third Duke of Leinster, who lived at Carton, his wife Lady Charlotte Augusta Stanhope (1791-1874), duchess of Leinster, and seven members of their family. Before that, the family was buried in St Brigid’s Cathedral, Kildare.

A medieval font from Saint Coco’s Church in Kilcock was moved to Saint Mary’s in 1991. The small organ, dating from around 1820, is one of the few untouched Telford organs in Ireland. The church plate includes a large silver flagon and an alms dish given by Mary FitzGerald, Countess of Kildare, in 1744, and a chalice and paten dating from 1697. The church still exhibits prayer books from 1860 that identified the pews of the Duke of Leinster and his family.

The area on the north side of the church, behind the vestry, was a parish school from 1770 to 1859, when it was moved to the Geraldine Hall near the Royal Canal. The school closed in 1935. 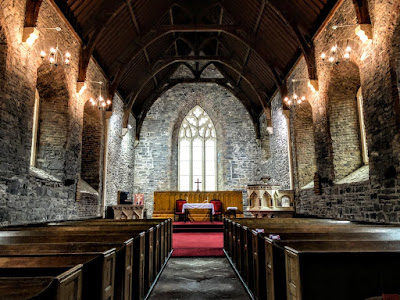 This is a chapter in We Remember Maynooth: A College Across Four Centuries, ed Salvador Ryan and John-Paul Sheridan (Dublin: Messenger Publications, 2020, 512 pp), pp 36-38.