‘The light shines in the darkness, and
the darkness did not overcome it’ 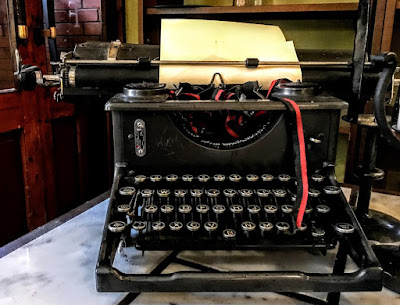 ‘In the beginning was the Word’ (John 1: 1) … an old typewriter seen in a restaurant in Limerick (Photograph: Patrick Comerford) 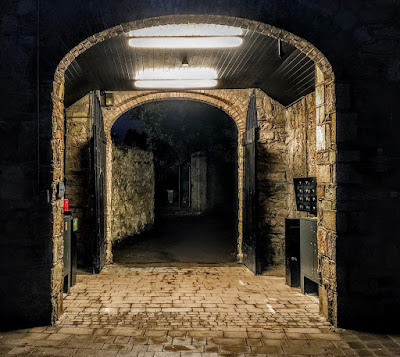 ‘The light shines in the darkness, and the darkness did not overcome it’ (John 1: 4) … light in the darkness in the courtyard in Marlay Park, Dublin, on New Year’s Eve last Thursday (Photograph: Patrick Comerford, 2020)

The Book of Sirach and the Wisdom of Solomon are unusual choices in the Lectionary for the readings this morning. Too often and too easily they are dismissed as Apocryphal readings, yet they bridge the gap between Jewish Wisdom literature and the ideas that are introduced in Saint John’s Gospel.

The author of Sirach, Jesus ben Sira, understood Wisdom as leading to prosperity, and in his opening words, he declares: ‘All wisdom is from the Lord, and with him it remains for ever’ (Sirach 1: 1).

This morning’s reading opens: ‘Wisdom praises herself, and tells of her glory in the midst of her people’ (Sirach 24: 1). For Jewish writers and thinkers, the created world is God’s, so faith and reason go hand in hand; learning about creation is learning about God; reasoning is done in the context of faith in God; and knowledge of God is seen as leading to wisdom.

The Wisdom of Solomon or the Book of Wisdom was written in Greek, probably in Alexandria in the mid-first century BC, and is part of the Wisdom literature in the Septuagint or Greek Jewish Bible, along with the Psalms, Proverbs, Ecclesiastes, the Song of Songs (or Song of Solomon), Job and Sirach.

The central theme of this book is ‘Wisdom’ itself. Wisdom (Σοφία, Sophia) is the perfection of knowledge of the righteous as a gift from God, showing herself in action, and Wisdom is with God from all eternity.

In this book, Wisdom, the spirit of God, is personified as Lady Wisdom. This book also tells us that being made in the image of God includes sharing with God in immortality.

Earlier in this chapter, the author says Wisdom has been God’s agent in saving people in the past, and active in saving the people of Israel, through Moses. They are blameless, for they have been chosen and set apart by God (verses 1-14).

Now we are told that Wisdom has delivered a holy and blameless people from their oppressors. Wisdom entered the soul of the ‘servant of the Lord,’ and delivered the people, guiding these people by day and by night, on dry land and through deep waters.

In response to this, even the mute and small children could no longer be silent, but sang out God’s praises.

The Gospel reading this morning brings us back to Saint John’s prologue to the Fourth Gospel.

This is not just a traditional Gospel reading that many of us associate with Christmas morning, but it is a wonderful piece of classical Greek poetry, and it makes so many connections with the Wisdom literature that provides the two other readings this morning.

The Prologue is first and foremost poetry. It is a hymn – a poetic summary – of the whole theology of this Gospel, as well as an introduction to it.

The Fourth Gospel, the Gospel according to Saint John, is one of the great works of literature, and its opening phrase, Ἐν ἀρχῇ ἦν ὁ λόγος, ‘In the beginning was the Word,’ is one of the most dramatic opening lines in literature.

This is such beautiful literature that I have often though that the Greek poetry and drama of Saint John’s Gospel would be a major possibility if I ever thought about researching and writing another thesis in theology.

The Prologue is an introduction to this Gospel as a whole. It tells us that the Logos is God and acts as the mouthpiece (Word) of God ‘made flesh,’ sent to the world in order to be able to intercede for humanity and to forgive human sins.

The Prologue is of central significance to the doctrine of the Incarnation. This Prologue can be compared with Genesis 1, where the same phrase, ‘In the beginning …,’ first occurs along with the emphasis on the difference between the darkness and the light.

This Prologue is probably one of the most profound passages in the Bible. As simple as its language and phrases are, its description of Christ as the Logos has had a lasting influence on Christian theology.

The prologue prepares the reader for the rest of the Fourth Gospel. Important themes are signalled and Christ’s identity is established at the very outset through the use of Christological titles, divine portents or the manner of his birth.

What about Saint John’s use of the term λόγος or Logos (1-2) – most frequently rendered ‘Word’ in modern English translations?

This term is deeply rooted in Old Testament thinking (see Genesis 1, Proverbs 8). The role of the Logos in Saint John’s writings also parallels, in ways, that of personified Wisdom in a number of traditions within Judaism, including Sirach and this morning’s reading. However, Wisdom and the Logos need not be identified with each other, since Wisdom is a creation of God (Sirach 1: 9), while the Logos is pre-existent and Divine.

The Prologue introduces a number of terms throughout Saint John’s Gospel and his letters. They include ‘life,’ ‘light’ (verse 5), ‘believe’ (verse 7), ‘world’ (verse 9), ‘children of God’ (verse 12), and ‘flesh’ and ‘truth’ (verse 14). These concepts are introduced in relationship to the Logos, who is decidedly at the centre of all that is being said.

The single most influential thinker in the 16th century Jewish mysticism, Rabbi Isaac Luria (1534-1572), thought deeply about why evil and suffering exist in the world. In a poetic-like response, he told a story of Creation in which God who is unlimited brings into being a limited, empty space in which Creation can occur.

The Almighty is everywhere, and only by contracting into himself – like a someone inhaling deeply to allow another person to pass by in a narrow corridor – could God create an empty space in which the Creation could occur.

Luria imagines God retracting a part of the Eternal being into the Godhead itself in order to allow such a space to exist, a sort of exile. And so, Creation begins with a Divine exile.

A stream of light then flows from God into the empty space God creates. According to Isaac Luria, God created vessels into which he poured his holy light. These vessels were not strong enough to contain such a powerful force and they shattered. The sparks of divine light were carried down to earth along with the broken shards.

The light of God pours into Creation too, and every time someone does something good, according to Rabbi Luria, we rescue one of those holy sparks and restore it.

The day will come, Luria imagines, when we all do our part, and the entire remaining Divine Light is restored to God’s world. Without access to the Divine Light, evil will be unable to survive and will crumble away to dust.

For Luria, our task, our human endeavour, is the commandment tikkun olam, to repair the world, to reverse the shattering of the vessels, to restore the light of God.

For Luria and his followers, redemption is bound up with creation – to the idea of ‘retracing the path’ to creation and revelation, in order to return to the ‘unity and purity’ of the beginning of the world.

Luria’s key ideas gave voice to the impossible brokenness of the human condition. The pain of the Divine breakage permeates reality. We inherit it; it inhabits us. But redemption – the tikkun olam that will repair the broken world – remains possible.

In the words of Leonard Cohen, ‘there is a crack in everything, that’s how the light gets in.’

In our frailty and our brokenness, we are open to redemption and to the light of the world.

As Saint John tells us in our Christmas message this morning, ‘The true light, which enlightens everyone, was coming into the world’ (John 1: 9). 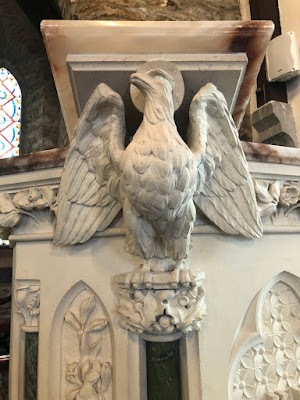 Saint John the Evangelist is often represented by an eagle … a carving on the pulpit in Saint Michael’s Church, Waterville, Co Kerry (Photograph: Patrick Comerford, 2020) 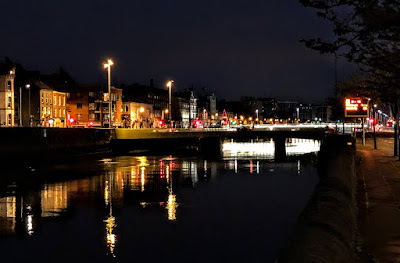 ‘The light shines in the darkness, and the darkness did not overcome it’ (John 1: 4) … the River Lee at night in Cork (Photograph: Patrick Comerford, 2020) 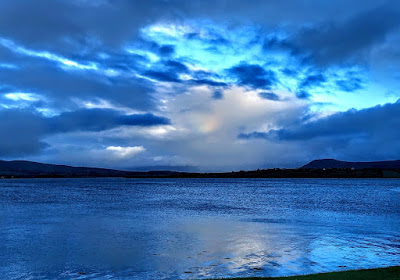 ‘The light shines in the darkness, and the darkness did not overcome it’ (John 1: 4) … evening lights at Knightstown on Valentia Island, Co Kerry (Photograph: Patrick Comerford, 2020) 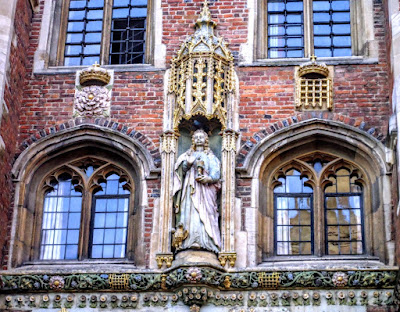 This sermon was prepared for Sunday 3 January 2021, and was part of a celebration of the Eucharist in Askeaton with limited attendance