Songs to remember the heroes
of the Warsaw Ghetto Uprising 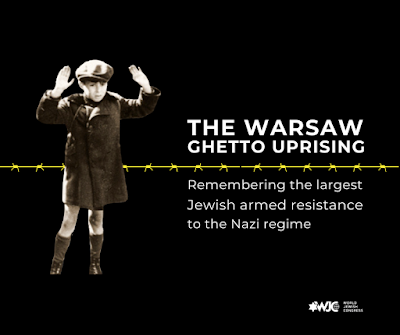 Since childhood, I have been haunted by the image of the terrified young boy in the Warsaw Ghetto

Since my early childhood, I have been haunted by the photograph of the terrified young boy with his hands raised in the Warsaw Ghetto. He was one of half a million Jews packed into the Warsaw ghetto, transformed by the Nazis into a walled compound of starvation and death.

During the past week, many people on social media have been marking this week’s anniversary of the Warsaw Ghetto Uprising, which began 78 years ago on 19 April 1943, the first night of Passover that year. It was the single greatest act of Jewish armed resistance during the Holocaust. They fought the Nazis from inside the ghetto for almost a month before being defeated.

The partisans were poorly armed as they fought back and were eventually defeated by German tanks and flame-throwers. When the uprising ended on 16 May 1943, the 56,000 survivors faced summary execution or deportation to concentration camps and slave-labour camps.

The Warsaw Ghetto was destroyed after the uprising, and the Nazis deported the remaining 50,000 Jews of the ghetto, most of them to the death camp in Treblinka.

Poland was once Europe’s Jewish heartland; 90 per cent of the 3.3 million pre-war Jews there had been wiped out by 1945. The Great Synagogue was not rebuilt.

The identity of the boy in the photograph has never been confirmed. He continues to remind me of myself at the same age. He has become one of the well-known faces of the six million Jews murdered by the Nazis in the Holocaust.

For my Friday evening reflections on the week of this anniversary, I am listening to Paul Robeson singing the ‘Song of The Warsaw Ghetto,’ Zog nit keyn mol (זאָג ניט קיין מאָל).

The ‘Partisan Song’ is a Yiddish song and one of the chief anthems of Holocaust survivors, and it is sung in memorial services around the world. The lyrics were written in 1943 by Hirsh Glick, a young Jewish inmate of the Vilna Ghetto who was inspired by news of the Warsaw Ghetto Uprising. The title means ‘Never Say’ and comes from the first line.

This song was adopted by a number of Jewish partisan groups in East Europe, and it became a symbol of resistance to the Nazis persecution of the Jews and the Holocaust:

Never say that you have reached the very end
When leaden skies a bitter future may portend
For sure the hour for which we yearn will yet arrive
And our marching step will thunder ‘We survive!’

For sure the hour for which we yearn will yet arrive
And our marching step will thunder ‘We survive!’

Not lead, but blood inscribed this bitter song we sing
It’s not a caroling of birds upon the wing
But ’twas a people midst the crashing fires of hell
That sang this song and fought courageous till it fell

Manus O’Riordan, in one of his many postings on the Warsaw Ghetto anniversary this week, also reminded me of Paul Robeson’s versions of The Kaddish of Rabbi Levi Yitzchok of Berditchev.

Robeson usually called it ‘The Hassidic Chant of Levi Isaac.’ It is a version of the Kaddish or memorial prayer attributed to the Hasidic master, Levi Yitzchok (1740-1809) of Berditchev. It is also known as the Din Toyre mit Got (‘The Lawsuit with God’).

Levi Yizchok is considered by many as the founder of Hasidism in central Poland. According to tradition, he had composed the song spontaneously on Rosh Hashanah as he contemplated the steadfast faith of Jewish people in the face of their ceaseless suffering.

He is said to have stood in the synagogue before the open Ark where the Torah scrolls are kept and issued his complaint directly to God:

After this questioning of divine justice, Levi Yitzhak proceeded to chant the Kaddish in attestation to God’s sovereignty and supremacy.

His song, of course, is not not be dismissed as some futile act of protest … it also becomes an affirmation of deep and profound faith in the face of adversity.