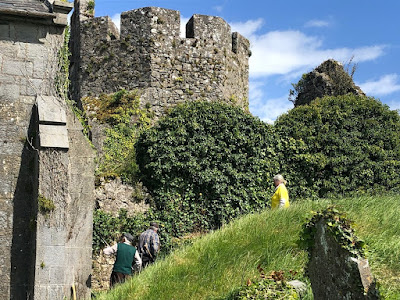 The aftermath of vandalism in Askeaton:

Since the attack on Saint Mary’s Church, Askeaton, in the early hours of Easter Day, when extensive damage was caused to the panels of the window at the south-east end of the church, the window has been repaired, and the church was looking particularly well when it opened again on Ascension Day, 13 May.

The messages of support from the community, including clergy and politicians, have been deeply encouraging for the parish.

Once again, many thanks are due to the dedicated parishioners who spent time cleaning up the church, securing the windows and clearing away the shattered glass strewn around the church.

The repairs to the window were followed by a weekend work party, clearing away ivy and growth in the old church ruins and around some graves in Askeaton.

Among the gravestone now visible is one marking the grave of the Revd William Henry Durell Lodge (1841-1883), a curate in Askeaton for 15 years until he died in 1883.

Joseph (Joe) Smyth of Deegerty, Askeaton, died on 9 May 2021, just three months after the death of his wife Linda. He is survived by his sons Kenneth and Victor, Gillian and Caroline, his sisters Susan, Dorothy and Evelyn, and a large, extended family. Late of IVETA Vintage Club.

His funeral took place in Castletown Church, Kilcornan, on Ascension Day, 13 May, and he was buried in Saint Mary’s Churchyard, Askeaton.

Pieta House is making on enormous impact in its work with people in crisis and those impacted by suicide. A number of parishioners supported the ‘Darkness into Light’ walk at sunrise on 8 May, helping to spread light and give the gift of hope.

The Heritage Council has awarded €14,880 to Ballingarry Development Association to carry out conservation works on the McCarthy vault in the churchyard in Ballingarry. Additional funding of €2,000 has come from Councillor John O’Donoghoue in match funding from his GMA allowance.

Although the church closed in 1978, Ballingarry remains a cherished part of this group of parishes, and it is encouraging to see community groups continuing to take an interest in the graves in the churchyard. 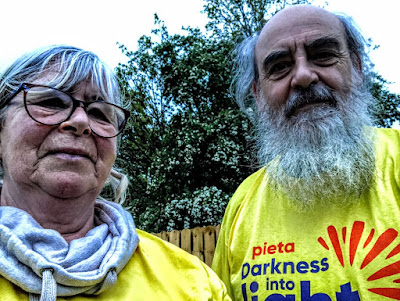 Supporting the ‘Darkness into Light’ walk at sunrise on 8 May

This is an edited version of the Rathkeale and Kilnaughtin Group of Parishes parish notes in the June 2021 edition of Newslink, the Limerick and Killaloe Diocesan Magazine (pp 19-20)