Was Saint James’ Church
in Dingle built by Spanish
traders and pilgrims? 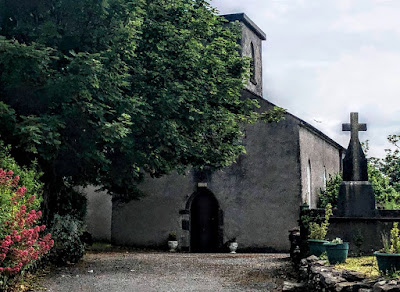 Saint James’ Church, the Church of Ireland parish church in Dingle, Co Kerry, is on the north-east side of the Main Street, within the mediaeval walled town.

This site dates back to at least the 13th century, when the church was appropriated to the Augustinian priory of Saint Mary’s, Killagh, near Castlemaine.

The earliest reference to a church in Dingle is in the Papal Taxation of 1317. The advowson of the church of Dingle was conferred on the Priory of Canons Regular of Saint Augustine of Killaha (de Bello Loco), near Killorglin, founded by Geoffrey de Marisco, Justiciar of Ireland. The Priors of Killaha appointed the Vicars of Dingle.

Local tradition says the mediaeval parish church in Dingle was built by Spaniards. Some of the original masonry, including a number of chamfered quoins, was used to build the current church. 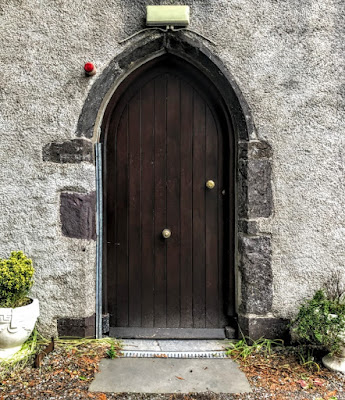 Saint James’ Church is also a venue for concerts and recitals and has a prominent role in Dingle Festivals (Photograph: Patrick Comerford, 2021)

There are historic connections between Dingle and Spain. It is said Dingle port, along with the ports of Dublin, Drogheda, Galway, New Ross, and Waterford, was a point of embarkation for mediaeval pilgrimages to the shrine of Saint James at Santiago de Compostela in Galicia, via La Coruna.

However, the claims to Spanish influence on the church building seem to be exaggerated. While Spanish fishermen are known to have fished extensively on the south-west coast of Ireland from about 1400 on, exotic origins may have fascinated the imaginations of many.

The Treaty of Dingle was signed at Saint James’ Church on 28 April 1529, by James FitzGerald, 11th Earl of Desmond, and the envoy of the Charles V, Holy Roman Emperor and King of Spain. This treaty incorporated most of southwest Ireland into the Habsburg Monarchy, and gave Irish people citizenship rights in Habsburg Spain, Austria and the Netherlands. 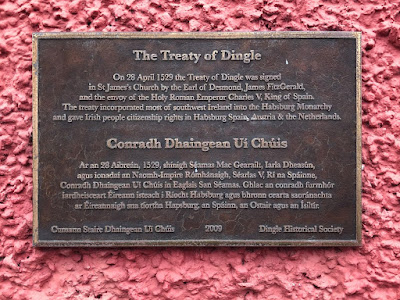 The Treaty of Dingle was signed at Saint James’ Church on 28 April 1529 (Photograph: Patrick Comerford, 2021)

When George Clifford, 3rd Earl of Cumberland, came ashore in Ventry in 1589, on his way to the Azores, he went to church in Dingle.

He recalled his experiences: ‘They have the same form of common prayer word for word that we have only that it is in Latin. On Sunday the Sovereign goeth to Church having his Sergeant before him and accompanied by the Sherriff and others of the town. They then kneel down everyone making his prayers privately by himself; they then rise up and goe out of the church again, to drink. After this they return again to church and the Minister makes prayers. Their manner of baptising differs somewhat from ours, part of the Service belonging to it being put in Latin and part in Irish. The Minister takes the child in his hands, dipping it first backwards and then forwards over head and ears in the cold water even in the midst of winter. They had neither bell, drum or trumpet to call the parishioners together.’

The only strong indication that the church had an early dedication to Saint James is found in James I’s charter to the town in 1605, saying the sovereign or mayor of Dingle was to be elected yearly on Saint James’s Day.

James I’s charter for Tralee in 1612 specifies ‘The provost to be elected annually … on Saint John’s Day.’ There is a strong case for presuming that, as the churches in these two towns are found to be dedicated to Saint James and Saint John, the feast days were chosen for these elections. 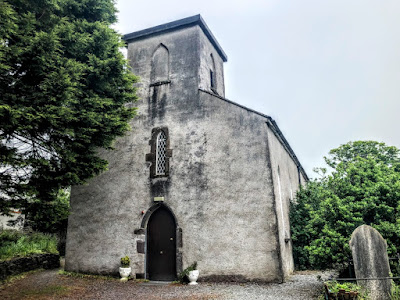 Over the years, most of the original church became a ruin, apart from Saint Mary’s side chapel which was kept in repair for divine service.

A wall plaque in this chapel, consisting of a black marble tablet with a Latin inscription in gold letters, commemorates Sir John FitzGerald, 15th Knight of Kerry, who died in 1741.

The present church, incorporating Saint Mary’s Chapel, was built in 1807 through a gift of £1,100 from the Board of First Fruits.

In his Topographical Dictionary in 1837, Samuel Lewis writes: ‘The old church, which was dedicated to St James, is said to have been built by the Spaniards; it was originally a very large structure. A part of it called St. Mary’s Chapel, was kept in repair until the erection of the present parish church, on the site of the ancient edifice, in 1807: the latter was built by a gift of £1,100 from the late Board of First Fruits; it is a plain structure, and, having become too small for the increasing congregation, is about to be enlarged and thoroughly repaired; for which purpose a grant of £317.17.4 has been recently made by the Ecclesiastical Board.’

These enlargements and repairs were carried out in 1840. At the time, the living was in the patronage of Lord Ventry. 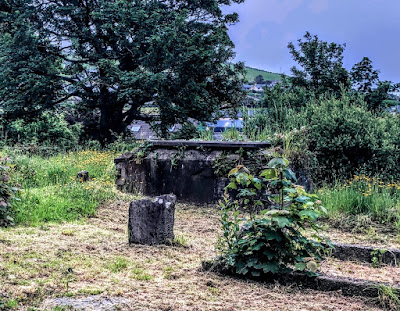 The surrounding churchyard has many tombstones of interest (Photograph: Patrick Comerford, 2021)

The surrounding churchyard includes many tombstones of interest. They include the burial place of one of the FitzGeralds: broken and weather-worn, it bears the date 1504, and an almost obliterated carving of the Desmond arms. The inscription around the margins is in an abbreviated form of mixed Latin and Irish.

The last resident Rector of Dingle was the Revd Francis Joseph Roycroft (1935-1944).

The church was extensively renovated and altered in 1974, and the tower, which was in a precarious condition, was demolished. The church was reopened on 12 July 1974 by President Erskine Childers, with a joint blessing was by Bishop Donald Caird and Bishop Eamonn Casey. At the time, the Revd Trevor Sullivan was the priest in charge of the parish.

Dingle has been part of the Tralee Group of parishes since 1994, and the present Rector is Canon Jim Stephens. 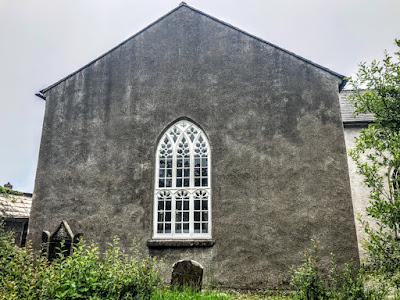 The Georgian Society funded the repair and restoration of the church’s ten lancet windows, including the elaborate chancel window with timber tracery, in 2004. In recent years, the church adapted for concerts, lectures, and special events.

Weekly Sunday services continue, but Saint James’ is also a venue for folk concerts featuring local musicians, and plays a prominent part in many Dingle Festivals and events during the year. One of these concerts was recorded in the ‘Other Voices’ music series by RTÉ.

The Friends of Saint James’ Dingle was set up in 2019 to raise funds to preserve this church and to enhance and secure its use in the 21st century as a shared cultural and spiritual space and a valuable community resource. 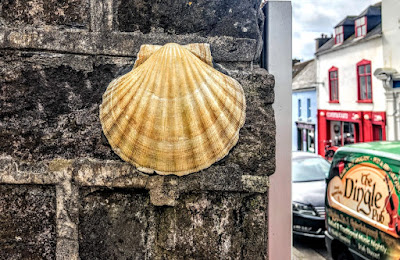 The pilgrim shell … a reminder at the church gates of links with the Camino and Santiago de Compostela (Photograph: Patrick Comerford, 2021)