Lighthouses and lace … once
the lot of the nuns in Youghal 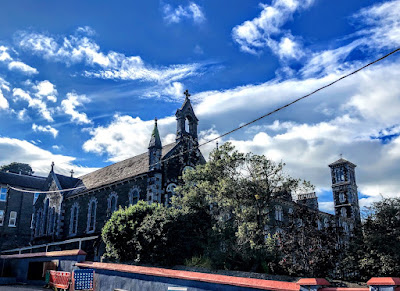 The former Presentation Convent and Chapel in Youghal, Co Cork … is this work of Ashlin architecture in danger of being lost? (Photograph: Patrick Comerford, 2021)

Lighthouse-keeping and lace making seem o have been the lot of nuns in Youghal, Co Cork, for centuries.

The former Presentation Convent in Youghal was known for the word-famous Youghal Lace, once sought after by popes, queens, and all who valued exquisitely crafted garments without worrying about the price.

Wedding gowns and christening robes that were made of Youghal Lace would become family heirlooms.

The Convent Lace School was opened in 1852 by Mother Mary Ann Smith of the Presentation Convent and the world-famous Youghal Lace was made here.

The production of Youghal Lace grew out of the need to create employment in the area during the potato famine in the later 1840s.

When a piece of lace of Italian origin came into the hands of Mother Mary Ann Smith of the Presentation Convent in Youghal, she carefully unravelled the piece of lace, examined how it had been made, and then mastered the stitches.

Mother Mary Ann Smith then taught what she had learned to children in the convent who had shown an aptitude for needlework. This lace is made entirely by the needle, and the thread used is of very fine cotton.

The Convent Lace School opened in 1852 and flourished. In 1863 A shawl of Youghal Lace was presented in 1852 to the Princess of Wales, later Queen Alexander, when she married the future King Edward VII. It was the first of many presentations of Youghal Lace to the British royal family.

Youghal Lace was awarded several medals at in prestigious international exhibitions, including the Vatican Exhibition (1888), the Chicago World’s Fair (1893), the RDS, and the Exhibition of British Lace, London (1906).

The convent closed in the early 1990s, and the nuns’ coffins were reburied in the North Abbey Cemetery. A statue of the Virgin Mary once stood on a plinth on the Bell Tower overlooking the grounds and the nuns’ graveyard. The empty plinth can still be seen in the bell tower.

The building was refurbished and adapted as the Youghal International College, a Spanish second-level school, in 1992. But the building is closed and fenced off again, although it has been declared a National Monument. 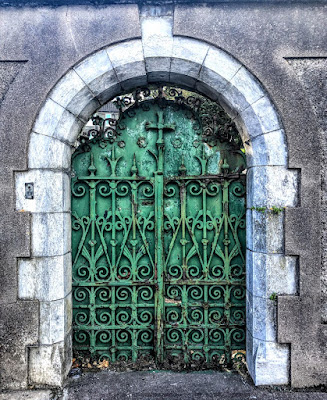 The convent chapel designed by AWN Pugin’s son-in-law, the Cork-born architect George Coppinger Ashlin (1837-1921), as part of the convent complex, with the former convent to the north, sharing a decorative scheme and architectural style.

The chapel, in a mixture of Romanesque and Gothic styles, is typical of churches of its type and time, with features such as the round-headed windows, a bellcote, and steeply-pitched roofs and gables. The variety of materials used in building it add decorative emphasis to the façade and textural variety to the streetscape.

The gable-fronted chapel was built ca 1880, with slightly projecting gabled transepts, four-bay nave elevations, a gabled single-bay single-storey porch at the south side and a gabled bellcote and carved limestone pinnacles at the end.

The chapel is part of a group that forms an imposing and unusual feature on the streetscape of the town. The attached former convent, built at the same time, is a ten-bay, three-storey block with advanced end bays, a gable-fronted, single-bay, single-storey porch at the front elevation and a six-stage, square-profile tower at the north.

I hope this important Ashlin chapel, now vacant on a prominent site, is not facing the same fate as the one that has befallen the former Chapel and Mercy Convent in Skibbereen in West Cork, abandoned to the elements after a fire some months ago, to fall into disrepair and decay. The convent and chapel in Skibbereen were designed in the 1860s by Pugin and Ashlin, and the neglected convent chapels in these two towns – one in East Cork, the other in West Cork – have been parts of architecturally significant ecclesiastical complexes. 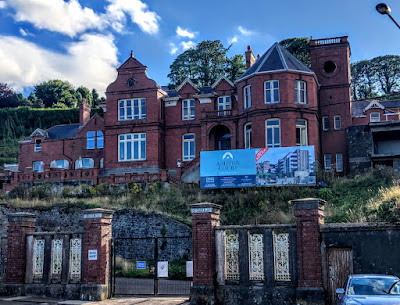 The former Loreto Convent is being transformed into a modern apartment complex (Photograph: Patrick Comerford, 2021)

Further south on the same road in Youghal, the former Loreto Convent campus has been on the market in recent years and is now being converted into apartments in a new development known as Ashton Court.

This site includes the former Loreto Convent and Secondary School, Marymount House, halls and outbuildings on about 4.2 acres of mature grounds on elevated site, with sea views over Youghal bay with its sandy beaches and panoramic views of the River Blackwater.

The former convent is an imposing, red-brick, two-storey over basement building. It was built ca 1850, and was originally known as Ashton Court. It later included a library, conservatory, and first-floor oratory. The former chapel had been converted into a community room.

The former school buildings were extended in mid-1970s, and refurbished and extended in 1991. The school closed in 2006, leaving the site to slowly fall into disrepair.

Naas-based Redbarn Construction Ltd bought the listed property as part of an immediate €6 million investment that also includes restoring a local cinema and an unfinished housing estate. The Loreto site plan envisages about 40 apartments in a gated development, some with access from Golf Links Road. The plans also envisage turning a small cottage close into a coffee shop and newsagents. 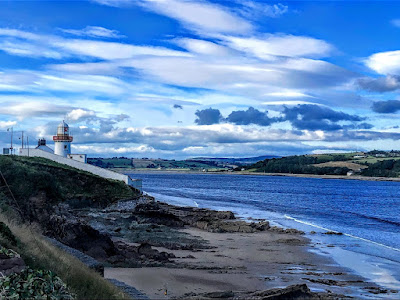 There has been a lighthouse overlooking the Blackwater estuary since the late 12th century (Photograph: Patrick Comerford, 2021)

The two former convents are immediately north of Youghal Lighthouse. It stands on the site of the first lighthouse in Youghal, built there over 800 years ago by Maurice FitzGerald (1194-1257). It is interesting, therefore, that this first lighthouse was maintained by the nuns of Saint Anne’s Convent for centuries.

That first lighthouse fell into disrepair after the nuns’ community was dissolved during the Tudor Reformation.

Capel Island was then chosen, and building work started in the late 1840s. But local opinion changed, a new location was sought, and the half-built lighthouse on Capel Island was abandoned.

Finally, a new lighthouse opened in 1852 – in the same place where the nuns had run one from the 12th century. The half-built lighthouse on Capel Island can still be seen, and the entire island is now a bird sanctuary.

The last lighthouse attendant in Youghal moved out in 1996. Since then, the lighthouse has been fully automated and is now run from Dublin. 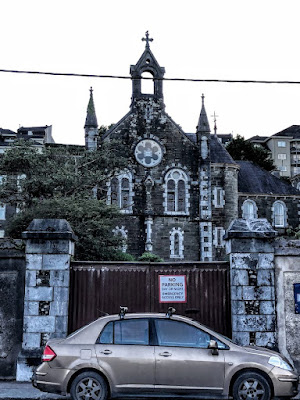 ‘No Parking, Day or Night. Emergency Access Only’ … the gate in front of the former Presentation Convent Chapel in Youghal (Photograph: Patrick Comerford, 2021)