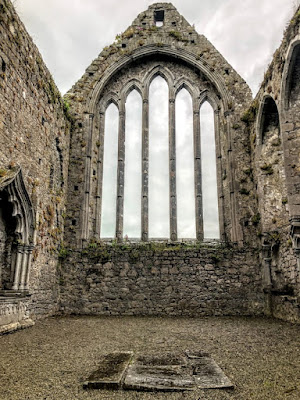 When the last White Knight died in 1608, he was buried in the choir of the Dominican Priory in Kilmallock, Co Limerick (Photograph: Patrick Comerford, 2021)

I recently joined an afternoon walking tour of the churches, castles and mediaeval walls of Kilmallock in Co Limerick. The mediaeval ruins of Kilmallock are so extensive that it has been described as ‘the Baalbek of Ireland.’

In the centre of the choir of the ruined Dominican priory church, I was pointed to the grave of Edmund Fitzgibbon, the last ‘White Knight,’ who died in 1608.

Edmund Fitzgibbon was the head of a branch of the FitzGerald dynasty and was known as the 11th White Knight. During his lifetime he fell in and out of favour with the Crown.

When the White Knight died at Castletown, Co Limerick, on 23 April 1608, he was buried in the choir of Saint Saviour’s Dominican Priory in Kilmallock. The top of his tomb is broken in two and there is a small hollow in the tomb, caused by dripping water.

The title of White Knight was one of three mediaeval hereditary knighthoods in branches of the FitzGerald family. The title was first conferred upon Maurice Fitzgibbon in the early 14th century.

The grave of the last White Knight and his son in Kilmallock Priory (Photograph: Patrick Comerford, 2021)

The first White Knight, Maurice FitzGibbon, was knighted in the field by Edward III in 1333, immediately after the defeat of Scottish forces at the Battle of Halidon Hill. The family of the White Knight was regarded as the second branch of the FitzGerald dynasty, after the Earls of Desmond.

After Edmund Fitzgibbon, the 11th White Knight, died in 1608, his estates passed to his daughter Margery, contrary to the rules of descent in Ireland at the time. The male heir was David Fitzgibbon of Kilmore, but Edmund Fitzgibbon had made a special arrangement with the government as one of the conditions for capturing his kinsman, James FitzThomas FitzGerald, 16th Earl of Desmond, during the Desmond rebellion.

Much of Fitzgibbon’s military and political conduct was driven by his desire to recover his family’s properties in Munster. But he was regularly outwitted and betrayed by government officials. When he was arrested in 1587, Sir Anthony St Leger advised he should be made ‘shorter by the length of his head.’

Fitzgibbon became sheriff of Co Cork in 1596, and in this role he attacked and almost destroyed Saint Carthage’s Cathedral in Lismore, Co Waterford.

Doubts about his loyalty were raised at the height of the Desmond Rebellion, when he failed to capture the Súgan Earl of Desmond, James FitzThomas FitzGerald, as he passed through Fitzgibbon’s territory in May 1601.

The ‘Sugan’ Earl had gathered an 8,000-strong force and engaged in a three-year struggle. He took Desmond Hall and Castle in Newcastle West in 1598, but lost them the following year. In 1599, the Earl of Essex also brought to an end the 147-day siege of Askeaton Castle by the ‘Sugan’ Earl. After escaping from Kilmallock, he was finally captured by Fitzgibbon on 29 May 1601 while he was hiding in the caves near Mitchelstown.

FitzGerald was placed in irons and taken to Shandon Castle, where he was found guilty of treason. He was then brought to England, and he was made a prisoner in the Tower of London. Historians suggest he died sometime in 1608, and was buried in the chapel of the Tower.

His younger brother, John FitzThomas FitzGerald, fled to Spain in 1603 with his wife, a daughter of Richard Comerford of Danganmore, Co Kilkenny. In Spain, he was known as the Conde de Desmond, and he died a few years later in Barcelona, probably after 1615.

Meanwhile, Edmund Fitzgibbon was rewarded by the crown and parliament with the full restoration of his lands and title. Fitzgibbon was jailed in 1606 on suspicion of disloyalty, but was released when he promised to fight for the Crown.

King James I made him Baron of Clangibbon, but he died at Castletown, Co Limerick, on 23 April 1608, without statutory confirmation of his lands and titles. He died the day after the death of his son Maurice, and the two were buried together in the choir of the Dominican Priory church in Kilmallock. 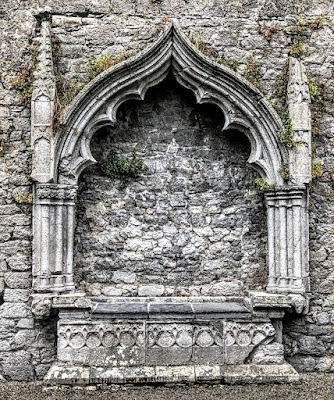 A mediaeval monument in Kilmallock thought to mark the grave of an earlier White Knight (Photograph: Patrick Comerford, 2021)

George King (1771-1831), 3rd Earl of Kingston, tried to claim the title of the White Knight in 1821. He claimed the title through descent from Margaret (1602-1666), the granddaughter of Edmond Fitzgibbon, the 11th White Knight. But his claim was successfully contested and was refused by the crown.

Richard Comerford ‘fitzThomas’ (1564-1637) was 24 when he inherited Ballybur Castle and other family estates in Co Kilkenny, following the death of father, Thomas Comerford, in 1589. He was also a first cousin of the Comerford from Danganmore who married the Sugan Earl’s younger brother, John FitzThomas FitzGerald, and fled into exile in Spain.

This Richard Comerford is reputed to be the builder of Ballybur Castle. In October 1601, he was a Justice of the Queen’s Bench, then the highest court in Ireland. He was also one of the figures involved in securing the title to of the Earls of Ormond to large tracts of land in Co Mayo, including Achill Island and Burrishoole.

Richard was married twice. His first wife, Joanna Sweetman, was the daughter of John Sweetman of Castle Eve, Co Kilkenny. They had no children, and Richard’s second wife Mary was a daughter of Thomas Purcell of Loughmoe and Crannagh Castle, Co Tipperary.

Richard and Mary Comerford were the parents of three sons and 11 daughters. Their eldest surviving son, John Comerford (1598-1667), who inherited Ballybur and the other family estates, and was the director ancestor of the Comerford family of Bunclody, Co Wexford.

The youngest surviving daughter of Richard and Mary Comerford, Ellen, married Theobald Butler of Rouskagh, Co Tipperary, and of Enniscorthy, Co Wexford, in 1640. Their children included a daughter Joanna who married David FitzGibbon, who was the Governor of Ardfinnan Castle, Co Tipperary, when Cromwell besieged Clonmel.

Joanna and David FitzGibbon were the direct ancestors of Maurice FitzGibbon (1818-1881), of Crohana, near Stoneyford, Co Kilkenny. He was born in Kilworth, Co Cork, and in 1858 he assumed the title of the White Knight.

The remains of the cloisters in Kilmallock Priory (Photograph: Patrick Comerford, 2021)

Excellent article, many thanks for posting.

Excellent article, many thanks for posting