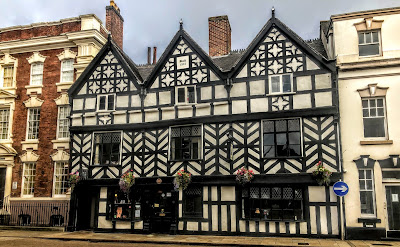 The Tudor of Lichfield or Lichfield House on Bore Street … a visible reminder of a rich heritage (Photograph: Patrick Comerford, 2021)

The Tudor of Lichfield or Lichfield House on Bore Street, the black-and white timber framed buildings on Quonians Lane, and the many timber-framed buildings in Vicars’ Close are the most visible reminders of the rich heritage of Tudor architecture in Lichfield.

When it comes to architectural heritage, Lichfield may be better known for its cathedral and churches and for its Georgian buildings. But last week I only had to look at the backs of buildings on Market Street and Breadmarket Street to realise the large amount of 16th and 17th century architecture that probably survives in Lichfield.

The Tudor of Lichfield, or Lichfield House, is a Grade 2* listed black and white timber framed building, dating back to 1510 and the reign of Henry VIII.

Lichfield House is the oldest and longest serving coffee shop and restaurant in Lichfield and also sells luxury made chocolates, jams, marmalades, honey and biscuits.

Lichfield House, the picturesque black and white half-timbered residence was built when Henry VIII was king and still married to Catherine of Aragon ruled England, and before the little Cathedral town which was granted the status of City and County in 1553.

The house has been added to from time to time, but the main building is the original, including the two man reception rooms and the oak staircase that runs through the house.

During the Civil War, this was a prison for captured soldiers during the three sieges of Lichfield, some of whom left their signatures. In the concealed ‘Priests’ Hide’ on the top floor, two crosses have been scratched on the door. It is said an underground passage runs from the cellars of the house to the Cathedral – probably dug out by one side or the other during the Civil War.

Wilfred and Evelyn Burns-Mace and their son Jeffrey opened the Tudor Café in 1936. A restoration programme in 1975 secured the old Tudor building again. This restoration took many months and earned a European Heritage Award. 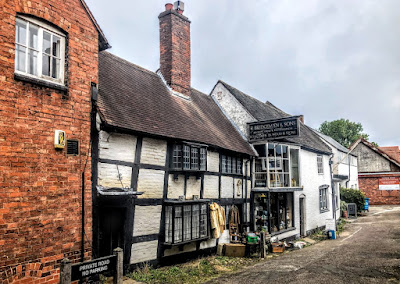 Another much-photographed Tudor corner of Lichfield is Quonians Lane, to the east of Dam Street. The lane is mentioned in the 1325 Book of Dean and Chapter Possessions, when it was said to lead to a well. This may have been a pilgrims’ path from the city to the Well of Saint Chad at Stowe.

The buildings on the left-hand side of Quonians Lane in my photographs date from the 16th century. The best-known building, now an antiques shop, still retains the sign of R Bridgeman and Sons, the stonemasons’ firm that had been in Lichfield since the 1860s that worked on the cathedral and many other churches.

Samuel Johnson went to school at Dame Oliver’s School on the corner of Dame Street and Quonians Lane. 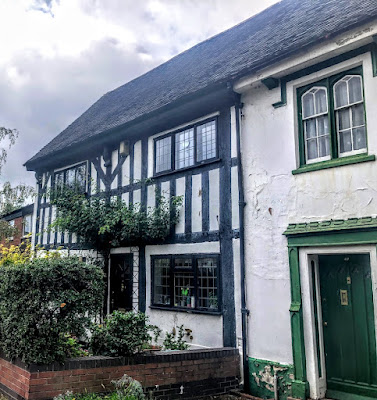 No 45 and No 47 Stowe Street form a pair of Tudor timber-frame and brick houses (Photograph: Patrick Comerford, 2021)

Two houses on Stowe Street, No 45 and No 47, and the neighbouring Cruck House, stand out from the surrounding 20th century housing developments in an area south of Stowe Pool and immediately east of the heart of Lichfield’s city centre and main shopping streets.

These semi-detached houses were probably built in the late 16th or early 17th century, and have early 19th century alterations.

They form a pair of Tudor timber-frame and brick houses. The timber-frame and brick work on No 47 is covered in stucco work, but despite this alteration to the outside appearance, the houses are best described as one unit. They have a shared tile roof with brick stacks, are two storeys high and form a single four-window range.

The left half, known as Tudor Cottage, has a pretty flower garden in front. I believe that inside the houses the timber framing is exposed and there is a large fireplace. 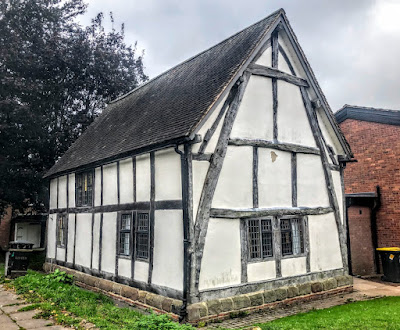 Nearby, Cruck House at 71 Stowe Street is a restored Grade II* timber-framed mediaeval cottage. It is an impressive sight on Stowe Street in the midst of modern residential and commercial buildings. Yet, despite first impressions, this is a surprisingly small building.

Many of the old buildings in Stowe Street were pulled down in the mid-1950s. During the demolition work, the Cruck House was revealed within the outer cladding of a building whose outer walls had obscured the framework supporting it. Whoever spotted the house during the demolition process and called a halt had saved a rare building dating back to the late 14th or early 15th century.

There were other examples of cruck-style buildings in Lichfield in the past. When an old pub was being demolished on the corner of Frog Lane and Saint John Street, cruck beams were visible in the party wall between the old pub and the building immediately to the north of it. It was swiftly demolished and removed, although not before the pieces were photographed before they were removed. 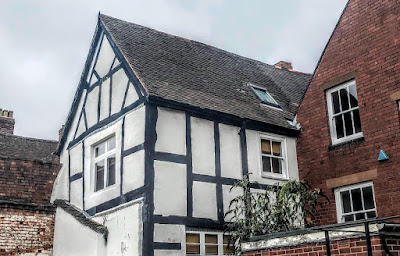 Back on Bore Street, I walked into a laneway beside Barclay’s Bank and could see the timber-framed structures of the buildings on Breadmarket Street, probable evidence that these were built in the late Tudor period, and the Georgian façades on the street front may merely hide wonders and treasures inside.

Further west along the north side of Bore Street, a steep laneway leads into a private car park. But here too are the visible signs of a timber-framed Tudor house that may just be a sample of the many Tudor-era houses that survive behind the façades on the south side of Market Street.

I need to explore a little more of Tudor Lichfield when I am back again, hopefully sooner rather than later. 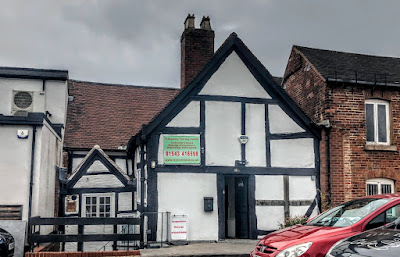 Parts of a Tudor house can be seen in a car park between Bore Street and Market Street (Photograph: Patrick Comerford, 2021)