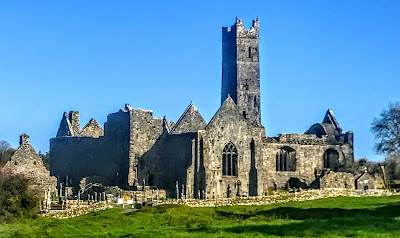 The Franciscan abbey at Quin, Co Clare, is one of the most intact mediaeval Franciscan friaries in Ireland (Photograph: Patrick Comerford)

The three-day annual clergy conference for priests of the Diocese of Limerick and Killaloe and the Diocese of Tuam, Killala and Achonry comes to an end today in Adare, Co Limerick.

My theme for these few weeks is churches in the Franciscan (and Capuchin) tradition. My photographs this morning (20 October 2021) are of the ruins of the Franciscan ruins at Quin Abbey, outside Ennis, Co Clare. 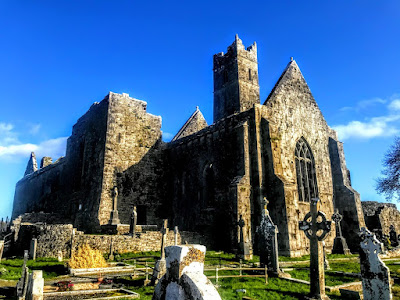 Quin Abbey occupies the site of the Anglo-Norman de Clare fortress built in 1278-1281 and destroyed in 1318 (Photograph: Patrick Comerford)

The Franciscan abbey at Quin, Co Clare, is about 14 km from Ennis, Co Clare. Despite its suppression and repeated attacks in the 16th and 17th centuries, substantial remains of the friary survive, making it one of the most intact mediaeval Franciscan friaries in Ireland.

Quin Abbey occupies the site of the Anglo-Norman de Clare fortress that was built in 1278-1281 and destroyed in 1318. An earlier monastery on the site was burned down in 1278.

Thomas de Clare (1245-1287), a powerful Anglo-Norman lord, began building a castle at Quin in 1278. At the time, de Clare was seeking to secure his position in the Kingdom of Thomond as the local O’Brien lords were distracted by internal feuding. One hypothesis says de Clare gave his name to Co Clare. Quin Castle was completed in 1281 when the Justiciar of Ireland, Robert of Ufford, marched into Thomond to curb de Clare’s regional dominance.

Richard de Clare (1281-1318) was defeated at the battle of Dysert O’Dea in Co Clare in 1318 by the O’Brien kings of Thomond and their allies, and the O’Briens regained control over Thomond.

The castle was a ruin by 1350, when it was rebuilt as a church by the MacNamara clan, using the south curtain wall of the old castle. Quin Abbey, properly a friary, was subsequently built between 1402 and 1433 by Sioda Cam MacNamara, for two Franciscan friars, named Purcell and Mooney.

The Franciscan chronicler Donatus Mooney records that friary was founded in 1402 by Síoda Cam MacNamara, lord of Clancullen, as his family burial place. The MacNamara tomb survives to this day.

Pope Eugene IV gave Síoda Cam MacNamara’s son, Maccon MacNamara, permission in 1433 to introduce Regular Observance at Quin, although this did not happen for another two centuries.

When the abbey was suppressed at the Reformation in 1541, it passed to Conor O’Brien, Earl of Thomond. After the dissolution, the friars continued to live in Quin under the protection of the Earls of Thomond.

When Sir John Perrot, Lord Deputy of Ireland, arrived in Quin during the Desmond rebellion in 1584, he found the Franciscans still living here. The friary was burnt during an attack, but the MacNamaras regained control of the site ca 1590, and once again set about repairing and restoring it.

Although the friars were forced to leave on a number of occasions in the 17th century, they continued to return to Quin, and the community was reconstituted as Observant Franciscans in 1612.

The building became a college ca 1640, according to local lore, and had up to 800 students. Oliver Cromwell arrived only 10 years later, when the friars were murdered and the friary was destroyed.

After the Caroline restoration (1660), members of the O’Brien family continued to make bequests to the friars of Quin. The building was once again restored in 1671, although the friary never regained its former status.

The friars were expelled again in 1760, but the last friar, Father John Hogan, continued to live here until he died in 1820. He was buried in the east cloister walk. But, by then, the buildings were ruined by neglect.

Although the abbey is mostly roofless, it is relatively well preserved. The foundations of the three corner towers and curtain wall of the castle built by Thomas de Clare can still be seen, surviving to varying degrees. There is an intact cloister, and many other surviving architectural features make the friary of significant historical value.

The mediaeval stone high altar remains in its original position, and to the right of this are the rare remains of an early 17th century stucco crucifixion, on the wall above a tomb. The intimate cloister, the chapter room, kitchen, refectory and dormitories stand almost as they did at the time of the dissolution. The fact that the domestic ranges were not bonded together suggests that they were built over a long period of time, rather than as one continuous building programme.

There is a visitor centre near the building, there is a permanent caretaker at the site, and the graveyard surrounding the friary is still in use. The deserted village associated with the friary is now marked by grassy mounds. 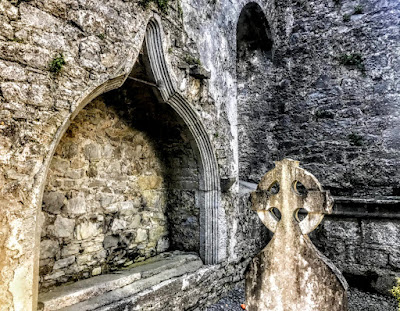 The friary was founded in 1402 by Síoda Cam MacNamara, lord of Clancullen, as his family burial place (Photograph: Patrick Comerford)

39 ‘But know this: if the owner of the house had known at what hour the thief was coming, he would not have let his house be broken into. 40 You also must be ready, for the Son of Man is coming at an unexpected hour.’ 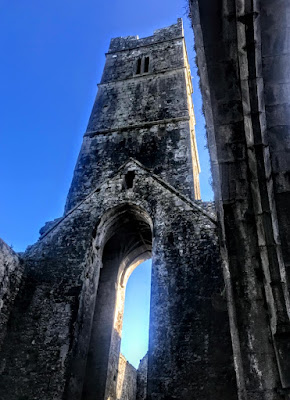 When the abbey was suppressed at the Reformation in 1541, it passed to Conor O’Brien, Earl of Thomond (Photograph: Patrick Comerford)

The Prayer in the USPG Prayer Diary today (20 October 2021) invites us to pray:

We pray for just transitions from the use of fossil fuels to renewable energy, minimising the economic impact of these changes. 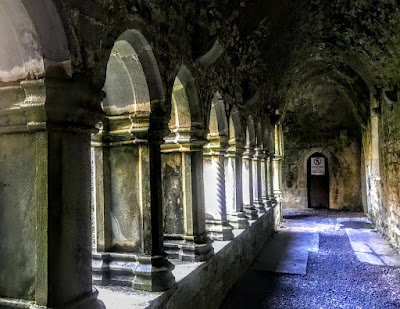 The cloisters stand almost as they did at the dissolution (Photograph: Patrick Comerford)