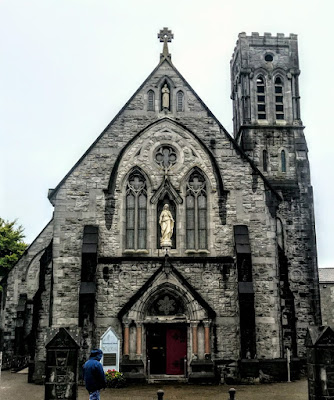 I returned from Lichfield late last night after a three-day break this week, staying at the Hedgehog Vintage Inn on Stafford Road, enjoying walks in the countryside, following the daily cycle of prayer in Lichfield Cathedral, meeting some old friends, and finding some ‘down time.’

I am on my way back to Askeaton, Co Limerick, later today. But, before the day begins, I am taking a little time this morning for prayer, reflection and reading. Each morning in the time in the Church Calendar known as Ordinary Time, I am reflecting in these ways:

My theme for these few weeks is churches in the Franciscan (and Capuchin) tradition. My photographs this morning (14 October 2021) are from Saint Mary’s, the Friary Church in Ennis, Co Clare. 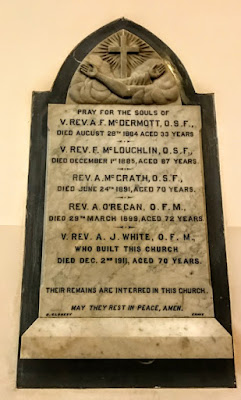 A plaque in the church remembers past members of the Franciscan community in Ennis (Photograph: Patrick Comerford)

The Franciscan Provincial threatened to close the friary in Ennis in 1853 unless conditions were improved. The Franciscan community in Ennis responded by buying the present site at Willow Bank House on Francis Street and in 1854 Patrick Sexton designed a new chapel.

Carroll designed the new friary church in Ennis in the 14th-century Gothic style, with a nave, apse, two side chapels and a tower. The altar was designed by the Dublin-based monumental sculptor, James Pearse (1839-1900), father of the 1916 leader, Padraic Pearse (1879-1916). 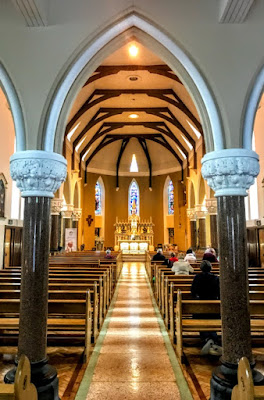 Inside the church designed by William Reginald Carroll in the 14th-century Gothic style (Photograph: Patrick Comerford)

[Jesus said:] 47 ‘Woe to you! For you build the tombs of the prophets whom your ancestors killed. 48 So you are witnesses and approve of the deeds of your ancestors; for they killed them, and you build their tombs. 49Therefore also the Wisdom of God said, “I will send them prophets and apostles, some of whom they will kill and persecute”, 50 so that this generation may be charged with the blood of all the prophets shed since the foundation of the world, 51 from the blood of Abel to the blood of Zechariah, who perished between the altar and the sanctuary. Yes, I tell you, it will be charged against this generation. 52 Woe to you lawyers! For you have taken away the key of knowledge; you did not enter yourselves, and you hindered those who were entering.’ 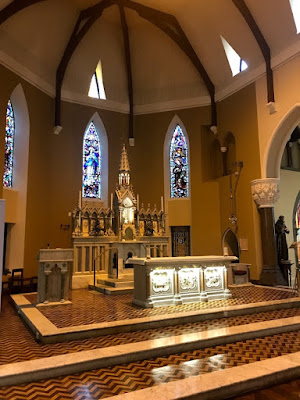 The Prayer in the USPG Prayer Diary today (14 October 2021) invites us to pray:

Let us pray for the Church of South India’s Focus 9/99 programme, centring children in the life of the Church. 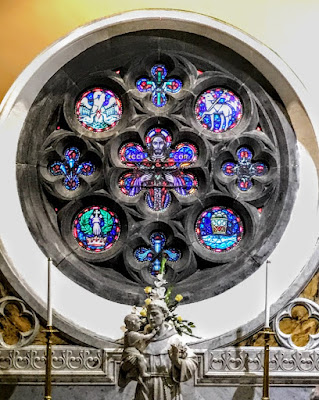 A rose window in a side transept (Photograph: Patrick Comerford)