Could an open Nazi have
distorted and betrayed
how we read the Bible? 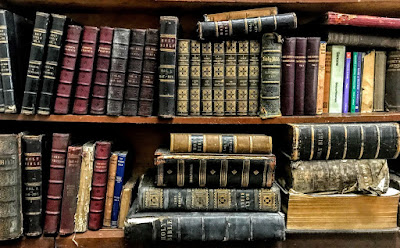 I have long argued that theology students need to have the language skills necessary to read the Bible in its own original languages, especially Hebrew and Greek.

To read the Bible in our own languages only, in our case English, vests a vast amount of trust and confidence in the committees engaged in translating any particular version of the Bible.

To accept a translating committee’s version of Biblical text alone, without ever questioning or challenging it, bestows on the committee members a level of doctrinal finality and infallibility that has never been found in any curia in the Vatican.

Every translation of the Bible is an interpretation as well as a translation, and the new text always betrays the old prejudices of the translators. The Irish-born historian Professor Eamon Duffy of Cambridge finds the English Standard Version (ESV) reflects ‘a deep-rooted dimension of Anglophone culture,’ and the Jerusalem Bible ‘woefully flat-footed.’

In a debate in the letters pages of The Tablet, Sarah Parvis of the University of Edinburgh described the ESV as a ‘low-church evangelical Protestant translation.’ Neil Xavier O’Donoghue of Saint Patrick’s College, Maynooth, conceded that the ESV ‘was produced by conservative Evangelical scholars in the United States and is often described as Calvinist in philosophy.’

In fact, the ESV is deeply ‘fundamentalist,’ unnecessarily imposing the translators’ extreme ‘conservative evangelical’ views and dogmas on the text and on the reader. The ESV’s general editor, Wayne Grudem, argued in paper published in 2016 ‘Why Voting for Donald Trump Is a Morally Good Choice.’

But, even when we learn to read Biblical texts in Hebrew or Greek, our interpretations of those texts depend on the dictionaries and commentaries we use to guide us through those texts.

For example, Gerhard Kittel’s Theological Dictionary of the New Testament is a 10-volume monumental reference work, a translation of his famous Theologisches Wörterbuch zum Neuen Testament. It is known commonly as ‘Kittel’ and has long been considered by many scholars to be the best New Testament dictionary ever compiled. The popular condensation of Kittel’s TDNT is commonly known as the ‘Little Kittel’.

Kittel treats of more than 2,300 theologically significant New Testament words, including the more important prepositions and numbers as well as many proper names from the Hebrew Scriptures. Presenting the words in the order of the Greek alphabet, Kittel’s TDNT typically discusses each word in the context of its secular Greek background, its role in the Old Testament, its use in extra-biblical Jewish literature, and its varied uses in the New Testament.

Gerhard Kittel (1888-1948) was Professor of New Testament at Greifswald and Tübingen, and a Lutheran pastor. But now his place in Biblical scholarship is being challenged, for Kittel was also an enthusiastic supporter of the Nazis and an open antisemite.

In an open letter published in last weekend’s edition of the Church Times (29 October 2021), Binyomin Gilbert, Programme Manager, and Bernard Glick, Outreach and Education Officer of the Campaign Against Antisemitism, have challenged teaching institutions in the Church of England that have Kittel’s Theological Dictionary of the New Testament ‘on their shelves without any warning about its context and content.’

In their letter, they say, ‘Gerhard Kittel and some of Kittel’s earlier contributors were committed Nazis, who contrived content to support the Nazi ideology.’

Kittel joined the Nazi Party in May 1933, and called the party ‘a völkisch renewal movement on a Christian, moral foundation.’

As Professor of Evangelical Theology and New Testament at the University of Tübingen, he published studies depicting the Jewish people as the historical enemy of Germany, Christianity and European culture in general. In a lecture in June 1933, Die Judenfrage (‘The Jewish Question’), he spoke for stripping citizenship from German Jews, removing them from medicine, law, teaching, and journalism, and to forbid marriage or sexual relations with non-Jews. All this was two years before the Nazis introduced the Nuremberg Racial Laws and took away Jewish rights of German citizenship in 1935.

He tried to distinguish his work from the ‘vulgar antisemitism of Nazi propaganda,’ and said his work as an ‘attempt to grapple with the problem of Jewry and the Jewish question,’ and claimed he was trying was to combat the myths and distortions of extremist members of the Nazi Party. He defended his work on the ‘Jewish Question,’ saying it was not based on the racial theories of Nazism but upon theology.

After the fall of the Third Reich, Kittel was arrested on 3 May 1945 by French forces, was removed from office and held in Balingen. He was released in 1946, pending his trial, but was forbidden to enter Tübingen until 1948, and from 1946 to 1948 he was a pastor in Beuron. He was allowed back into Tübingen in 1948, but died on 11 July 1948 year before his trial resumed.

The American Biblical scholar and archaeologist William F Albright (1891-1971) once wrote, ‘In view of the terrible viciousness of his attacks on Judaism and the Jews, which continues at least until 1943, Gerhard Kittel must bear the guilt of having contributed more, perhaps, than any other Christian theologian to the mass murder of Jews by Nazis.’

In their letter to the Church Times, Binyomin Gilbert and Bernard Glick point out the Campaign Against Antisemitism (CAA) recently wrote to several theological teaching institutions, asking them to place content alerts in their copy of Kittel. At the time of writing their letter, however, ‘fewer than a quarter have responded, and only one, Moorlands College, agreed and immediately prepared a notice to be placed in its Kittel.’

They say this practical and considerate gestures are evidence of true commitment to ‘working together for the common good.’ They add, ‘Moorlands College not only heard: it listened — and acted. That small, simple, and yet significant act means much.’

However, they say that other theological colleges that responded ‘claim that, for a variety of reasons, they do not consider it necessary to place such a notice and emphasised that anti-Semitism and other discrimination is not tolerated at their institution.’

They say, ‘We appreciate the words, but a reluctance to act speaks considerably louder.’

They are now asking institutions holding Kittel ‘to place a contextual notice and advise us accordingly.’ They conclude by saying the Campaign Against Antisemitism ‘will praise those institutions that care enough to do the right thing; but we also will not hesitate to publicise those that do not.’ 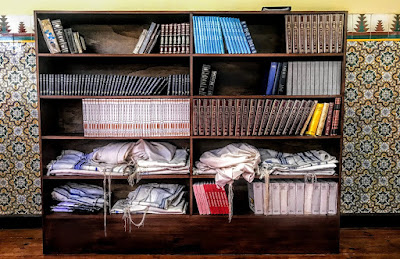 I always recommend reading the Bible in the original texts … bookshelves in the synagogue in Porto (Photograph: Patrick Comerford)