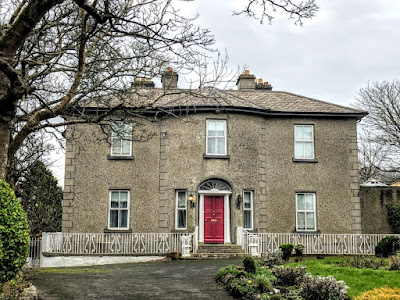 Forster House, on Forster Street, Galway … home to generations of the Blake-Forster family and some members of the Comerford family (Photograph: Patrick Comerford, 2022)

After last week’s search for the Comerford family mausoleum in Drumcreehy Chuchyard, near Ballyvaughan, Co Clare, I went in search yesterday of Forster House on Forster Street, Galway.

This house, close to the coach station, and just a five-minute walk from Eyre Square in the centre of Galway, was home to generations of the Blake-Forster family, who were intermarried with the Comerford, and many of them are buried in the Comerford mausoleum near Ballyaughan.

Francis Blake-Forster seems to have designed Forster House, now known as Forster Street House, built on a prominent position overlooking Lough Atalia. The house, which has been well maintained, is an imposing and attractive house, distinguished by its bowed bays. It has a fine doorway and steps, and with its high-quality entrance gates, makes an impressive contribution to the streetscape on one of the main approaches to the city centre.

Forster House is a detached, three-bay, two-storey house over basement, built ca 1850, with a bowed entrance bay at the front and bowed bays at the south ends of three-bay side elevations.

The house has hipped slate roofs with rendered chimneystacks and rendered eaves with cast-iron and replacement metal rainwater goods. The roughcast rendered walls have raised render quoins at the corners and at the front bowed bay, and there is a rendered plinth.

The square-headed window openings have six-over-six pane timber sliding sash windows at basement. The rest of the house seems to have replacement timber and uPVC windows, with raised render reveals and limestone sills.

The elliptical-headed recessed door opening with moulded render surround, has fluted render columns flanking the timber panelled door and supporting a moulded cornice and a timber-spoked fanlight. The detached sidelights have raised render reveals and a replacement windows.

A square-headed replacement timber door at the rear of the house had a raised render reveal. 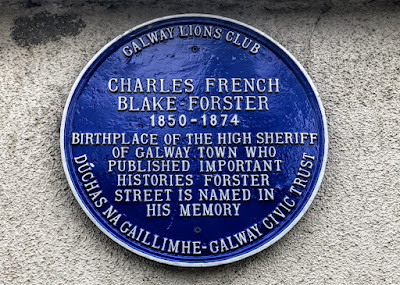 A blue plaque on the wall outside Forster House commemorates Charles French Blake-Forster (1847-1874), the eldest son of Mary Josephine (Comerford) and Francis Blake-Forster, author of The Irish Chieftains, in which he repeated many of the myths of the origins of the Comerford family.

Charles French Blake-Forster was the High Sheriff of Galway when he died at Forster Street on 9 September 1874. He was buried with his parents in Saint James’s Church churchyard, Galway, while his brother, Captain Francis O’Donnellan Blake Forster (1853-1912), is buried in the Comerford mausoleum in Drumcreehy churchyard near Ballyvaughan.

The descendants of the Comerford and Blake Forster family continued to live in Forster House for a number of generations. Mary Josephine’s sister, Henrietta Emily (1837-1881), also lived in Forster House. Henrietta was married twice, first to Isaac Breen Daly (1835-1871), and then, when she was widowed, to John Joseph Ireland.

The Comerford sisters, Mary Josephine and Henrietta, seem to have passed on much of the Comerford family lore to Charles French Blake-Forster when they were living at Forster House. Henrietta’s second husband, John Joseph Ireland, died in Forster House on 16 October 1876, and she died there on 20 April 1881, twice widowed, the mother of 11 children, and still only 43. 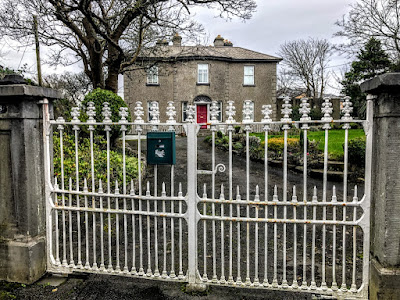 Dear Patrick, I attempted to post at the end of your post, but this showed no comment so I will try again. I see that many towns such as Ballyvaughn, Ballybur and Ballyragget, where my ancestor Peter Comerford was baptized, begin with Bally. Will you please tell me the meaning of Bally? Also in your post about Forster House you use the words plinth and quoins. Please give me a definition of these terms. Thank you, Cheryl Comerford Comer USA