The ruins of Saint Mary’s Church
on Mary’s Lane, one of the finest
mediaeval churches in Wexford 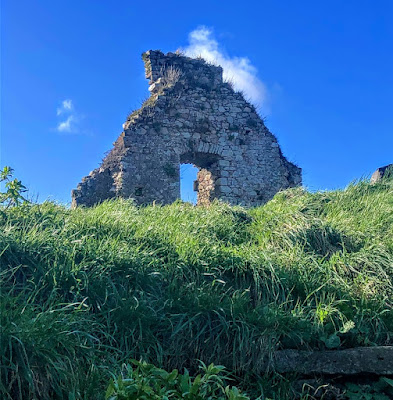 Saint Mary’s Church dates back to 1365 and was one of the finest mediaeval churches in Wexford (Photograph: Patrick Comerford, 2022)

Walking along South Main Street in Wexford last week, I turned up steep, narrow Mann’s Lane, opposite Oyster Lane, and found myself halfway along Mary’s Lane, where it curves in a semi-circle around the walls and ruins of mediaeval Saint Mary’s Church, one of the mediaeval churches within the walls of Wexford Town.

Mary’s Lane is an old and narrow lane in the centre of the town. It runs parallel to South Main Street, stretching from Peter Street to Bride Street. In the past, it was also known as Bride Lane, named after Sain Bridget’s Parish.

Mary’s Lane is named after the old Norse-Irish parish of Saint Mary’s. The entrance to the ruins of Saint Mary’s Church, which was built during the Middle Ages, can be found at the southern end of the lane, close to the entrance at Bride Street. 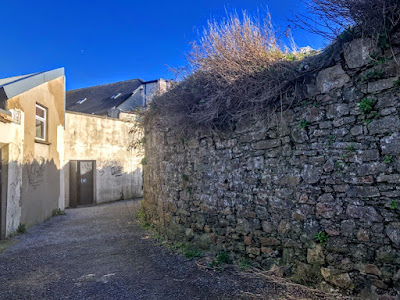 The mediaeval Saint Mary’s parish covered a mere 4.5 ha (11 acres). The parish was bounded by Saint Patrick’s parish to the north, Saint Peter’s and Saint Bridget’s to the west, Saint Doologe’s to the south, and Wexford Harbour to the east.

Peter Street (Gibson Lane) and Cinema Lane (Harpur’s Lane) marked its northern limits, Clifford Street was its western limit, and its southern boundary was at Stone Bridge. South Main Street, from Peter Street to Stone Bridge runs through the centre of this former parish. There is a reference in 1592 to Royal Street in Saint Mary’s Parish, although the street name has not survived.

The first reference to Saint Mary’s Church and its clergy dates from 1365. This is said to have been one of the finest mediaeval churches in Wexford. It resembled Saint Patrick’s Church in design, and though smaller was more beautiful in detail.

Like Saint Patrick’s Church and Selskar Church, Saint Mary’s Church had a double nave. The capitals of the pillars, the mouldings of the arches, the tracery of the widows were more ornamental than those of either Selskar or Saint Patrick’s.

Dr Nicholas French (1604-1678), Roman Catholic Bishop of Ferns (1645-1678), was the last Parish Priest of Saint Mary’s from 1638 until he was driven into exile in 1651. He lived in a large house at the top of Peter Street (Gibson Lane) that was later divided into two houses. The rear of his house is traditionally known as the ‘Bishop’s Garden’ and stretched down to the walls of Saint Mary’s churchyard. 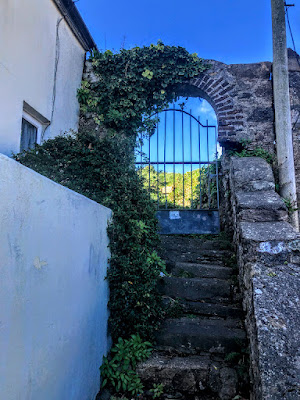 The steps and locked gates leading into the ruins of Saint Mary’s Church (Photograph: Patrick Comerford, 2022)

Saint Mary’s was plundered and destroyed by Cromwellian troops in 1649. French was not living in his house in Peter Street at the time of Cromwell, but was ill in New Ross.

French wrote to the papal nuncio, Cardinal Giovanni Battista Rinuccini, then in Brussels, and in his letter described the attack on the priests, people and church of Saint Mary’s: ‘There before God’s Altar fell many sacred victims, holy priests of the Lord, others who were seized outside the precincts of the Church were scourged with whips; others hanged and others put to death by various cruel tortures.’

He went on the describe the Cromwellian slaughters in Wexford: ‘The best blood of the citizens was shed; the very squares were inundated with it and there was scarcely a house that was not defiled with carnage: and full of wailing.

‘In my own palace, a youth, hardly 16 years of age, an amiable boy, as also my gardener and sacristan, were cruelly butchered, and the chaplain whom I caused to remain behind me at home was transfixed with six mortal wounds. These things were perpetrated in open day by the impious assassins, and from that moment I have never seen my city or my flock or my native land or my kindred.’ 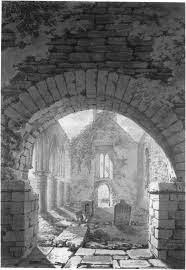 It is said the bell from Saint Mary’s was given to the Church of Ireland parish church in Castlebridge.

A century later, the artist Gabriel Beranger painted the interior of Saint Mary’s Church during his tour of Wicklow and Wexford in 1779-1780. His painting shows the chancel arch of Saint Mary’s and elegant arches with round columns. The artist also recorded a tomb with the effigy of a woman.

The ruined walls of Saint Mary’s continued to stand against wind and weather until 4 June 1822 when they were struck by a thunderbolt in a storm that raged over the town.

Today all that stands is a single wall, a lonely sentinel guarding faithfully the tragic memories of the past. 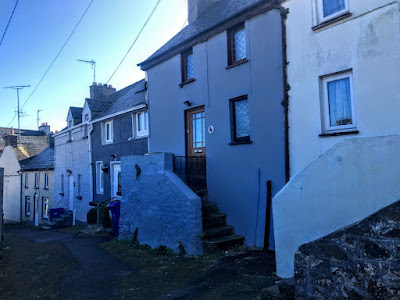 Houses on Mary’s Lane beside the ruins of Saint Mary’s Church … the house with dormer windows was a Mass House during the Penal Law era (Photograph: Patrick Comerford, 2022)

The locked gates of Saint Mary’s Church and churchyard stand at the top of a flight of stone steps. Both ends of Mary’s Lane are occupied by residential properties.

In the 1841 census, Saint Mary’s Parish had a population of 413 people living in 75 houses. Mary’s Lane is one of the few remaining examples of how ordinary working class people once lived in small terraced houses in narrow lanes in Wexford.

The house with dormer windows mid-way along Mary’s Lane was used as a ‘Mass House’ during the days of the Penal Laws. When the prohibitions under the Penal Laws were relaxed, the house continued as a prayer centre. It was referred to as a chapel and school room in 1853, before the ‘Twin Churches’ were built on Rowe Street and Bride Street.

Until the ‘Twin Churches’ were built in the 1850s, Catholics in Wexford had no official parish church, and the town was served by this ‘Mass House’ and the Franciscan Friary chapel at the junction of School Street, Mary Street and Lower John Street.

The Catholic Young Men’s Society was founded in this house in the 1850s. when the CYMS moved to larger premises at Common Quay Street in 1856, the house returned to domestic use.

The Peter Street entrance to Mary’s Lane is flanked on both sides by old buildings that were originally used as malt houses, dating back to beginning of the 1800s. Today they are mostly used as storage facilities and as retail units by a local business, Colman Doyle Homestores. 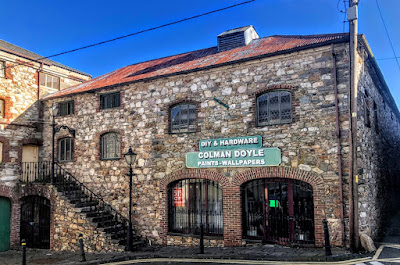 Mary’s Lane should not be confused with Mary Street, which was not is Saint Mary’s Parish, but was divided between three parishes: Saint Iberius and Saint Patrick’s at the bottom of the street, and Saint John’s at the top of the street.

Mary Street is a small and sloping one-way street that runs from the junction of School Street and Lower John Street down to High Street. In the 1970s, I lived first on School Street, and later on High Street.

In the past, Mary Street was once known as Chapel Lane, because of its small size and its close proximity to the Friary.

In the Middle Ages, Mary Street was the location of Raby’s Gate, sometimes called Friar’s Gate, or Keyser’s Gate, one of the six public gates that provided access to the walled mediaeval town of Wexford. 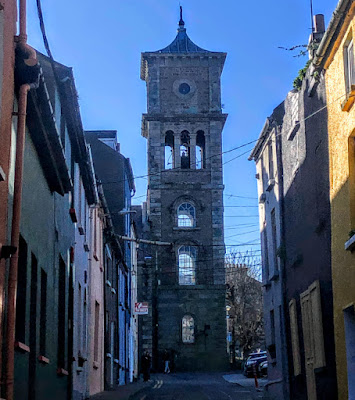 The bell tower of the Franciscan Friary framed by the houses of Mary Street (Photograph: Patrick Comerford, 2022)