The Lynders Farmhouse in Portane, has been in the possession of the Lynders family for 300 years since 14 March 1722 (Photograph: Patrick Comerford)

I was sorry that unexpected circumstances meant I missed the celebrations last Monday [14 March 2022] marking the three centuries of continuous presence of the Lynders family in Portrane, Co Dublin.

The Lynders Farmhouse was built in 1722 by my grandmother’s ancestor, John Lynders, and is the oldest house in Portane. My second cousin, Ger Lynders, now lives in the house, and is still proud of how he has lovingly restored and extended the family house.

John Lynders probably came to Portrane from Chipping Norton in Oxfordshire at the turn of the 17th and 18th centuries. An original family still in the position of Ger Lynders shows that 300 years ago last Monday, on 14 March 1722, he entered an agreement with the principal inhabitants of Portrane Common, Nicholas Carberry and Thomas Bath, to maintain the watercourse leading from the Commons of Portrane to the sea.

In return for this, John Lynders received a grant of part of the Commons of Portrane for a garden, to hold freehold. The agreement, witnessed by Owen Ward and Henry Moran, is still in the possession of Ger Lynders.

In addition, John Lynders received assistance from the William King (1650-1729), Archbishop of Dublin (1703-1729), in building the original Lynders house in Portrane. This means that – with Ger’s children and another generation there – ten successive generation of the Lynders family have lived in the same house for three centuries continuously, from 1722 to 2022.

Although the name Landers is found in Co Limerick, the name Linders is found across Europe, including the Netherlands, Germany, Sweden and Denmark, while in Belgium there is a family named Lindeers. 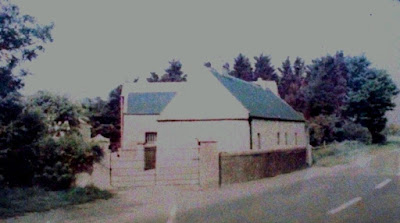 A photograph of the Lynders Farmhouse in Portane in the mid-20th century (Photograph: Patrick Comerford)

One theory says the family name is derived from Linden, the French for ‘lime trees.’ Another theory suggests the name is Lindars and of Swedish or Scandinavian origin. However, the surnames Linders and Lynders are found as variants of a family name more often found today as Lindars and that can be traced back to Oxfordshire as early as ca 1562. The earliest records of this family spell the name Lynders, but by 1700 members of the Oxfordshire family were spelling their name Linders and Lindars.

William Lynders (ca 1562-1624) may have been born ca 1562. He lived in Chipping Norton, Oxfordshire, about 25 miles north-west of Oxford, in the heart of the Cotswolds.

The descendants of this Oxfordshire family used the variants Linders and Lynders, and shared many of the first names of the Portrane family of the same name. From the 18th century, the spelling of their family name was standardised as Lindars.

It is believed the ancestor of the Portrane family may have first come to Ireland at the time of the Battle of the Boyne. The name is spelt, at different times, Linders, Lynders and Lunders, often in reference to one person.

A carving on the boundary wall recalls the date 1722 (Photograph: Patrick Comerford)

On 14 March 1722, John Lynders entered an agreement with the principal inhabitants of Portrane Common, Nicholas Carberry and Thomas Bath, to maintain the watercourse leading from the Commons of Portrane to the sea, in return for which he received a grant of part of the Commons of Portrane, Co Dublin, for a garden, to hold freehold. The agreement was witnessed by Owen Ward and Henry Moran. The original agreement, which is still in the possession of his descendant, Ger Lynders, 300 years later, was transcribed by Nancy Dockrell-Dempsey in 1985.

This John Lynders was the father of John Lynders (ca 1705-ca 1764), was the immediate of ancestor of the Lynders family of Portrane, including my paternal grandmother.

John Lynders (1798-post 1848), of The Burrow, Donabate, was born in 1798, and was baptised on 6 January 1798 (sponsors Thomas Duff and Catherine Donaugh). In 1848, he was a tenant of Joshua Evans for two portions of tillage in The Burrow, Donabate, and he was one of only seven freeholders in the Parish of Portrane, along with Evans of Portrane, Cobbe of Newbridge, Barnewall (Lord Trimleston) of Turvey, Arthur of Ballymadrough, Matthew Bates and William Davis. Among these freeholders, John Lynders and Mrs Sophia Evans were the only freeholders in ‘Portraine Demesne.’

The agreement, dated 14 March, 1722 and made between the Archbishop of Dublin and John Lynders, the original of which is in the possession of John’s descendent, Ger Lynders, reads:

Exec[uto]rs, Adm[inistrato]rs. and Assigns in consideration for the aforesaid house and garden were at all times to keep the watercourse leading from the aforesaid Commons of Portrane to the sea; clean and fit to receive and carry off the water of said Commons.

In witness whereof we have here unto set our hands this Fourteenth Day of March, one thousand, seven hundred and twenty two.

John Lynders do promise to perform the above.

An old ‘grandfather’ clock … part of the Lynders family since my grandmother’s time or a time even earlier (Photograph: Patrick Comerford)

Patrick, this is a wonderful history of the Lynders family. Joseph would have loved to learn of it, and I know David and Christine will! Thank you. Joan