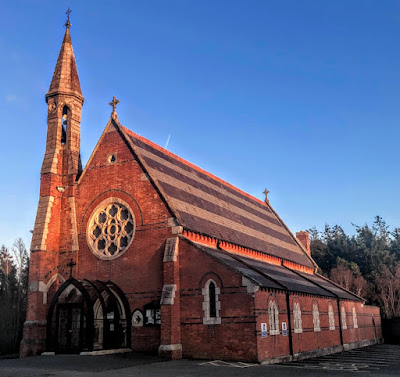 The Church of Our Lady Star of the Sea, Riverchapel,Co Wexford, designed by JJ McCarthy and his son CJ McCarthy (Photograph: Patrick Comerford, 2022)

On a visit to Co Wexford at the weekend, I stopped to see the Church of Our Lady Star of the Sea, Riverchapel, which is the Roman Catholic parish church for the seaside resort of Courtown Harbour.

It is said the history of the Riverchapel and Courtown area dates back to ca 600, when Saint Aidan, the first Bishop of Ferns, landed at Ardamine on his return from Saint David’s in Wales.

Saint Aidan established his first church at Kiltennel, although some sources say this was an earlier Christian foundation, founded in the late sixth century. 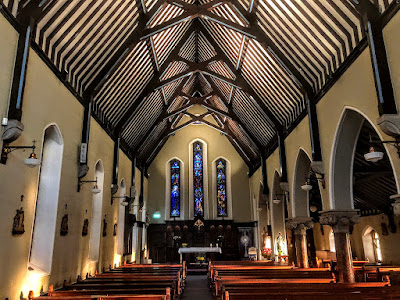 Riverchapel started as a small village in the parish of Ardamine, just 5 km south-east of Gorey. The name comes from a small mud-walled chapel beside the Owenavorragh River that served the community in the 1700s.

Courtown developed into a fishing village in the 1830s, and was endowed with long sandy beaches, woodlands and the rock-cut gorge of the river.

With the arrival of the railway from Dublin to Gorey and the south-east, both Courtown and Riverchapel became popular tourist destinations in the 1860s. 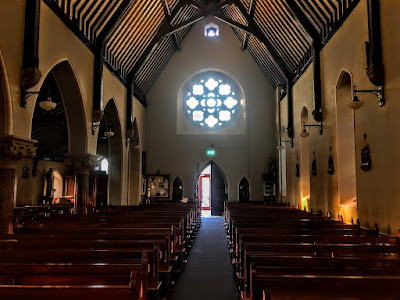 Inside the church in Riverchapel, near Courtown (Photograph: Patrick Comerford, 2022)

The Church of Our Lady Star of the Sea was built in the Gothic style with a bell tower at the north-west angle, to designs by the architect James Joseph McCarthy (1817-1882).

McCarthy had also worked on the ‘Twin Churches’ on Bride Street and Rowe Street, Wexford, and on Saint Aidan’s Cathedral, Enniscorthy, and claimed the mantle of AWN Pugin, the architect who introduced the Gothic revival in church architecture to Ireland.

Although officially JJ McCarthy was the architect of the church in Riverchapel, all the detail work was by his son, Charles James McCarthy (1858-1947), who made all of the drawings for the church in 1881, before overseeing its completion after his father died on 6 February 1882.

The foundation stone was laid on 1 May 1881, and the church was dedicated on 27 August 1882. James T Ryan of Waterford and Limerick was the contractor and Thomas Clifford of Enniscorthy was the clerk of works. 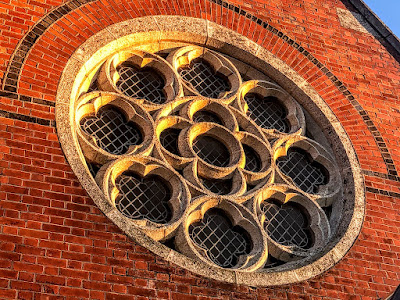 This church is an important part of late 19th century church history and architectural heritage of north Co Wexford. Its architectural composition has been compared with the earlier Catholic Church of Saint John the Baptist in Lispole, Co Kerry, with similar rectilinear plan forms, aligned along a liturgically-incorrect axis.

This is a six-bay double-height church, built on a rectangular plan with a six-bay, single-storey lean-to side aisle. It is built on a south-north axis, rather than the liturgically traditional east-west axis. 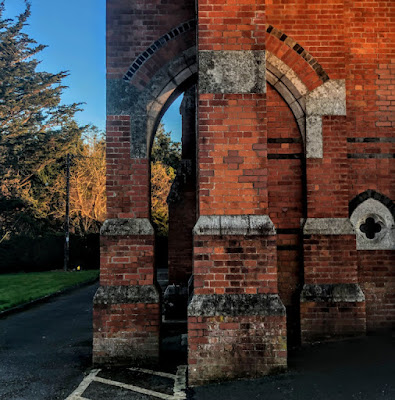 The vibrant red brick was supplied by the Courtown Brick and Tile Works. The silver-grey granite dressings show good quality workmanship and also produce an eye-catching Ruskin-style Gothic palette. The slender profiles of the windows and doors underpin a mediaeval-style Gothic theme. The flèche-like buttressed spirelet embellishes the banded roof and provides a picturesque eye-catcher in the landscape.

Inside the church, the interior details include trefoil-detailed timber pews, replacement Stations of the Cross (1967) between stained glass memorial windows (1949, 1980), an exposed scissor truss timber roof on cut-granite beaded Cavetto corbels, wind braced rafters in the ceiling on a carved timber cornice, a replacement Gothic-style reredos (1980) and the stained glass ‘Trinity Window’ (1943). 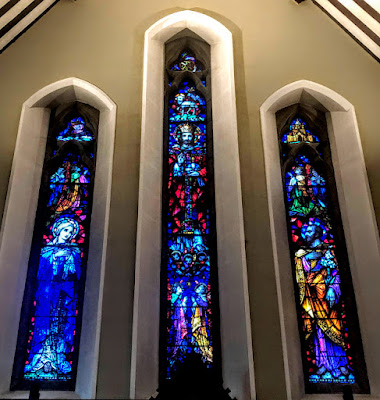 The Trinity Window defines the chancel and has been attributed variously to Harry Clarke, the Harry Clarke Studios, and to the Earley Studios (Photograph: Patrick Comerford, 2022)

Like so many churches throughout the Diocese of Ferns and Co Wexford, this church has a fine collection of stained-glass, including windows attributed to Harry Clarke and the Harry Clarke Studios.

The elegant Trinity Window defines the chancel. This jewel-like window depicts Christ the King, with the Virgin Mary (left), and Saint Joseph (right). It has been attributed variously to Harry Clarke, the Harry Clarke Studios, and to the Earley Studios.

Other stained glass in the church is signed by Irish Stained Glass and George William Walsh of Dublin. 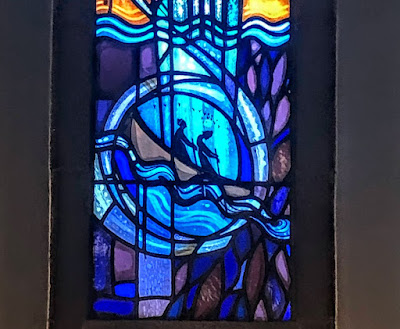 The windows and the memorials recall the association of Riverchapel and Courtown with the sea (Photograph: Patrick Comerford, 2022)

A memorial commemorates members of Courtown lifeboat station, which opened in 1866 and which was re-established in 1990.

The growing population in the neighbouring parish of Ballygarrett led to the formation of the new parish of Riverchapel-Courtown Harbour in 1991, with the late Father Aidan Jones, who had served the parish from 1980, as the first parish priest (1991-1995).

This church has been well maintained, and the elementary form and massing survive intact, along with quantities of the original fabric, both inside and outside. It is set in relandscaped grounds on a slightly elevated site, and it makes a pleasing visual statement in this coastal village. 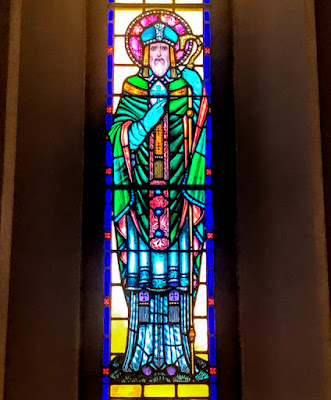