Francis Hutchinson, Rector
of Passeham who was
also a bishop in Ireland 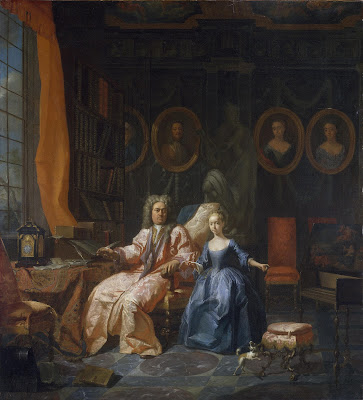 I took a walk along the banks of the Great Ouse River between Stony Stratford and Passenham during the weekend. Earlier, I had finished writing a magazine feature that refers to the church in Passenham, where the dedication to Saint Guthlac (674-715) is rare.

About 1,000 years after Saint Guthlac, Francis Hutchinson was the Rector of Passenham in 1706-1727, and was also Bishop of Down and Connor from 1720 until his death in 1739. He was a key figure in the Society for Promoting Christian Knowledge (SPCK) and was obsessed with witchcraft and with trying to convert Irish-speaking population of Rathlin Island.

But how did this 18th century bishop in the Church of Ireland find himself in this small parish in the Diocese of Peterborough and this small village in Northamptonshire, on the outskirts of Milton Keynes?

He was first a curate (lecturer) in Widdington, Essex (1684), and then became Vicar of Hoxne, Suffolk (1690). He became perpetual curate (vicar) of Saint James’s, Bury St Edmunds, Suffolk, in 1692 and resigned from Hoxne when he became the Rector of Passenham in 1706.

Throughout those years, Hutchinson was known for his low church latitudinarianism and his sympathy for Protestant dissenters. But he was also a key early figure in the Society for Promoting Christian Knowledge (SPCK).

Following the Hanoverian succession, Hutchinson was seen as a dependable Whig. He was a prolific writer, constantly writing pamphlets supporting the Whigs on the great issues of the day, such as the war of Spanish succession.

Although there was a widespread belief in and fear of witchcraft, witchcraft trials and executions were extremely rare. The last person in England was executed for witchcraft in Exeter in 1685.

Hutchinson began writing his book on witchcraft in the early 18th century while he was still in Passenham. By then, accusations of witchcraft continued to be made. Occasionally these led to trials, such as the trial of Jane Wenham in Hertfordshire in 1712.

Wenham was acquitted after a bitter and socially disturbing trial that Hutchinson attended. As a result, he became convinced that witchcraft trials posed a serious threat to public order and to social and political stability.

Through the influence of Francis Godolphin (1678-1766), 2nd Earl of Godolphin, Hutchinson became a royal chaplain on 17 March 1715. Then, on the recommendation of two leading Whigs – the Lord Chancellor Thomas Parker (1667-1732), 1st Earl of Macclesfield, and William Wake (1657-1737), Archbishop of Canterbury – he became Bishop of Down and Connor in 1720 following the death of Edward Smith.

Archbishop William King refused to consecrate Hutchinson, leaving the task to a commission formed mainly of English bishops, and he was finally consecrated bishop on 22 January 1721.

Hutchinson soon found he was thoroughly disliked by the other Irish bishops. John Evans, Bishop of Meath, was concerned by his lack of social skill and reluctance to socialise with the other bishops. Other bishops dismissed him as political appointee, eager to collect the income his see offered but indifferent to its spiritual needs. Indeed, he was more concerned with his temporal duties in the House of Lords than with his spiritual duties as a bishop.

In his own diocese, he was denounced by his largely Tory clergy for not being concerned about the large numbers of Presbyterians in the diocese. There, he continued to be a vocal supporter of the Whig and Hanoverian regime, but most of his literary output was concerned with matters religious and economic.

For Hutchinson, Catholicism posed the greatest threat to the Anglican status quo in Ireland. Yet he argued that the Penal Laws, passed from 1691, had failed to achieve the anticipated mass conversion of Catholics. Instead, he encouraged printing religious materials in Irish, such as the Book of Common Prayer, the catechism, a primer, the Psalms and the New Testament.

In his scheme to convert the Irish-speaking Catholic population of Rathlin Island, he built a charity school and church and printed a bilingual catechism, written in a new, easy-to-read, phonetic form of the Irish language he developed.

Hutchinson’s catechism (1722) used a more phonetic writing system that bore a closer resemblance to English than traditional literary Irish. He consequently increased the number of letters in the Irish alphabet from 18 to 26, and printed his Irish translations in a Roman typeface rather than the traditional Gaelic one. But his hope remained that English would supplant Irish as the common language.

He chose Rathlin Island as the site for a pilot scheme because it was one of the few places in his diocese with a large proportion of Irish-speaking Catholics. There was no resident Catholic priest resident on Rathlin to oppose his plans, and in 1722, the bishop confirmed 40 Catholic schoolchildren from Rathlin.

But his Rathlin project was controversial and eventually failed. His reforms of the written Irish language were mocked and condemned by his clergy and bishops. A squib on his versatility, published in Dublin in 1725-1726 as a broadsheet, is attributed to Dean Jonathan Swift.

Eventually, his experience of living among Catholics on his estate near Portglenone (1729-1731) convinced Hutchinson that only a small proportion of Irish Catholics were committed to a bloody rebellion or the slaughter of Protestants.

Hutchinson also wrote pamphlets on the social, cultural, and economic ‘improvement’ of Ireland, suggesting ways to develop fisheries, find employment for the large numbers of poor, make the River Bann more navigable, and drain the bogs around Lough Neagh.

Despite the hostility he faced, Hutchinson remained in the diocese until his death, living first in Lisburn and from 1730 at his new estate in Portglenone, Co Antrim. He died on 23 June 1739 at Portglenone, and was buried two days later under the chancel in the private chapel he built there in 1737.