Finding a Comberford
property in a lost parish
in Cheapside, London 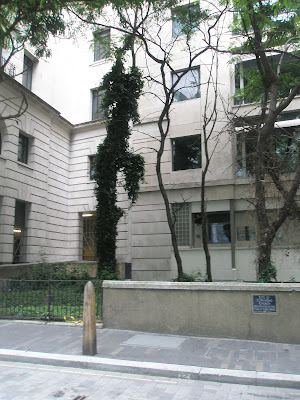 Two of us have been to London five or six times in recent weeks, but I still have to visit the site of Saint Pancras Church, Soper Lane, a church in Cheapside that was destroyed in the Great Fire of London in 1666 and never rebuilt.

This Saint Pancras Church and Soper Lane are of interest to me because in the early 16th century Thomas Comberford briefly owned part of the Lee Estate, associated with both a former Lord Mayor of London and with the Church of Saint Stephen Walbrook, which two of us visited earlier this summer.

Saint Pancras, Soper Lane, was a parish church in the Ward of Cheap. The church was of mediaeval origin, and was first built in the 12th century. The church was a small building, with a tower containing five bells, and there was a chapel on the north side.

The patronage of the church belonged to the prior and chapter of Christ Church, Canterbury, until 1365, when they granted it to the Archbishop of Canterbury. The vicarage stood on the corner of Pancras Lane and Queen Street.

Thomas Comberford seems to have succeeded to these properties following the death of Thomas Fyscher or Fisher. Comberford’s property in the area had passed through a number of families from the Middle Ages on.

Eventually, these properties passed to Sir Richard Lee or Leigh, who was twice Lord Mayor of London, in 1460 and 1469. Lee died on 4 March 1472, and was buried at Saint Stephen Walbrook.

His widow Lettice Lee, who made her will in 1477 – although it was not proved until 1489 – described herself as a citizen and freewoman (libera femina) of London, when she left the tenements in Soper Lane and Popkirtle Lane in Saint Pancras parish, and other properties, to the rector and churchwardens of Saint Stephen Walbrook, to find a chaplain to say Mass for the souls of herself and her husband, parents, and children, with a stipend of £7 a year.

Some of the rents, charges, and repairs of Lee’s estate in Saint Pancras parish survive in the parish records of Saint Stephen Walbrook from 1504 to 1548. In 1504 Thomas Fyssher, mercer, held the property at £9 rent, which he paid to successive churchwardens, by varying amounts, until 1511. Part of that rent was paid for Sir Richard Lee’s Mass requests, including £7 a year paid to their chantry priest. Some of the rentals were also used to pay for repairs to the properties.

Saint Stephen Walbrook received some of the rents from the properties owned by Thomas Comberford … Soper Lane was west of Walbrook (Photograph: Patrick Comerford, 2022)

Fysher appears to have been paying the £9 rent for a number of shops and houses together, and in 1512 or 1513 asked for allowance for several that were empty. He said that one shop had been empty for 10 years and another had been empty for five years, and he blamed this on the failure of the parish to repair the properties.

He also claimed that he had surrendered his lease, with five years remaining, on the churchwardens’ promise to repair the tenements, but they had spent only £7 in repairs. Fysher may have stopped paying his rent, and in 1513 the parish calculated that he owed £34 in arrears, but reduced this to £20, to be paid at £2 yearly, on his promise to pay the rent also.

The records are too scanty to say whether the parish undertook repairs at this period or not. But this seems to be the property that passed to Thomas Comberford within a short time.

Thomas Comberford paid £6. 15s. for three quarters’ rent in 1518-1519 and £9 for the whole year in 1519-1520. Repairs totalling over £10 were carried out in 1520 in ‘Master Lee’s lands’ in Saint Pancras parish. These included tiling, and paving the kitchen in Thomas Comberford’s house, repairs to a great oven and hearth in the tallow-chandler’s house, for which Comberford seems to have paid and been reimbursed, and making a lead gutter in the house of another of Comberford’s tenants, and a pipe in Sawnder Brown’s house.

Thomas Comberford disappears from the records of the parish soon after. He seems to be the same person as Thomas Comberford (1472-1532) of Comberford, a member of the Guild of Saint Mary and Saint John the Baptist, Lichfield, and a progressive farmer who, between 1511 and 1513, enclosed much of the land in the common fields around Comberford. In 1514, he secured full rights over the manor of Wigginton and lands in Wigginton, Hopwas, Coton, Comberford and Tamworth. He also acquired the manor of Watford, north of Daventry in Northamptonshire.

In 1519-1520, he served as Escheator of Staffordshire, the lawyer responsible for property lapsing to the crown or the lord of a manor when the owner died without heirs.

When Thomas Comberford died on 6 January 1532, his estates included the Manor of Wigginton with lands in Wigginton, Hopwas, Coton, Comberford and Tamworth; the Manor of Comberford; the right to hold a fair in Tamworth twice a year; the rights of fishery for a 2½-mile stretch along the River Tame from Lady Bridge, marking the boundary between the Staffordshire and Warwickshire parts of Tamworth, to Hopwas Bridge, and the right to keep six swans in the river.

The Parish of Saint Pancras in Cheapside was small but had some wealthy residents, and the church received various benefactions. The church was presented with a monument commemorating Elizabeth I by Thomas Chapman in 1617. The renovation of the building in 1621 was financed by a group of benefactors, including Chapman, and a porch was added in 1624, paid for by Chapman’s son.

Along with the majority of churches in the City, the Church of Saint Pancras, Soper Lane, was destroyed in the Great Fire of London in September 1666 and was not rebuilt. he site is now a small open space marked with a blue plaque in what is now named Pancras Lane. The parsonage house on the corner of Pancras Lane and Queen Street was leased out for 40 years at an annual rent of £2, in 1670. Soper Lane was rebuilt after the Great Fire, and was renamed Queen Street in honour of Catherine of Braganza, wife of Charles II.

One of the churchwardens of this combined parish is the warden for Saint Pancras Soper Lane. 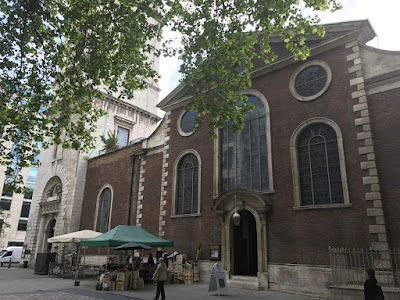