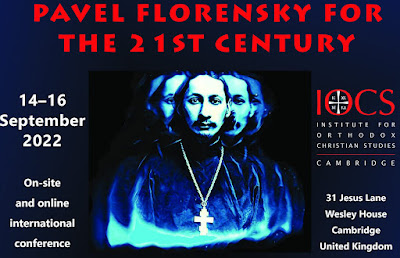 For many years, I enjoyed the annual conference in Cambridge organised by the Institute for Orthodox Christian Studies.

For almost a decade, these conferences usually took place in Sidney Sussex College, Cambridge, and from 2008 the IOCS played an important role in my continuing education and in my spiritual growth. As a student of IOCS, I was interviewed in Cambridge five years ago for a video on the work of the institute.

So, I am disappointed that my health and personal circumstances mean I cannot take part in the international conference being organised by IOCS this year. The IOCS International Conference 2022 – ‘Pavel Florensky for the 21st Century’ – takes place from 14 to 16 September in Cambridge.

The martyred Russian Orthodox theologian and priest Pavel Alexandrovich Florensky (1882-1937) was murdered on the night of 8 December 1937 in a wood near Saint Petersburg, and he is now regarded in Orthodoxy as a New Martyr and Confessor.

At the summer conference in Cambridge in 2014, Dr Christoph Schneider, Academic Director of IOCS, spoke on ‘Pavel A Florensky’s ‘Critique of Impure Reason’ and the debate about fideism and onto-theology,’ while Dr Natalia Vaganova from Saint Tikhon’s Orthodox University stimulated an unexpected discussion on the unusual working relationship between Father Floensky and Leon Trotsky in the early years of Soviet Russia.

Trotsky strongly believed in Florensky’s ability in the electrification of rural Russia, and there are contemporary accounts of the remarkable sight of Father Florensky wearing his priest’s cassock and cross as he worked alongside other leaders of a government department.

Although Trotsky asked him to wear a suit, Florensky insisted that while he had no parish he was still a priest, and insisted on wearing his cassock and cross and keeping his long priest’s beard. He continued to hold teaching and research positions until 1934.

This year’s conference in Cambridge is an on-site event taking place at Wesley House (14 and 16 September) and at Westcott House (15 September). Online participation is also available and the event will be broadcast via Zoom.

The conference, organised by IOCS Cambridge with Professor Bruce Foltz of Eckerd College, Florida, will explore the significance of Florensky’s work for both thought and life in the 21st century.

In 1904, at the age of 22, Florensky wrote that his aim was ‘to establish a synthesis of ecclesiality (tserkovnost) and worldly culture’ and ‘to honestly embrace all the positive teaching of the Church and the scientific-philosophical worldview together with the arts, etc.’

A decade later, in his early magnum opus, he begins by prescribing what he calls ‘living religious experience’— accessible through ascetic practice — as the ‘sole legitimate’ path to retrieve the treasures of Christian knowledge.

These statements by the young Florensky capture the main thrust of his intellectual oeuvre. His thought is characterized by a bold and extraordinary cross-fertilisation among philosophy, mathematics, science, art, and a wide range of other disciplines that is rooted in a theological vision of the world.

Trained in mathematics and physics, Florensky employed the scientific and mathematical paradigm changes that occurred at the beginning of the 20th century to articulate his integral Christian worldview and to set out his understanding of reality, knowledge, cult and human culture.

Human existence, he believed, unfolds at the boundary of immanence and transcendence, and the one-sided, post-Kantian attempt to investigate the world sub specie finite has ran its course with little to show for its efforts.

Florensky, however, was convinced that both these revolutionary scientific discoveries and the direct experience of spiritual realities served to undermine the anti-metaphysical and positivist orientation that dominated the second half of the 19th century, paving the way for what he would later call a ‘concrete metaphysics’.’

Much of his work remains under-researched, especially in the West where his writings are only beginning to be translated. The conference seeks to help overcome this gap.

The main aim of the conference is to investigate the fruitfulness of his ideas for the task of thinking in the 21st century. Speakers are invited to analyse any aspect of Florensky’s work. For instance:

• How far can Florensky’s notion of ‘living religious experience’ be grasped as a reinterpretation or development of the noetic illumination of Byzantine mysticism?

• To what extent does his understanding of ‘experience’ resonate with the phenomenological reduction that originated in Western Europe at the beginning of the 20th century?

• Can Florensky’s ‘concrete metaphysics’ be read as a metacritique of the post-metaphysical orientation that dominates — in the wake of Wittgenstein and Heidegger — contemporary philosophy?

• Are there affinities between Florensky’s ‘concrete metaphysics’ and William Desmond’s metaxaology and his notion of the ‘intimate universal’?

• How valuable are Florensky’s theological reflections on sacrament and liturgy articulated in his lesser-known anthropodicy?

• How are we to (re)interpret Florensky’s work within the horizon of contemporary thought?

• And, not least, to what extent does Florensky’s appeal to ‘immediate experience,’ as purified through asceticism, help to ‘pass a damp sponge over the ancient writings’ that the Church has treasured, unlocking the riches of patristic spirituality for contemporary life?

The confirmed conference speakers, so far, are:

To register or for more information please visit HERE.