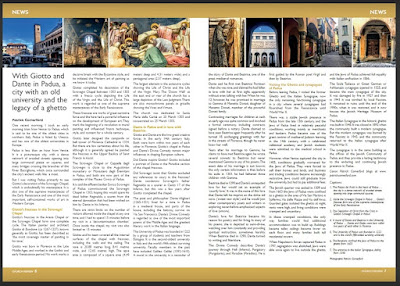 A two-page illustrated feature on Padua in the February 2022 edition of the ‘Church Review’, the Dublin and Glendalough diocesan magazine

Sometimes anniversaries can come and go with a note of forgetfulness rather than nostalgia. I was reminded the other day that it is 20 years this summer since I left The Irish Times in the summer of 2002, and it is 50 years since I joined the Wexford People as a staff journalist in the summer of 1972.

I must seem unkind in my forgetfulness at times when it comes to birthdays or anniversaries. But it’s a trait that probably provides an insight into why I cannot recall the exact dates when I joined the Wexford People 50 years ago and left The Irish Times 20 years ago.

I was reminded of these anniversaries, of starting at the Wexford People and leaving The Irish Times, when I read a few days ago that Paul O’Neill is retiring as the Editor of The Irish Times.

I had worked as a journalist for over 30 years, starting as freelance contributor to the Lichfield Mercury and the Tamworth Herald, followed by almost three years with the Wexford People and almost 28 years with The Irish Times, the last eight as Foreign Desk Editor.

The past 20 years have brought their own changes and challenges too. By then I had been ordained for two years. I worked for four years with the Church Mission Society, and combined that with four years of part-time academic life, lecturing in church history and social theology, before becoming a full-time academic, lecturing in liturgy and church history in the Church of Ireland Theological Institute and becoming an adjunct assistant professor in Trinity College Dublin.

I continued in priestly ministry throughout those years, as an honorary curate in Whitechurch parish, Dublin, and a canon of Christ Church Cathedral Dublin. I spent the last five years as the Priest-in-Charge of the Rathkeale Group of Parishes in west Limerick and north Kerry, and Canon Precentor of Saint Mary’s Cathedral, Limerick, and Saint Flannan’s Cathedral, Killaloe.

I had planned on retiring some time this summer, but a stroke in mid-March brought that forward, and I retired on 31 March. Of course, one retires from an appointment or employment. But a priest never ceases to be a priest, and a writer or journalist never ceases to write.

When the Revd Stephen Hilliard was leaving The Irish Times to enter full-time parish ministry, the then deputy editor, Ken Gray, joked that he was moving from being a ‘column of the Times’ to being a ‘pillar of the church.’

Later, when I asked Stephen to define the different challenges of journalism and parish ministry, I was told: ‘In many ways they’re the same. We’re supposed to be comforting the afflicted and afflicting the comfortable.’

In my 30 or more years as a full-time journalist and writer, I had tried to work at the point where faith meets the major concerns of the world. That work has made me a witness to the great conflicts and disasters of the last century.

I have seen the evil consequences of the Holocaust in museums, memorials and synagogues. I have met the survivors of Hiroshima and Nagasaki and the children of Chernobyl. I have been in the midst of the Israeli-Palestinian conflict in the Middle East.

I have witnessed the evils of apartheid and racism, seen military occupation, poverty, and the deprivations of famine in Africa and South Asia, and talked and prayed with the victims of torture and violence.

I have family experiences of the social terror left behind by the old regimes in East Europe. I have friends who were tortured and exiled by the colonels in Greece but who went on to make major contributions to the arts, diplomacy and politics.

Through those years I have been inspired by the courage of people who refuse to become victims and instead become fearless and articulate witnesses to the truths that good can overcome evil, that there is hope in the face of oppression, that faith is not a mere comfort but can inspire, motivate and provide vision for what can be – for what must be.

Like many academics, over the past 20 years I have contributed chapters and papers to books and journals. But, after leaving The Irish Times 20 years ago, I continued to write regularly in other formats too. My daily blog has been a daily exercise. But I continued to write occasionally for The Irish Times, and only last month I contributed a news feature to the Wexford People.

I have written too for the Lichfield Gazette and CityLife in Lichfield, returning to the place where I began working as a journalist. I also wrote for a number of Church publications, including the Church of Ireland Gazette and the Church Times.

But perhaps the one enduring and continuing exercise in journalism was a monthly column that I wrote first for the Diocesan Magazine in the Diocese of Cashel, Ferns and Ossory, and then for the Church Review in the Diocese of Dublin and Glendalough.

It was first commissioned about a quarter of a century ago by the Revd Nigel Waugh when he heard me speaking in Saint Iberius Church, Wexford, about the Church of Ireland during the 1798 Rising. The column made brief appearances in other diocesan magazines in Limerick and Meath and Kildare, and eventually came to an end in the Diocesan Magazine with a new editor some years ago. But I continued to write for the Church Review until this summer.

For years, I had an encouraging and tolerant editor who rejoiced in my thoughts on a broad range of topics, from travels in Greece and Italy to the cathedrals of England and the thoughts of Samuel Johnson and TS Eliot to the church in China, Egypt and Romania.

Perhaps my ideas were eccentric or even eclectic at times. I was seldom controversial, but I hope I was always thought-provoking and that I provided one diocese with a window onto the world. The response of readers was always generous, and some have shared with me how, because of my column, they decided to visit places as diverse as Lichfield Cathedral and Crete and the Greek islands.

The diocesan website continues to describe it as ‘a very popular and informative monthly column.’

But, sadly, the time has come to sign off on this column too. All good things have to come to an end.

Nadine Gordimer, in a lecture in London 20 year ago, argued that a writer’s highest calling is to bear witness to the evils of conflicts and injustice. But that is the calling of a priest too. I shall continue to write.