Praying with USPG and the music of
Vaughan Williams: Thursday 8 September 2022

Scenes from the life the Virgin Mary in a window by Charles Eamer Kempe in the chancel of Saint Laurence’s Church, Winslow (Photographs: Patrick Comerford, 2022)

Today the Calendar of the Church of England in Common Worship marks the Birth of the Blessed Virgin Mary (8 September) and is celebrated as a Lesser Festival.

This morning [8 September 2022], I invite you to join me in listening to Vaughan Williams’s arrangement for the canticle Magnificat.

When Gustav Holst died in 1934, Vaughan Williams lost his greatest friend. He missed Holst for the rest of his life and invoked his spirit in several works of the 1930s and 1940s. His setting of Magnificat or the Song of Mary (Luke 1: 46-55), one of the three New Testament canticles, is one such work, looking back to the Holst of The Hymn of Jesus, which Holst dedicated to Vaughan Williams and was first performed in London 95 years ago on 25 March 1920.

Vaughan Williams composed this setting of Magnificat in 1932. While he was working on this setting, Vaughan Williams wrote to Holst explaining he hoped ‘to lift the words out of the smug atmosphere which had settled on them from being sung at evening service for so long (I’ve tried hard to get the smugness out; I don’t know if I have succeeded – I find it awfully hard to eradicate it).’

It was first performed 90 years ago at the Worcester Festival in 1932, conducted by Vaughan Williams with Astra Desmond singing the solo part of the Virgin Mary.

Vaughan Williams later produced another arrangement for a Dutch chamber orchestra based in The Hague in November 1937, but four months later he ‘had no acknowledgment & no word of any kind from them.’ He expressed his frustration about this in a letter to his publisher, Hubert Foss of the Oxford University Press, written on 25 March 1938.

This is an unusual setting of the text. After an ethereal opening, a contralto/mezzo-soprano soloist sings the text while the female chorus interpolates with other texts in praise of the Virgin Mary. The contrast between the rhapsodic lines of the soloist and the more reflective emotions of the chorus results in a moving work.

At the bottom of the first page of the vocal score of Magfiicat is a note in very small type: ‘N.B. This setting is not intended for liturgical use.’

Hail, thou art most favoured,
The Lord is with thee: blessed art thou among women.
The Holy Ghost shall come upon thee,
And the Power of the Highest shall overshadow thee:
Therefore that holy thing which shall be born on thee shall be called the Son of God.

My soul doth magnify the Lord,
and my spirit hath rejoiced in God my saviour,
For he hath regarded the low estate of his hand-maiden:
For, behold, from henceforth, all generations shall call me blessed.
For he that is mighty hath done great things;
And holy is his name.

Hail, Mary full of Grace.
The Lord is with thee.
Blessed art thou among women.
Holy, holy, holy, Lord God of hosts;
Heaven and earth are full of thy glory.
Glory be to thee O Lord most high.

And his mercy is on them that fear him from generation to generation. He hath shewed strength with his arm: he hath scattered the proud in the imagination of their hearts. He hath put down the mighty from their seats and exalted them of low degree. He hath filled the hungry with good things, and the rich he hath sent empty away. He hath holpen his servant Israel, in remembrance of his mercy; as he spake to our fathers, to Abraham and to his seed for ever.

Fear not, Mary: thou has found favour with God.
Behold thou shalt conceive in thy womb, and shalt bring
forth a son, and shalt call his name Jesus.
He shall be great, and shall be called the Son of the Highest:
And he shall reign for ever;
And of his Kingdom there shall be no end.

Behold the handmaid of the Lord; be it unto me according to thy word. 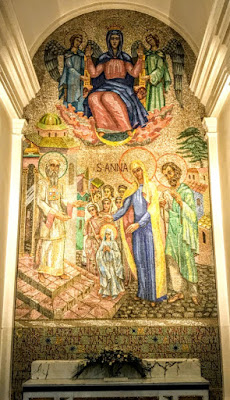 The Virgin Mary with her parents, Saint Anne and Saint Joachim, in a mosaic by the Russian artist Boris Anrep (1883-1969) in Mullingar Cathedral (Photograph: Patrick Comerford)

Almighty and everlasting God,
who stooped to raise fallen humanity
through the child-bearing of blessèd Mary:
grant that we, who have seen your glory
revealed in our human nature
and your love made perfect in our weakness,
may daily be renewed in your image
and conformed to the pattern of your Son,
Jesus Christ our Lord,
who is alive and reigns with you,
in the unity of the Holy Spirit,
one God, now and for ever.

God Most High,
whose handmaid bore the Word made flesh:
we thank you that in this sacrament of our redemption
you visit us with your Holy Spirit
and overshadow us by your power;
strengthen us to walk with Mary the joyful path of obedience
and so to bring forth the fruits of holiness;
through Jesus Christ our Lord.

Let us pray for countries in the Global South, which are disproportionately affected by the visible consequences of the climate crisis.