A sermon outline with USPG for
Advent II, 4 December 2022 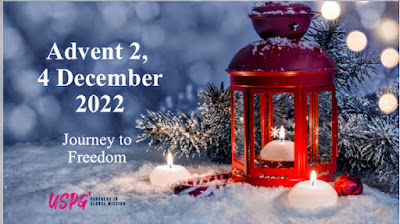 The Second Sunday of Advent
4 December 2022

1 In those days John the Baptist appeared in the wilderness of Judea, proclaiming, 2 ‘Repent, for the kingdom of heaven has come near.’ 3 This is the one of whom the prophet Isaiah spoke when he said, ‘The voice of one crying out in the wilderness: “Prepare the way of the Lord, make his paths straight”.’ 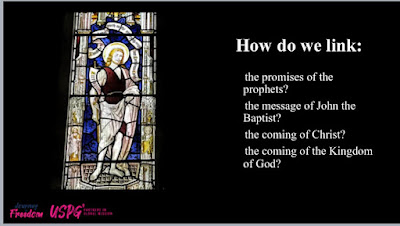 The Second Sunday of Advent, recalls the Prophets

Lighting the second candle on the Advent Wreath this Sunday, it is customary to think about the Prophets, leaving John the Baptist for the Third Sunday of Advent [11 December 2022], when the Gospel reading explains how Saint John the Baptist, and his mission point to Christ (see Matthew 11: 2-11).

On the other hand, this Gospel reading links with the promises of the prophets, anticipating the coming of the Messiah, telling us that the Kingdom of Heaven has come near, and quoting the Prophet Isaiah.

The introductory verses emphasise John’s preaching, not his baptising. John first and foremost is a prophet and a preacher, calling us to repentance, true conversion, turning around and reorienting ourselves.

John is like the one described by Isaiah as ‘the voice … crying out in the wilderness.’ Yes, we go on to hear a description of John’s baptising, but this Gospel reading places a greater emphasis on the meaning of that baptism and on the message of John.

Constantly, parallels are drawn between John the Baptist and the prophets, particularly Isaiah and Elijah.

Unlike Elijah, though, John performs no miracles; it is because of his preaching that John is identified as a latter-day Elijah. He fearlessly confronts the powers of the day, both secular and religious. John also heralds the coming Day of the Lord – which is part of the prophesy drawing on Elijah at the very end of the Old Testament (see Malachi 4: 5-6). In this way, John acts as a bridge between the Old Testament and the New Testament.

John’s preaching emphasises the coming of the Kingdom of heaven. The word used here for kingdom points first and foremost to God’s rule or reign, not to the realm over which he rules. As the Lord’s Prayer reminds us, where God’s will is done, there his kingdom comes. When God’s kingdom comes, his will indeed shall be done on earth as in heaven, and justice shall be firmly and truly established. And Advent is a time to prepare for, to anticipate, to look forward to the coming of those days.

Because the kingdom is at hand, John calls those who hear him to repentance. The word here means a change of direction, a change of heart, a change of mind. Those who take John’s preaching seriously must reorient their thinking, their priorities. Their whole outlook must change once they realise the nearness and the demands of God’s reign.

Is John trying to shock some of the people out of a false sense of security and into spiritual awareness when he uses strong language: ‘You brood of vipers! Who warned you to flee from the wrath to come?’

Christ has not yet arrived at the Jordan, but John’s message is not primarily about himself, but about the one who is to come (see verse 11-12), who is spoken of in apocalyptic images of the final judgment.

John’s promises about the promised, coming kingdom of heaven is linked with the prophetic call to make the Lord’s paths straight.

How do we make the Lord’s paths straight?

Where do people encounter difficult roads in their journey in life?

When do we allow ourselves to hear the cry of people in the wilderness?

The popular hymn ‘O Little Town of Bethlehem’ says that despite the dark places in the world today, ‘The hopes and fears of all the years / are met in thee tonight.’

As a sign, as a symbol, of how those hopes and fears are being met this year, USPG and the Church of North India sees the faces of Mary, Joseph and the Christ Child in the people being helped through this year’s Advent and Christmas appeal.

This is the Advent Hope and the Christmas present we can offer this year. The fears of those who cross borders, who face the threat of violence and the dangers of human trafficking, are being challenged by those who are working through the Diocese of Durgapur and USPG.

This is one way we can help to ‘Prepare the way of the Lord,’ to ‘ make his paths straight.’ With our support, they are no longer like voices crying out in the wilderness. They are heard, and through this work we became signs of our faith, or hope, in the promises of the coming kingdom. 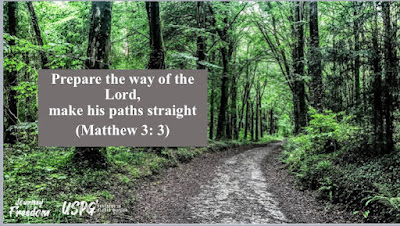 This sermon outline for the Second Sunday of Advent, 4 December 2022, was prepared for USPG (United Society Partners in the Gospel) and the ‘Journey to Freedom’ appeal in Advent 2022