Today is the Feast of Saint Nicholas of Myra (6 December 2022) , the ‘real Santa Claus’. Last night, instead of retelling the story of the bishop who risked his life when he defended Orthodox doctrine against the Arains at the Council of Nicaea in the year 325, I thought it would be interesting to follow in his footsteps, visiting or revisiting a number of cathedrals, churches or former church sites to which he has given his name.

Continuing this theme in a second ‘virtual tour’ this evening, I am visiting a dozen more churches, cathedrals and former church sites named after Saint Nicholas in England and Ireland.

The Diocese of Newcastle was formed in 1882, and Saint Nicholas Church became the most northerly cathedral in England. Saint Nicholas is a Grade I listed and dates from the early 14th century. For over 900 years it has been at the centre of the city’s spiritual and civic life and its memorials and ledger stones which reveal much of the heritage of the region.

The cathedral has one of the finest lantern towers in England, dominating the skyline since the 15th century. The architectural historian Sir Niklaus Pevsner describes it as ‘Four flying buttresses leaning against each other and holding up a tall square lantern, battlemented and pinnacled – a rare form of medieval crown in Britain.’

The cathedral retains substantial elements of its mediaeval fabric, as well as examples of work by prominent architects including Daniel Garrett, John and Benjamin Green, John Dobson, and George Gilbert Scott.

Inside, the cathedral has one of the largest collections of monuments and ledger stones in northern England. It has many mediaeval heraldic bosses and a fine mediaeval font with a contemporary wooden cover with elaborate gothic tracery. The 19th century chancel embellishments include wood and stone work by Ralph Hedley, Robert Beall and JS Westmacott. 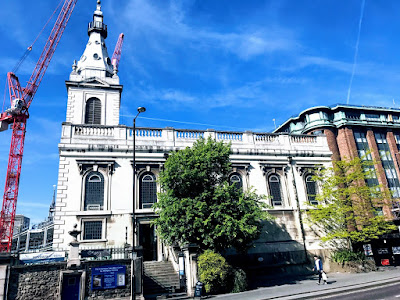 The church is named after Saint Nicholas of Myra, but was never an abbey. The name Cole Abbey is derived from ‘cold harbour,’ a mediaeval name for a travellers’ shelter or shelter from the cold. The earliest reference to the church is in a letter of Pope Lucius II in 1144-1145.

The church was rebuilt by Wren in 1672-1678, becoming the first church of the 51 lost in the Great Fire to be rebuilt. After World War II, the church was restored under Arthur Bailey and re-consecrated in 1962. 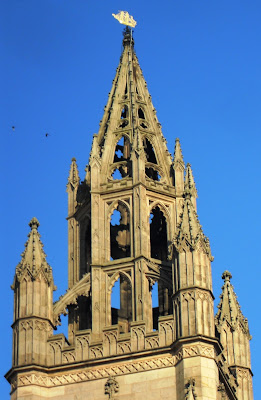 The Church of Our Lady and Saint Nicholas is the Parish Church of Liverpool (Photograph: Patrick Comerford)

The Church of Our Lady and Saint Nicholas is the Parish Church of Liverpool. The site is said to have been a place of worship since at least the 1250s. The church is close to the River Mersey near the Pier Head. The Chapel of Saint Nicholas was built on the site of Saint Mary del Quay, which in 1355 was determined to be too small for the growing borough of Liverpool.

Until 1868, the church was the tallest building in Liverpool at 53 metres (174 ft). The present church was rebuilt after World War II, and is now a Grade II listed building. There are daily services, and the church is open to visitors throughout the week.

King’s College Chapel plays a central role in college life, and is the most instantly recognisable and iconic building in Cambridge. In addition to being a place of daily worship during term-time, it is where new students matriculate, where Fellows are admitted, and where the choir performs concerts and records music for our own record label.

The chapel broadcasts ‘A Festival of Nine Lessons and Carols’ live on radio to millions of people every Christmas and every year pre-records new television services for both Christmas and Easter. 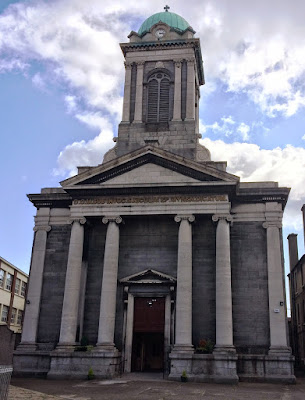 My great-grandmother, Anne (Doyle) Comerford (1834-1899) was baptised in Saint Nicholas of Myra Church, Francis Church, Dublin, on 25 August 1834, the year the church was completed. The church was designed by John Leeson, who also worked on the Pro-Cathedral in Marlborough Street, Dublin, and briefly on the plans for Saint Andrew’s in Westland Row. Building work began in 1829 and the church was opened in 1834 and dedicated in 1835.

The portico and tower, designed by John Bourke, were added in 1856-1860. This Ionic portico and Italianate tower, in granite and Portland stone, are probably the most striking features of the church.

At one time, the pediment was topped by statues of the Virgin Mary with Saint Nicholas and Saint Patrick on either side, but these have been removed. Inside, the church is neoclassical in style and is strikingly beautiful, brightly painted and decorated. 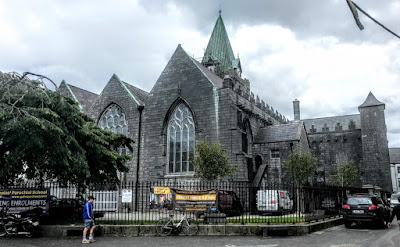 The Collegiate Church of Saint Nicholas, Galway … the largest mediaeval parish church in continuous use in Ireland (Photograph: Patrick Comerford)

Galway is a major port, and in the Middle Ages Saint Nicholas was revered as the patron saint of sailors and seafarers. The earliest parts of the church, the chancel, nave and transepts, date from the foundation of the church. Local legend claims Christopher Columbus worshipped there when he visited Galway in 1477.

The church was given the status of a collegiate church by Donatus Ó Muireadhaigh, Archbishop of Tuam, in 1484, the same year Galway received a Royal Charter and the right to elect a mayor. This collegiate status was confirmed by a papal bull issued by Pope Innocent VIII in 1485.

7, The Cathedral of Our Lady Assumed into Heaven and Saint Nicholas, Galway:

Inside the Cathedral of Our Lady Assumed into Heaven and Saint Nicholas, Galway (Photograph: Patrick Comerford, 2022)

The Cathedral of Our Lady Assumed into Heaven and Saint Nicholas, commonly known as Galway Cathedral, is one of the largest and most impressive buildings in the city. Construction began in 1958 on the site of the old city prison. It was completed in 1965, making it the last great stone cathedral to be built in Europe.

John J Robinson, the architect, had previously designed many churches in Dublin and around Ireland. His designs draws on many influences. The dome and pillars reflect a Renaissance style. Other features, including the rose windows and mosaics, echo the broad tradition of Christian art. The cathedral dome, at a height of 44.2 metres (145 ft), is a prominent landmark.

Saint Nicholas, the Church of Ireland parish church in Adare, Co Limerick, is a short walk from the village on the road out to Limerick City, on the banks of the River Maigue. The church was founded as an Augustinian Priory in 1316 by John FitzThomas FitzGerald, 1st Earl of Kildare. Once known as the Black Abbey, it is a fine example of a mediaeval Irish church, and remained a priory until the dissolution of the monastic houses in the 16th century.

The priory church was repaired and renovated in the early 19th century and became the Church of Ireland parish church in 1807, replacing the Manorial Parish Church of Saint Nicholas of Myra. This stood near the Desmond Castle and fell into ruins after 1806.

The refectory was roofed and converted into a schoolhouse in 1814. Between 1852 and 1854, a second restoration of the church was undertaken by Caroline, Countess of Dunraven. The church complex now includes the former Augustinian cloisters, a school dating from 1814, and the Dunraven Mausoleum, which dates from 1826. 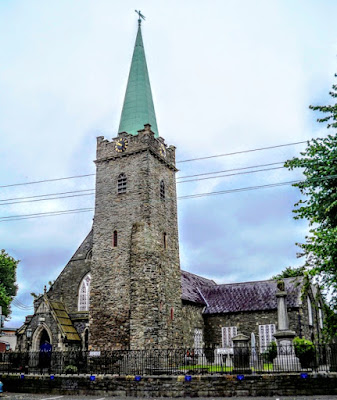 The parish church of Saint Nicholas in Dundalk, Co Louth, was built in the 13th century. Known affectionately as ‘the Green Church,’ it once had three chantry chapels. The tomb of Saint Richard of Dundalk, Archbishop of Dundalk, dating from 1370, was damaged at the Reformation. It was still identified as late as 1624, but its location is unknown today. The parish historian, HG Tempest, suggests he was buried on the site of the present chancel, was built between 1694 and 1706, in a place now behind the altar.

The church was extensively rebuilt and remodelled in the 17th and 18th centuries, and again by Francis Johnston in the 19th century, so that only the nave and tower date from the mediaeval period. In 1954, a side chapel under the gallery in the south transept was set aside to commemorate a former rector, the Revd JJ McClure, and was dedicated to Saint Richard. 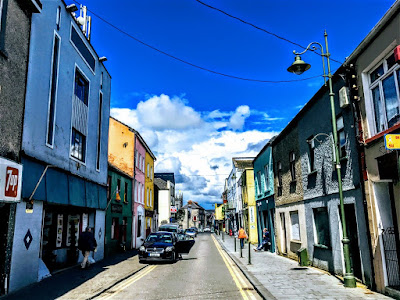 The church, between Saint Mary’s Cathedral and King John’s Castle, was one of the five mediaeval parish churches in Limerick. The Church of Saint Nicholas is mentioned in the Black Book of Limerick and was used by sailors and merchants. It was believed to have been a low roofed church with a parallel nave and had disappeared by the end of the 17th century.

The remains of Saint Nicholas Within (right) on the corner of Nicholas Street and Christchurch Place, Dublin (Photograph: Patrick Comerford)

Saint Nicholas Within was a Church of Ireland parish church in inner city Dublin. It stood on the corner of Nicholas Street and Christchurch Place, where part of its entrance may be seen next to the Peace Park.

The original church was built in the 11th century by Bishop Donat. It was dedicated to Saint. Nicholas of Myra by Archbishop Alexander de Bicknor (1317-1349), when the parish of Saint Nicholas was extended outside the city to include the Manor of Saint Sepulchre and the ainDeanery of St Patrick. The parish was divided into two parts: Saint Nicholas Within the Walls and Saint Nicholas Without.

The church fell into disrepair in the 17th century, and was rebuilt in 1707. By 1835, it was again having problems, and it was unroofed, although a chapel in the church, Saint Mary’s, continued to be used until 1847. It was planned to demolish the church and build a new one. However, this was never done, and the parish united with Saint Audoen’s in 1867.

The north transept of Saint Patrick’s Cathedral, Dublin, served as the Church of Saint Nicholas Without for several hundred years (Photograph: Patrick Comerford)

The north transept fell into disrepair in the 18th century, and the Lady Chapel (formerly called the French Church, as it had been used by the Huguenots) was rented by the parishioners of Saint Nicholas Without.

The north transept was rebuilt in 1822 and was used until 1861, when the parish of Saint Nicholas Without was united to Saint Luke’s. Saint Patrick’s Cathedral was renovated subsequently, and the north transept re-built.

An icon of Saint Nicholas in the Cathedral of Our Lady Assumed into Heaven and Saint Nicholas, Galway (Photograph: Patrick Comerford, 2022)