Sam Comerford, a Dublin
musician and composer
now based in Brussels 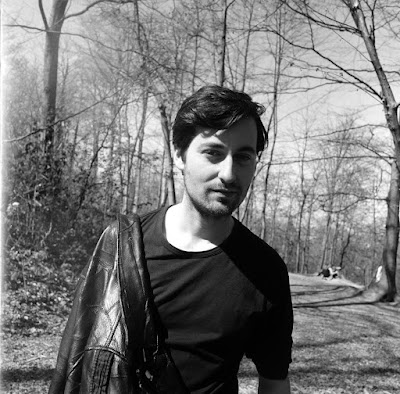 Sam Comerford is a musician and composer from Dublin (Photograph © Chloë Delanghe, 2020)

Sam Comerford is a musician and composer from Dublin now living and working in Brussels. He composes for and leads the trio Thunderblender, whose critically acclaimed debut album Stillorgan (WERF records, 2020) was described by RTÉ Lyric FM as ‘the estrangement of the familiar.’

He was born in Salem, Massachusetts, in 1991, and grew up in Stillorgan in suburban south Dublin. Starting with Irish traditional music, he played tin whistle and Irish flute from the age of nine. A love of the music of Charles Mingus made him take up saxophone at 15. After four years studying with Patrice Brun, he attended the Banff International Workshop in Jazz and Creative Music. Being surrounded by musicians such as Dave Douglas, Matana Roberts, Donny McCaslin and Drew Gress opened his mind to the possibilities of creative music.

Sam studied saxophone with Michael Buckley and composition with Ronan Guilfoyle, and he completed his BA in Jazz Performance at 21 in Newpark Academy of Music, Blackrock, now part of Dublin City University.

He then moved to Brussels to work on his master’s degree in Jazz saxophone from the Koninklijk Conservatorium Brussel, the Royal Conservatory of Brussels (KCB). There he studied saxophone with John Ruocco, composition with Kris Defoort, and rhythm with Stéphane Galland. At KCB he was awarded the Toots Thielemans Award, given to their most exceptional masters student.

As a saxophonist, Sam represented Ireland in the European Saxophone Ensemble from 2012-2014. Led by Guillaume Orti, the project premiered works from composers working in contemporary improvised music, and performing 22 concerts in 14 European countries. He represented Ireland twice in the 12 Points Festival, in 2015 and 2016.

Alongside his own musical activities he has a busy schedule touring and recording in projects incorporating elements of jazz, improvised music, and Irish music. These include performances at venues and festivals in Belgium, Britain, Canada, France, Germany, India, Ireland, Italy, the Netherlands, Switzerland, and Taiwan, with the Hayden Chisholm saxophone quartet and with the European Saxophone Ensemble, led by Guillaume Orti.

Sam Comerford leads Thunderblender, a trio from Brussels. Together with two trailblazers on the Belgian jazz scene, Hendrik Lasure and Jens Bouttery, they play Comerford’s dark and unpredictable compositions with joy and abandon. All three members are laureates of the ‘Toots Thielemans Award’ from the KCB.

Their music explores intense emotions, moving between order and chaos, free improvisation and intricate writing, heavy grooves and fragile intimate moments. This is a European band with a nod to the American avant-garde, influenced by Henry Threadgill and Tim Berne, with references to 20th century classical harmony.

Sam Comerford plays tenor and the rarely-heard bass saxophone, with playing that could be characterised as equal parts abrasive and lyrical. Jens Bouttery augments his drum set with left-handed bass synth, giving him complete freedom as a one-man rhythm section. Without a conventional bass player, Lasure is free to use the full range of the grand piano, sometimes with live sampling.

They released their debut album, Stillorgan, on 11 September 2020. It was recorded with producer Koen Gisen, in CD and LP formats on WERF Records. It was accompanied by a Belgian release tour in association with Jazzlab Series.

The album features Sam Comerford on tenor and bass saxophone and composition, with Hendrik Lasure, piano and effects, and Jens Bouttery, drums and bass synth. It was recorded and mixed at La Patrie in Ghent, Belgium, in 2019 and 2020, by Koen Gisen and was mastered by Rashad Becker at clunk.

Drawing on the mixture of heavy grooves and tender lyricism contained in their first EP Last Minute Panic (2017), this album offers an intensely personal statement from the bandleader and composer, Sam Comerford.

The album title Stillorgan refers to the Dublin suburb where Sam Comerford grew up. The sleeve was designed by Jelle Martens, and the cover photograph by Susan Keyes shows Sam Comerford with his father Will Comerford.

The album tracks reflect the core themes of family life and love which is affectionately conveyed through its intimate imagery. Given their impressionistic and haunting quality, reviewers say, the imagery is both opaque, and a glaring confrontation with that lived reality.

If ‘Lament’ offers a sense of contemplative flight, the LP’s single ‘Movin On’ brings the listener back to earth with its sense of urgency. Held together by Bouttery’s propulsive, syncopated groove, the track is driven forward by a lively conversation between Sam Comerford’s escalating and sinuous saxophone articulations and Lasure’s measured piano chords. This dialogue is propelled onto different sonic planes through its continually evolving and restless structure.

‘Doubt’ shifts gear once again by plunging the listener into an eerie, contemplative state.

‘Hope’ leaps from solemn reflection into buoyancy, where obtuse angular jabs propel the track along its zigzagging terrain: we are invited to a macabre carnival, a rhizomatic tap dance.

‘Arrival’ picks up the pieces from the carnage of ‘Hope’ by offering shimmering lyrical sound passages.

Like Samuel Beckett said of his play Not I, that the piece should ‘work on the nerves of the audience, not its intellect,’ Thunderblender’s ‘Panic Redux’ operates as its sonic equivalent, hammering out electrifying doses of distilled sound clusters.

‘Lights Out’ brings to the surface many of the melancholic themes that are lurking throughout the LP into sharp relief with a sparse compositional language that is at once haunting and densely layered.

Ian Patterson, writing on their 2017 debut EP Last Minute Panic All About Jazz, says: ‘Even in Thunderblender’s most intense improvisational flights there's an abiding sense of the three musicians locked on the same intuitive wavelength, whereby freedom and control are but two sides of the same coin. Gutsy yet melodic, rhythmically complex yet grooving, there's plenty to admire in this fine debut.’

Sam Comerford’s other projects include a solo saxophone album based on the music of Irish fiddler Tommie Potts, a second album with Thunderblender, and the soundtrack of experimental horror film Hexham Heads.

I would love to hear his 🎶 music!