It baffles how I can remember the telephone numbers in the houses I lived in as a child, and the registration numbers of family cars through my childhood, but I am unfailing in my capacity to remember crucial numbers that are important in life today, such as mobile number, my NHS number and even – especially at times when I am running short of cash – the number of my bank card for ATMs.

Throughout my life I have never learned to drive. But the memories of cars that drove through my childhood remain in my mind.

There was ZL 5776, the Morris Minor that seems to have stood outside my grandmother’s house in Cappoquin, Co Waterford, for many years.

There was the old Ford Popuar that stood in the yard of a neighbours’ house, stripped of its wheels and engines and wheels and packed full of soap boxes and that was always a joy for us to play in as children.

There was the model yellow Austin Mini that I hoped and wished Santa would leave for me under the tree one childhood Christmas. I was about nine, I think, and I crept downstairs in the middle of the night to find it and to play with it in the silence between Christmas Eve and Christmas morning. But from his bedroom above, my father could see the light I had switched on, casting its beams on the front garden. In his characteristic anger, he rushed down, promptly confiscated it, never to be seen again.

There was SZD 634, the Peugeot that seems to have been in the family though much of my childhood and my teens, taking me to school in Gormanston at the beginning of each school term, and only seen again at the end of term – but also taking us on family holidays to Bettystown, Co Meath, Virginia, Co Cavan, and Salthill, Co Galway.

There was the teenage friend in Rugeley who bought a second-hand (pr thrd- or fourth-hand) Merc, just for the fun of it, and another in Lichfield who drove around in a flashy beach buggy. I remember when I was in my late teens training as a chartered surveyor, and Sir Charles Wolseley was then a chartered surveyor with Smith Gore in Lichfield, driving a trademark red sports car around town, commuting daily between Lichfield and Wolseley.

There was Jemmer Murphy’s Capri in Wexford that we all wanted a lift in the early 1970s.

I never did learn to drive in my adult years. But many of those cars came to mind on New Year’s Day during the Stony Stratford Vintage and Classic Festival, and many similar cars were there to revive those childhood and teenage memories.

But some of the cars also caught my imagination on Sunday because of the family names associated with them.

I have long been intrigued by the genealogical connections between the Wolseley and Comberford families. On Sunday, one of the cars on proud display was a Wolseley 15/50 dating from 1958. It was repainted five years ago, but otherwise the car is in its original condition.

Herbert Austin introduced the first British-designed motor car in England in 1895 and adapted the name Wolseley in honour of his long-time employer, Frederick York Wolseley (1837-1899), a younger brother of Sir Garnet Wolseley.

Talbot was a luxury car manufacturer founded in 1903 by the Earl of Shrewsbury (Photograph: Patrick Comerford, 2023)

A 1934 Talbot BA 65/75 has coachwork by the Carlton Carriage Co. The name Talbot also features regularly in Comberford family history, and the talbot is one of the principal figures on the Comberford family coat-of-arms.

Talbot was an English-French luxury car manufacturer founded in 1903 by Charles Chetwynd-Talbot, 20th Earl of Shrewsbury, and Adolphe Clément-Bayard. Their business was based in Barlby Road, Kensington, London. In the depression in the mid-1930s, the business was bought by Rootes Brothers and in 1938, the Company was renamed Sunbeam-Talbot Limited.

The Talbot name died out in the 1950s, but it was revived under the ownership of Peugeot and used between 1978 and 1994.

Cars like this 1930s Talbot were designed by the talented Swiss engineer Georges Roesch. His designs were noted for their excellence of engineering and the use of high quality materials. His cars were considered as the luxury sportscars of the day.

This car was delivered in May 1934 and spent its early years in Yorkshire. It was later bought by Eric Marsden around 1943 when the mileage was about 20,000. Marsden later moved to the Isle of Wight and put the car away in his garage, undriven for 45 years until he sold to it the Talbot specialist lan Polson as a restoration project.

Ian Polson restored the chassis and sold the part-finished project to David Thompson, who carried out a full and very comprehensive restoration in the 1990s. The drophead coupe bodywork was built by the Carlton Carriage Company and has been fully restored to its original conditionAbout 150 Talbots of the 65 and 75 series remain. Originally, three cars built with bodies to this design, but it is believed that this car is the only survivor.

Riley was a family firm formed in Coventry in 1903, originally making cycles, having previously been involved in weaving machinery. It was famous for its wheels which were sold to 183 other motor manufacturers, including Rolls Royce.

Riley progressed from wire wheels through motorbikes and tricycles to motorcars in various works around Coventry. Most items were designed and made in house including the engines, for which they became well known when used in ERA racing cars and others. Riley’s won their class in many races around the world including Le Mans, Brooklands and various rallies.

Sadly many company documents were destroyed in the Coventry Blitz in 1940-1941, with loss of many definitive production records. It is thought that about 500-600 cars like this were produced, and about 120 are still identified and running around the world.

The Riley company was renowned for high-quality engineering and corporate integrity, claiming to be ‘As old as the Industry, as Modern as the Hour’. It succumbed to over production of too many types during the 1930s. Following financial difficulties, Riley was bought out by William Morris, later Lord Nuffield. After World War, the company was moved to MG at Abingdon, eventually becoming part of BMC then British Leyland where it continued making cars until 1959.

I wonder sometimes whether the name inspired singing of the bawdy song One Eyed Riley in The Cocktail Party by TS Eliot, or the more lavishly named Sir Henry Harcourt-Reilly. The name and IPR is now owned by BMW.

Childhood memories of car number places, of course, also drew my eyes to ZL 943, a 1949 version of the MG TD.

After World War II, MG wanted to bring out a new sports car, and so in 1949, as an interim design, they rebodied the pre-war TC model, with new front suspension and replaced the spoked wheels with solid metal wheels.

They only made a few of these before upgrading the engine unit, and also redesigning the dashboard instruments and piercing pepper-pot holes in the wheels to help cool the brakes. These last two changes are the only obvious sign of difference of this rare early model against the prolific TD made from 1950 onwards.

This MG TD was originally registered in Dublin, and when it was bought in 1967 for £180 it was in a shabby condition. ‘Zulu’ has always been in use, and is showing signs of age. It has e has never been restored, has been kept tidy, roadworthy and MOT’d … and it has been driven many miles round England and France over the years. 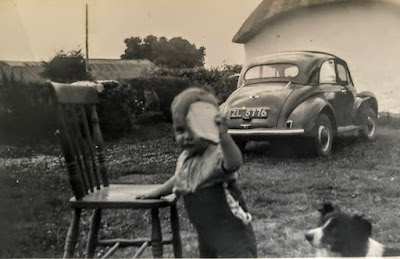