Saint James the Brother of the Lord 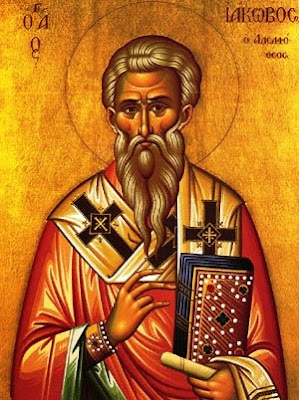 Collect: Lord God of peace: Grant that after the example of your servant, James the brother of our Lord, your Church may give itself continually to prayer and to the reconciliation of all who are caught up in hatred or enmity; through Jesus Christ our Lord. Amen.

Many years ago, when my friend Stephen Hilliard, Martin’s brother, was leaving The Irish Times ahead of his ordination, a senior editorial figure said he was moving from being “a column in the Times to being a pillar of the Church.”

This morning we commemorate someone we remember as a brother, a writer, a pillar of the Church, and a martyr: Saint James the Brother of the Lord.

This James is described in the New Testament as a “brother of the Lord” and in the Liturgy of Saint James as “the brother of God” (Iάκωβος ο Αδελφόθεος, Adelphotheos).

According to some, this saint was a son of Joseph, born to the wife Joseph was married to before he was betrothed to Virgin Mary. And so he was the brother or half-brother of the Lord, who was also seen as the son of Joseph (Matthew 13: 55). The brothers of Jesus named in the Gospels are James, Jude, Simon and Joses or Joseph (Matthew 13: 55; Mark 6: 3; see also Galatians 1: 19). Even Josephus in his Jewish Antiquities (20.9.1) describes James as “the brother of Jesus who is called Christ.”

However, the relationship of James and Jesus is difficult to unravel if one believes in the perpetual virginity of Mary. The Roman Catholic and Eastern Orthodox traditions say James was the half-brother or step-brother of Jesus and that Joseph already had children – that James was already a boy when Jesus was born.

But others point out that in Christ’s time Jews observed the Mosaic advice to married couples to be fruitful and to have many children, and so say Mary and Joseph must have had more children after the birth of Jesus.

Still others say that James could have been a nephew of Joseph, perhaps the son of Cleopas, also called Alphaeus, and Mary his wife. They point out that cousins could have been called “brothers” and “sisters” in the Aramaic of Jesus, and that the Greek words adelphos and adelphe were not restricted to their literal meaning of a full brother or sister.

Whichever opinion you accept, this James is the James who is called James the Less (Mark 15: 4) to distinguish him from James, the son of Zebedee, or James the Great, and who is also called James the Just because of his great holiness and righteousness. We identify him with the author of the Epistle of James. The Apostle Paul names this James as one of the people the risen Christ showed himself to (I Corinthians 15: 3–8), and describes James, alongside Peter and John, as a pillar of the Church (Galatians 2: 9).

When Paul arrives in Jerusalem with the money he has raised for the Church there, he speaks to James, and James insists Paul should ritually cleanse himself at the Temple to prove his faith and to counter rumours of teaching rebellion against the Torah (Acts 21: 18ff).

The Acts of the Apostles is silent about James after the year 60. However, according to Josephus in his Jewish Antiquities (20: 9), “the brother of Jesus, who was called Christ, whose name was James” met his death in the year 62, when he was condemned “on the charge of breaking the law.” He was thrown from the wall of the Temple on the day of the Passover and was stoned. As he prayed for his slayers, his head was crushed by a wooden club wielded by a scribe.

How many of us would like to be so close to Jesus that we could be called brothers or sisters of the Lord, still more “the brother of God” (Iάκωβος ο Αδελφόθεος, Adelphotheos).

So, whatever, the controversies around the interpretation of the title “Brother of the Lord,” we can give thanks this morning for James who was an early disciple and apostle, a witness to the Transfiguration and to the Resurrection, a reconciler and a mediator in the early Church, a pillar of the Church, the author of a New Testament epistle, and an early martyr.

Post Communion Prayer: Lord Jesus Christ, we thank you that after your Resurrection you appeared to James, and endowed him with gifts of leadership for your Church. May we, who have known you now in the breaking of the bread, be people of prayer and reconciliation. We ask it for your love’s sake. Amen.

Canon Patrick Comerford is Director of Spiritual Formation, the Church of Ireland Theological Institute. This reflection was shared at the Eucharist in the College Chapel on the Feast Day of Saint James the Brother of the Lord, 23 October 2008.
Posted by Patrick Comerford at 08:45