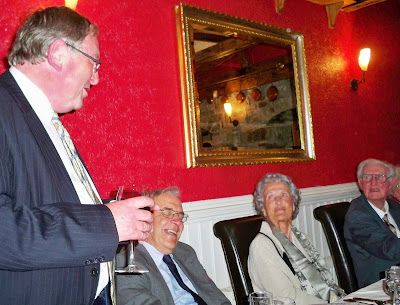 We toasted the Westport historian Dr Sheila Mulloy at dinner in An Carraig restaurant in Chapel Street, Castlebar, last night after the launch of the launch of a new book that looks at the key personalities involved in the 1798 Rising in Co Mayo.

The book, Victory or Glorious Defeat: Biographies of Participants in the Mayo Rebellion of 1798, is edited by Sheila and is the culmination of many years of work on her part.

It was a beautiful summer evening, and I had travelled from Dublin to Castlebar with another contributor to this collection, John Cooney, who has contributed a study of General Humbert.

The book was being launched by Dr Harman Murtagh, President of the Military History Society of Ireland, in Mayo County Library, which overlooks the Mall, which is at the heart of Castlebar.

Castlebar is the birthplace of Charlie Haughey, and the home of politicians such as Enda Kenny, Padraig Flynn and Beverly Flynn. But the history of the town dates back to a settlement that grew up around the de Barry castle, built in 1235 on the site of the present army barracks at the end of Castle Street. The town received a royal charter from King James I in 1613.

The Bingham family, who became landlords of Castlebar in the 17th century, later became Earls of Lucan, and the Mall was originally Lord Lucan’s cricket green. 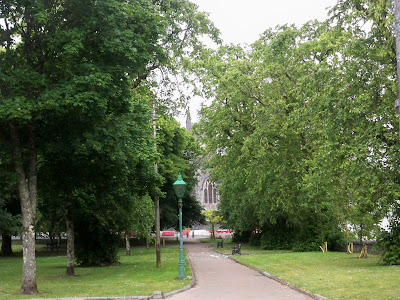 The Mall was Lord Lucan’s cricket grounds and linked the Bingham townhouse with the Church of Ireland parish church (Photograph: Patrick Comerford, 2010)

The present 7th Earl of Lucan is missing since 1974, but the Bingham family still owns large tracts of the town and of Co Mayo, and in the 18th and 19th centuries the Mall provided a link between the town house of the Earls of Lucan, formerly Lawn House and now Saint Joseph’s Secondary School, and the Church of Ireland parish church, Christ Church, diagonally across the Mall. 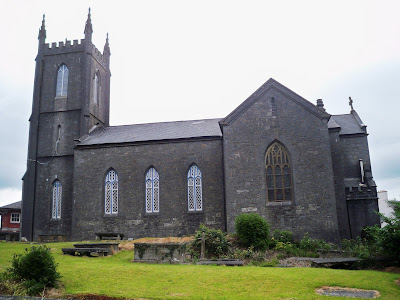 Church Church is one of the oldest surviving buildings in Castlebar (Photograph: Patrick Comerford, 2010)

Christ Church is one of the most important historical buildings in Castlebar, and at present there is an active fundraising programme for the restoration of the church roof. The churchyard has an elaborate but decaying memorial to Major-General George O Malley, a general in the British Army who fought in North America, Egypt, and the Mediterranean, and who was wounded twice at the Battle of Waterloo in 1815. He died in 1847 but is buried not in Castlebar but in his family burial plot in Murrisk Abbey. 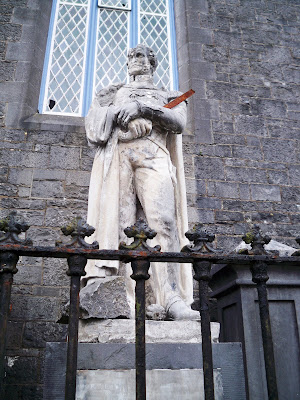 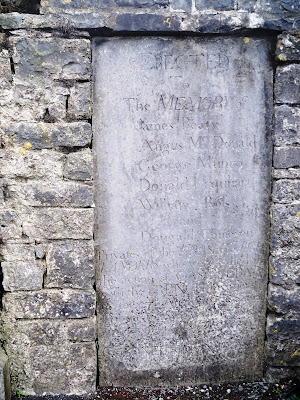 The gravestone of Frazier’s Fencibles is the only surviving contemporary record in Castlebar of the events in 1798(Photograph: Patrick Comerford, 2010)

Ellison was also rector of Castlebar during the dramatic events of 1798. Ellison and Bishop Joseph Stock were held captive in Killala Castle by General Humbert and his French forced. The church was badly damaged that year, and was renovated between 1800 and 1828. Inside the main gate of Christ Church is the only surviving contemporary record in Castlebar of the events in 1798: the gravestone of Frazier’s Fencibles, a Scottish Regiment killed in action in 1798.

The French forces under the command of General Humbert took part in a rout of the English garrison in the town – a rout that was so thorough it has passed into local folklore under the name of “The Races of Castlebar.” 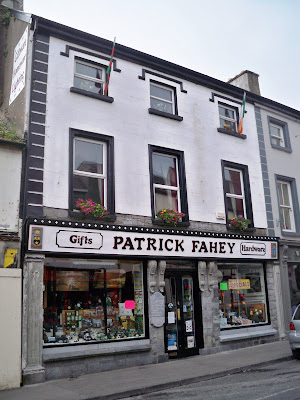 The site of Geevy’s Hotel, where General Humbert stayed in Castlebar … it was here too that John Moore was declared first President of Connaught (Photograph: Patrick Comerford, 2010)

A short-lived republic of Connaught was proclaimed, and General John Moore from Moore Hall, leader of the Mayo United Irishmen and the brother of a local landowner, was named president. He was reburied at a corner of the Mall in 1961, at the end the slope beneath Christ Church. 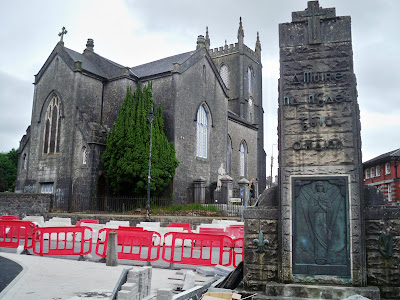 The 1798 memorial at the bottom of the slope beneath Christ Church ... the wording in Irish makes an unfortunate set of claims for Irish identity (Photograph: Patrick Comerford, 2010)

His grave is beside the 1798 Monument, erected in 1948 to commemorate the 150th Anniversary of the Races of Castlebar. It is such a pity that the inscription in Irish implies that the only true Irish identity is to be found in a particular expression of Catholicism.

On the opposite side of the Mall once stood the hanging tree where the rebel priest, Father Conroy was hanged in 1798. The tree stood beside the Methodist Church – John Wesley laid the foundation for the church just over a decade earlier in 1785.

Opposite the former Methodist Church and the site of the hanging tree, the former Imperial Hotel is falling into a serious state of disrepair. It has been closed for some years, and the asking price is said to be €1 million. It is hard to imagine that such neglect should be the fate of the famous hotel where the Irish National Land League was founded by Michael Davitt on 21 October 1879. 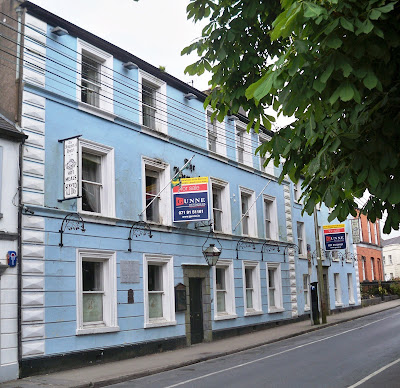 Please could you show the inscription on the 1938 monument to the rising: in Irish and in an English translation.