An early morning start in
the Hermitage in Lucan 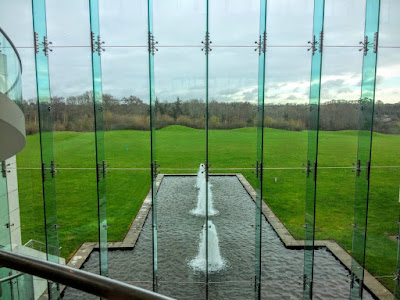 Over the last eight or ten years, I have been through the doors of most hospitals in Dublin, public and private.

I had an early morning start this morning with a visit to the Hermitage Medical Clinic, a 101-bed private hospital in Lucan, West Dublin. It is a teaching hospital of the Royal College of Surgeons, but my visit this morning was very different from my visit to the RCSI earlier this week for the ‘Surgeons and Insurgents’ exhibition on the Easter Rising of 1916.

Having taken a series of refresher courses last month on chaplaincy care, including the role of chaplains in hospitals, it was interesting to find myself as the patient instead today.

The clinic stands in the Liffey Valley, on grounds that slope down to the river, between the Hermitage Golf Club and the grounds of the King’s Hospital school.

The clinic and the golf club take their name Hermitage from folklore and the local story of the Five Knights and the beautiful maiden. The story tells of a knight and a maiden who eloped on horseback. The story says they were pursued by four gallant knights, also on horseback, who overtook the couple at the Hermit’s Cell.

A fight to the death ensued.

The maiden’s choice excelled as a swordsman, but the other four were equally brave. Four duels were fought in succession by the runaway knight. But at the end of the fourth encounter, five gallant knights lay dead on the emerald green sward. All five were buried nearby and from their graves sprang five lime trees that still cast their shadows over the waters of the River Liffey below.

The maiden was buried there too, but the lone slender whitethorn tree that marked her grave has long disappeared.

Another version of the story says the first knight was rejected by the maiden’s father and became a recluse in the cell at the Hermitage, but emerged in time to rescue her from an enforced and unhappy marriage.

In the chase, the suitor, rejected by the father, was pursued by five knights. Four were fell to the hermit’s sword-craft and the fifth failed in courage.

The only published version of this story is found in a rhyming ballad published in 1899. According to the ballad, the gallant hermit was revived in the hermit’s cell where he was nursed back to life by the maiden, who crossed to the Hermitage in a shepherd’s humble boat that “darts into a little creek”:

And ever in perpetual youth, they haunt the lovely dell,
All safe from foe or mortal ill, protected from a spell.
Nor doomed alone to human state, they various forms assume:
Perchance the cushat’s note is theirs, perchance with owlet’s plume
They flutter ’midst the noble limes, by Liffey’s gentle waves
Which daily shed a solemn gloom, upon the foemen’s graves.

Hermitage House was a large two-storey building over a basement with magnificent views of the surrounding wooded countryside and the banks of the River Liffey. It stands close to the site of the ruins of Ballyowen Castle. In 1650, a family named Nottingham lived there, but as Jacobites they lost their property about 1690.

It is said that Hermitage House was built 1700 for Major General Robert Napier. By 1740, the place was passed to the Hon Robert Butler (1759-1806), MP for Belturbet, Co Cavan, and later 3rd Earl of Lanesborough.

Sir Lucius O’Brien (1731-1795) became the owner about 1780. His country seat was at Dromoland Castle, Co Clare, and he had two famous grandsons and a famous granddaughter: Lucius O’Brien (1800-1872) succeeded was MP for Co Clare and later inherited a family title as the 13th Lord Inchiquin; William Smith O’Brien (1803-1864), was a leader of the Young Ireland revolution in 1848, was tried for treason, deported to Tasmania, but later returned to live in Co Limerick; and Harriet O’Brien (1811-1883) married Canon Charles Henry Monsell (1815-1850) of Saint Mary’s Cathedral, Limerick, and as the widowed Harriet Monsell she founded the order of Anglican nuns, the Community of Saint John Baptist, in Clewer, Windsor, in 1851.

Sir Lucius O’Brien was followed at Hermitage in 1798 by James Fitzgerald (1742-1835), who like O’Brien was also an MP for Ennis. He married into the Vesey or de Vesci family, who owned a large estate in Lucan. His wife Catherine later became the 1st Baroness FitzGerald and Vesey in 1826.

Meanwhile, what remains of the original Hermitage House within the present golf-club building suggests a villa that was built around 1800. Perhaps it superseded or incorporated an earlier house.

James Naper Dutton (1744-1820), 1st Lord Sherborne, later owned Hermitage. In 1818, he sold the house to his tenant, Robert Brennan, for £8,400, along with 139 acres of land on the banks of the River Liffey. By 1841, the Hermitage estate was the property of Sir John Kingsmill, a retired army colonel and a Governor of the Royal Hospital, Kilmainham. 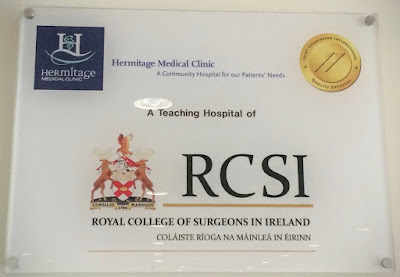 The Hermitage Medical Clinic is a teaching hospital of the Royal College of Surgeons in Ireland (Photograph: Patrick Comerford, 2016)

During World War I, a military hospital was established at the Hermitage in 1917. This was a convalescent and nursing home for wounded soldiers. The old wooden clubhouse was leased by the owner, a Mr Crozier, to be used as a place of rest for war-wounded and traumatised soldiers, and it was described as ‘the only shell-shock hospital in the country.’

Reading this part of the story of the Heritage area also brought me back to last Monday night’s exhibition in the Royal College of Surgeons on ‘Surgeons and Insurgents.’

In the 1930s the club leased Hermitage House from Mr Crozier, who was then the owner. The most distinguished of the founding members was Tim Healy, who was the first Governor-General of the Irish Free State in 1922.

A later member was Dr Douglas Hyde, a brilliant linguist and founder of the Gaelic League. He became the first President of Ireland, was remained in office until 1949. But his interest in sport is also an interesting one. He was a long-standing patron of the GAA but when he attended a soccer international at Dalymount Park the GAA was incensed.

Douglas Hyde was expelled from the GAA and never sought reinstatement. It was an act of bigotry that makes me question the values of those who claimed to be the early heirs of the insurgent of 1916. 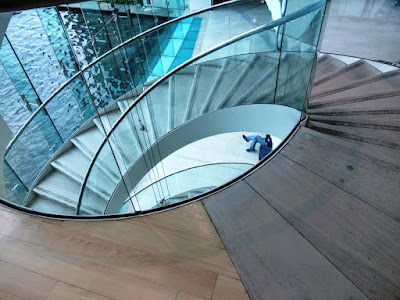 Coming down the stairs in the Hermitage … but what about driving afterwards? (Photograph: Patrick Comerford, 2016)

I was in the Hermitage Clinic, beside the golf club, this morning to have two growths removed from my head, one on my left temple and the other on the back of my head.

A similar mark on my nose is causing no problems, and is not even infringing on my vanity. But I was worried about these two. I wondered that perhaps they were growths related to my sarcoidosis, but I hope it has not spread from my lungs.

The results should be back soon.

I was told a few weeks ago that despite the anaesthetic I was not to worry and that I would be able to drive later.

Wonderful. I failed abysmally at my efforts to learn to drive over 35 years ago … failing to take a car from Dorset Street to Terenure, even after 20 driving lessons.

It reminded me of the popular piano joke that dates back to at least 1909.

Patient: “Will I be able to play the piano after the operation?”

Patient: “That’s great! I was not able to play the piano before.”

Meanwhile, I have found another interesting place for riverside walks. And, while I have sarcoidosis, sarcoidosis does not have me.