Richard Church (1784-1873):
an Irish Anglican in the Greek
Struggle for Independence 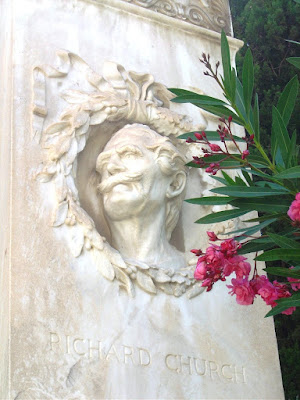 Image of Sir Richard Church from his grave in the First Cemetery, Athens. Photograph: Patrick Comerford

The poet Lord Byron and the Philhellenes are often portrayed as English romantics who devoted their lives to the cause of Greek independence in the early 19th century. But there were Irish Philhellenes too, including Sir Richard Church (1784-1873), who has been described as the ‘liege lord of all true Philhellenes.’ This forgotten Irish hero is commemorated in windows and memorials in Saint Paul’s Anglican Church in Athens, where a plaque claims he won the affection of the people of Greece ‘for himself and for England.’ Yet Church was Irish-born and his commitment to Greece was fired by his faith as an Anglican.

Church took part in the capture of Kephalonia, Ithaki, Lefkhada, Zakynthos and Kythera. He wrote home: ‘The Greeks, who are slaves to the Turks and are Christians, are ... a brave, honest, open generous people.’ He soon began providing military training for Greek revolutionaries, including Theodoros Kolokotronis, who became the pre-eminent general in the Greek War of Independence. Church recruited the Greeks troops who captured Paxos and the town of Parga on the mainland, and assisted in the negotiations for the surrender of Corfu. By then, he had become ‘more Greek than the Greeks.’

One of his first actions was a disastrous attempt to drive off a Turkish force besieging the tiny Greek garrison in the Acropolis in Athens. But he soon rallied his forces and stirred a fresh rebellion across the northern Peloponnese. A major turning point in the War of Independence came at the Battle of Navarino, the last sea battle of the age of sail. Thanks largely to the actions of Church and Gawin Rowan Hamilton, an Irish officer in the British navy, a large Turkish naval force was defeated in a four-hour battle in October 1827. Turkey’s naval power was broken and Church rejoiced at what he called “this signal interposition of divine Providence.”

King Otho (r. 1832-62) restored Church to the rank of general and appointed him Inspector-General of the army. But Otho was a despot, and in 1843 Church played a key role in a coup d’état, presenting the king with an ultimatum that demanded reforms or his abdication. Otho later took his revenge on Church, dismissing him as Inspector-General. But Church remained a life senator and during the Crimean War (1853-56) he was recalled as a general. A popular revolt in 1862 finally forced Otho to abdicate.

In all, 31 people of Irish birth or with an Irish identity took part in Greek political life during the struggle for the independence and consolidation of the modern Greek state. But, unlike Byron, few of the Irish Philhellenes were romantics: their motivations were often political, and many saw the cause of Greece as the cause of an oppressed and persecuted Christian people. Church, who often travelled with nothing more than his Bible and his sword, believed the Greek struggle was a holy war.

The inscription on the brass tablet below the two-light north window was composed by the British Prime Minister, William Gladstone, who unveiled the plaque in 1873. The south windows were presented in 1875 by the Church family, including his nephew, Richard Church, Dean of Saint Paul’s Cathedral, London, and a friend of Newman and the Tractarians.

Patrick Comerford is Lecturer in Anglicanism and Liturgy and Church History at the Church of Ireland Theological Institute and a canon of Christ Church Cathedral, Dublin.